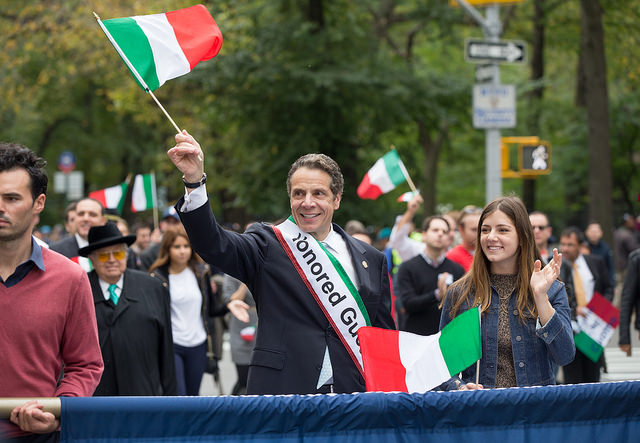 Despite major Republican victories across the state (and country), a number of Latino legislators and immigrant advocates say they expect New York Governor Andrew Cuomo to make the DREAM Act a priority next legislative session.

These stakeholders expect action not only because Cuomo campaigned on the issue and included mention of it in his victory speech, but because urban districts delivered big for him during the Democratic primary and general elections while other areas of the state showed little enthusiasm for his re-election.

"No one has gotten assurances," said one source who asked for anonymity, "But we are pretty bullish on this. The fact that the Senate Democrats lost hoists the responsibility on the governor. There was a chance last year that [State Senator Jeff] Klein could get something through, but the situation in the Senate is so bad that the DREAM Act is screwed without Cuomo's leadership."

Latino legislators began a push to make the DREAM Act part of the governor's next budget proposal during the post-election Somos Conference in Puerto Rico. The legislation would allow the State to provide college tuition assistance to undocumented immigrants going to school in New York.

This past March, during the Albany iteration of the Somos conference, legislators made a similar effort. At that time, Cuomo refused to agree to put the act in his fiscal year 2015 budget, but pledged to continue to support the act. The bill came to a rushed Senate vote last year and failed 30-29.

Sen. Jose Peralta, the lead sponsor of the DREAM Act in the Senate, told a crowd gathered to watch President Barack Obama's announcement of his executive order on immigration last week that he believed Cuomo would make the DREAM Act part of his executive budget, according to the New York Observer. However, in a subsequent interview with Gotham Gazette, Peralta said it was "too early to make predictions."

Sen. Adriano Espaillat said he wants Cuomo to include the DREAM Act in his next budget and says that past bipartisan achievements have demonstrated a way forward on the DREAM Act. "While Senate Republicans have repeatedly taken anti-immigrant positions, I am optimistic we can pass a DREAM Act in 2015," Espaillat told Gotham Gazette. "My 2002 legislation allowing undocumented immigrants to qualify for reduced tuition at CUNY and SUNY schools passed a Republican-controlled Senate almost unanimously, and Republicans have been pressured before in allowing successful votes on marriage equality and gun violence protections."

Republican leader Sen. Dean Skelos refused to link The DREAM Act to legislative pay raises that have been discussed this month. "We're not doing the Dream Act, we're not doing minimum wage, we're not doing taxpayer financing," Skelos told reporters earlier this month when asked about a possible deal on legislative pay raises. Skelos has lumped the DREAM Act into Mayor Bill de Blasio's "liberal agenda" and de Blasio invested significant effort into ousting Republicans from the majority this election season - efforts that Skelos heavily criticized. And there's no indication that Republicans have any intention of letting that go.

On top of that, a number of Senate Republicans ran against the DREAM Act and other issues backed by New York City Democrats.

States such as Texas and California already have their own DREAM Acts on the books. Meanwhile, as elsewhere, Latino voters are becoming more of a force in New York state politics. Opponents of the act claim it would divert tuition assistance away from citizens.

The current version of the legislation sponsored by Peralta would establish a DREAM Fund commission that would be tasked with finding private money for scholarships for immigrant children. The commission would not be supported with state funds. Similar legislation has been pushed by Sens. Klein and Espaillat.

Advocacy groups like Make the Road New York staged protests at some of Cuomo's campaign stops and urged voters to make it clear to Cuomo that their support hinged on his commitment to passing the act.

Peralta said of himself and his fellow Democrats, "Despite the Republican wave we still have 30 votes in the Senate so [the bill] could still come to the floor. It could be in the budget, but it is too early to tell."

However, a number of sources in the Democratic conference insist that Cuomo will be the one to initiate action this year. They point out that Cuomo won by his highest margins in the Bronx and basically has the electoral profile of "a liberal New York City Democrat."

Cuomo dominated his primary opponent, Fordham law professor Zephyr Teachout, in the Bronx, Queens, and Brooklyn, but she ran up votes against him in upstate counties like Albany, Greene, Ulster and Dutchess County.

"Despite being a fiscal hawk, the governor really didn't do well with the kind of voters he would lose if he supported The DREAM Act," said one Democratic source. "He already lost them."

Scenarios being pushed by DREAM supporters include one whereby Cuomo introduces the act as part of the budget with the caveat that the program is phased in so that funding for the program does not immediately impact the fiscal picture. They imagine the governor and Legislature might negotiate a slightly "watered down" version of the act with Senate Republicans signing on in exchange for something most dear to them.

Peralta isn't thrilled by the prospect. "I don't know how much more watered down it could get. I don't know if I could support that as a sponsor," he said.

Legislators are preparing for the possibility that there could be significant back and forth on the DREAM Act in budget negotiations and that Cuomo may look to them to be the faces of the debate as he focuses on the bipartisan nature of any deal.

Some lawmakers believe Cuomo will be looking to make a splash on immigration issues this year to show he can marshall bipartisan effort on issues that are paralyzed by partisan bickering in Congress. They expect Cuomo sees 2015 as the year to act with 2016 another legislative election year and federal action always possible, especially as the parties seek to woo Latino voters heading into the next presidential and congressional contests. A Cuomo spokesperson did not return a request for comment.

Many Senate Democrats are still holding out hope around the future of Klein's IDC (Independent Democratic Conference). They note that mainline Democratic leader Sen. Andrea Stewart-Cousins has had talks with Klein and the IDC about a possible partnership and that the Republicans and the IDC have not formally announced any agreement. Republicans do not need the IDC to control the chamber this year but support would make things a lot easier. And, an agreement like one being rumored that would see the IDC agree to coalesce with Republicans through 2016 might serve as a firewall against a Democratic surge fueled by a Hillary Clinton presidential run.

Advocates say that action on the DREAM Act might actually bolster Republicans chances of holding on to the majority come 2016 because it will endear them to Latino constituents.

Earlier this month NYU announced it will allow undocumented students who have lived in the state for three years to apply for financial aid. Assembly Member Francisco Moya, lead sponsor of the DREAM Act in the Assembly, touted NYU's move in a statement: "I applaud New York University for taking this bold step forward. Although we must still act on the state level to pass the DREAM Act, so that all of New York's students are able to apply for financial aid, NYU's decision to act with compassion and vision is to be commended."