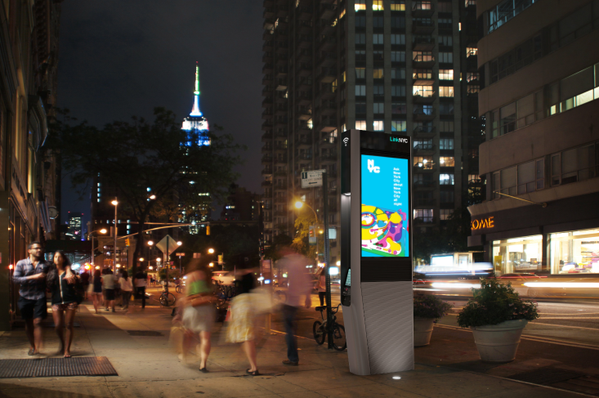 The NYC pay phone of the future (photo: DoITT)

NEW YORK—Officials from City Hall put on a full court press on Monday in their effort to get the contract approved that will turn the city's outdated pay phones into modern Wi-Fi hotspots.

Mayor Bill de Blasio's technology team gave its final presentation to the Franchise and Concession Review Committee (FCRC) in front of a filled-to-capacity auditorium near City Hall. The City needs the six member board to approve the new 12-to-15 year contract agreement by Wednesday to avoid having to go to the City Council for a new authorizing resolution, which could take months.

Hours before the the FCRC meeting the de Blasio administration sent members of the media a lengthy list of quotes from high profile officials and leaders in business and technology showcasing support for the proposed contract.

The presentation to the FCRC was given by a trio of officials including Counsel to the Mayor Maya Wiley. The mayor tapped her to lead the way on expanding internet access to all New Yorkers and the payphone Wi-Fi deal has been billed as an integral piece of that puzzle.

The City's presentation was very similar to the one made at the unveiling of the franchise winner on November 17. Speakers highlighted that the agreement will lead to hubs, known as "links," that will provide free calls to anywhere in the United States, free Wi-Fi access, charging stations, and, most importantly, high-speed internet to the neediest New Yorkers.

"This would be unprecedented, putting NYC at the forefront of innovation," Minerva Tantoco, the City's first Chief Technology Officer said.

On Monday, city officials revealed a little about the contractor selection process, saying that the winning bidder, CityBridge - a consortium of companies including Titan, Control Group, Qualcomm Incorporated, and Comark - submitted the strongest proposal of any of the seven bidders.

"No other proposal could match the strength of experience of the NYC-based CityBridge Consortium and their partners," said Anne Roest, commissioner of the Department of Information Technology and Telecommunications (DoITT).

Roest added that CityBridge also provided the highest-rated advertising plan, promising $200 million more in ad revenue than any other proposal. Later during public comment, Wiley mentioned this money could be used to help expand home internet access to poorer communities in the future.

Overall the public comments were in support of the franchise agreement, with only a handful of dissenters. A representative from Public Advocate Letitia James' office read a statement that urged the FCRC to reject the proposal as written. The representative said that while James supports the idea, she believes the City circumvented the Council's authority by not asking for a new authorizing resolution. In addition, James believes the agreement allows a monopoly, something that would violate the Federal Telecommunications Act of 1996.

"The competitive advantage and monopolization of services will leave New Yorkers beholden to one entity without the benefit of a competitive marketplace," the statement said.

The City has argued (and did again at Monday's hearing) that the franchise agreement does not create a monopoly because it is not an exclusive agreement. The winner of the RFP is a consortium of companies and in 12 years the City will have the option to add another company (or group of companies) if it so chooses.

James was the only public official to directly ask the FCRC to reject the contract. None of the 28 city council members who penned a letter to Mayor de Blasio earlier this year voicing their concerns about the possibility of the franchise being a monopoly testified or sent a representative to testify against the franchise agreement.

Telebeam, a company which currently owns roughly 700 pay phones in New York City, but lost its bid for the franchise agreement, also asked the FCRC to reject the contract. The company filed a suit against the City on Dec. 4, claiming the agreement is a monopoly and in violation of the Telecommunications Act of 1996.

Representatives from the borough presidents' offices and the city comptroller's office peppered de Blasio administration officials about how evenly the highest access internet speeds would be distributed among the boroughs. A Nov. 24 New York Daily News article slammed the administration saying the franchise agreement would only give the highest speed service (1GB) to richer neighborhoods where advertising revenue could be best generated.

During her opening remarks, Wiley offered some clarification in hopes of easing the worries of the electeds. She said her legal team reviewed the contract, "to make clear there is no relationship between the existence of advertising panels on a structure and the speeds offered by that hotspot."

Wiley said the contract will require 95 percent of the first 4,000 pay phones offer 1GB speed, the highest offered in the LinkNYC system. These 4,000 structures will replace the current pay phones, which are located throughout all five boroughs.

She also pressed that the decision to offer 1GB speeds would be based on the availability of fiber-optic cable, not location. Areas not getting 1GB speeds will still receive 100 megabit speed, which is nearly double the average home internet speeds in New York City.

"It will ensure that no matter ones' income level, one's neighborhood, all New Yorkers can get on this high-speed network in and crossing all five boroughs," Wiley said.

It appears the changes the City made to the contract between the time the Daily News article was published and Monday's hearing pacified those concerns. A representative from Stringer's office read a statement from the comptroller at the hearing which mentioned—without going into specifics—some "flagged issues," but including that his office was "working with City Hall to resolve" them. He did not recommend voting against the contract.

The FCRC will meet again on Wednesday, Dec. 10, to officially vote on the franchise agreement. If approved, CityBridge will begin negotiations with current pay phone owners to take over their structures.