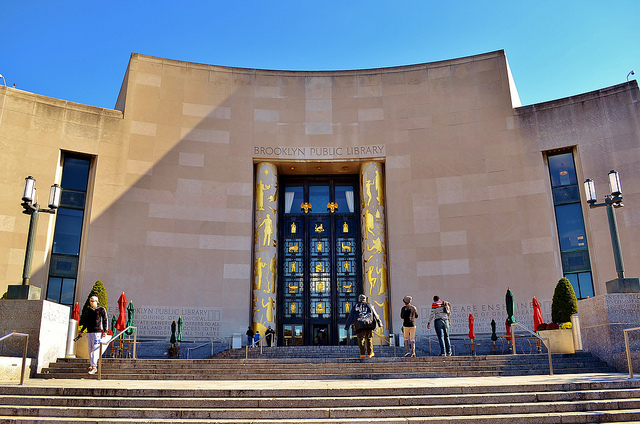 NEW YORK—As digital technology began to expand at the turn of the century, it seemed public libraries would go the way of the bookstore. After all, who needs paper books when you can download classics like Dickens' "A Tale of Two Cities" right to your smartphone or tablet?

It is true the demand for paper books has diminished (just ask any publishing executive). Digital is the undisputed way of the future, but that doesn't mean the library is dead. In fact, it's quite the contrary.

In fiscal year 2013 the city's 207 branch libraries saw nearly 36 million visitors, according to Re-Envisioning New York's Branch Libraries, a report from the Center for an Urban Future.

Libraries have evolved from a quiet place to curl up with your favorite paperback or cram for a midterm to a much needed community space. Libraries are a place for immigrants to learn English and a place where the unemployed can look for and apply to jobs. It's a social space for the booming senior population, a workspace for freelancers and entrepreneurs, and in some cases, the only place New Yorkers have access to a computer.

"No other institution is as well-positioned to help New York City address some of its biggest challenges and opportunities as the city's branch libraries," Jonathan Bowles, executive director of Center for an Urban Future, said at a Dec. 4 event to discuss the report.

But despite the ever-growing need in communities across all five boroughs, the City has not made funding libraries a priority. As of the recently-passed fiscal 2015 budget, the city's three library systems (the New York Public Library, the Queens Library, and the Brooklyn Public Library) have nearly $1.1 billion in capital needs. Of that, approximately $812 million is needed simply to bring the buildings into a state of good repair.

For now, the burden of funding these capital needs is largely falling on individual city council members and the borough presidents via their annual discretionary funding. Between fiscal year 2004 and 2013, 59 percent of the libraries' capital commitments were from council members or borough presidents, according to the report. Only 41 percent were funded from the overall city budget.

"I'm proud of the New York City Council's use of discretionary capital commitments to the branch libraries, but that is an absurd way to pay for an essential public infrastructure," Council Member Brad Lander said at the Dec. 4 event. "We can't have a 21st century library system with what we have been investing in the libraries in recent years."

At the event, which took place at the Japan Society in Manhattan, several teams of designers gave presentations on how they see the library system moving from a paper-based establishment to a modern community hub. Some of the ideas were simple and practical such as utilizing both the indoor and outdoor space better and upgrading the electrical systems to allow for more outlets and computers. But, more ambitiously, some of the proposals involved large-scale redevelopment of the libraries which would create housing above newly built library branches.

Proposals like this have already been made in Brooklyn Heights and, despite some of the advantages presented by developers, have been adamantly opposed by some community groups.

So how do we go from a $1 billion capital deficit in decades-old buildings to the modern library system described in the presentations? It will take time, planning, and more than likely public-private partnerships. The land the city's libraries are sitting on is incredibly valuable in today's real estate market, giving the City a valuable card to play.

On Wednesday the City Council's committees with oversight of libraries will further discuss the capital needs of the libraries, discuss the Center for an Urban Future Report, and look at some of the design suggestions presented at the Dec. 4 event.