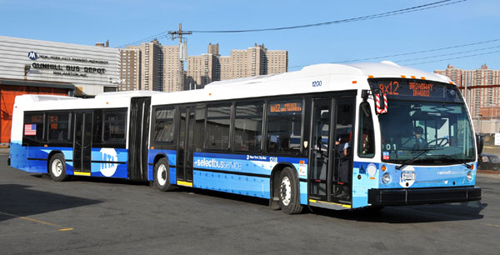 Few things are more annoying than waiting for a bus when the weather isn't good. You're cold, you're wet, and the bus schedule said it would arrive at 9:05. It's 9:21. Where's your bus?

Technological advancements have given New York City straphangers some relief with the Real-Time Bus app, which allows users to see how far away their bus actually is. More recently, a collection of city council members used discretionary funding toward more countdown clocks for additional bus stops, an especially useful tool for those without smartphones.

But what if your bus is always late? Sure, it's good to know how long you will have to wait (and maybe have time to grab a cup of coffee nearby to warm up) - but is anyone actually doing anything about it?

When Council Member Ben Kallos took office in 2014, he said slow or unreliable bus service was among his constituents' chief complaints. Kallos' district spans much of the Upper East Side and includes bus-heavy 1st and 2nd Avenues. The new council member began forwarding complaints to the MTA, but wasn't finding the relief he or his constituents were looking for.

Also a software developer, Council Member Kallos decided to see if the MTA provided data so he could see exactly which buses were consistently late and by how much. With that kind of solid data Kallos felt that he could then dive into the why, especially given his platform as an elected official.

"It is about being able to see systemic problems and being able to hold the MTA more accountable," Kallos said in a phone interview on Monday.

The MTA provided real-time data on buses, but no archival data. Kallos knew he had the skills to build a piece of software needed to turn the Bus Time data into archival data, but as has been the case since he took office a year ago, he realized his time for building software is limited. So he reached out to BetaNYC, a robust civic hacking community which for years has been taking city data and making useful apps and software.

Nathan Johnson, a software developer, heeded the call at a May BetaNYC event called CityCamp NYC. He began to work on a project that would take the real time bus data and turn it into archival data that he and others could analyze to find out exactly how often buses are early, on-time, or late.

The MTA, one of the few government agencies eager to give its data to civic technologists to build apps, agreed to help ease the process by releasing three months (August through October 2014) of archival Bus Time data for the latest Apps Quest competition.

Johnson took that data and built a web page showing the percentage of early, on-time, and late buses for each route in the city. So far the site shows September and October, but Johnson said in a phone interview he hopes to have an app complete to submit by the February 3 App Quest deadline.

The success of the project has made Kallos hungry for more data. On Monday he submitted a letter to the MTA requesting the release of archival bus data with greater frequency. Kallos argues the archival bus time data could help policy makers help solve a critical transportation issue in the city.

"We will be able to pull this data, look at how many buses are late, how many are on time, and how many never show up," Kallos said. "I am going to insist they deliver a quality service every New Yorker can depend on to get where they are going every day."

In addition, Kallos is asking the MTA for (handicap) accessibility information for their buses, bus stops, and subway stations in a machine-readable format, something Johnson hopes to incorporate into his app.

Thus far, the MTA has not released the November or December archival Bus Time data in a raw format, although MTA spokesperson Kevin Ortiz said the data was available in the MTA committee book reports released monthly on its website. He said more data would be released "once it's available," but did not give a specific time table.

"People have been wanting this data for a while," Noel Hidalgo, Co-Founder of BetaNYC, said by phone Monday. "If they have put up some, where is the rest?"

Hidalgo, who is also a civic technologist, noted how helpful historical data can be in determining usage patterns, citing Citi Bike data as a prime example. The City was able to look at peak times and stations for Citi Bike and make adjustments accordingly.

"Buses are this critical infrastructure link and right now people are scared of them because they take so long," Hidalgo said. "If I knew other buses were more consistent, I would add them into my transportation options."

Kallos, who only sent the letter to the MTA on Monday, says he has not gotten a response yet, but hopes the agency will consider his data request.

"Everyone knows bus service is a problem," Kallos said. "It will be nice to finally be able to prove it."