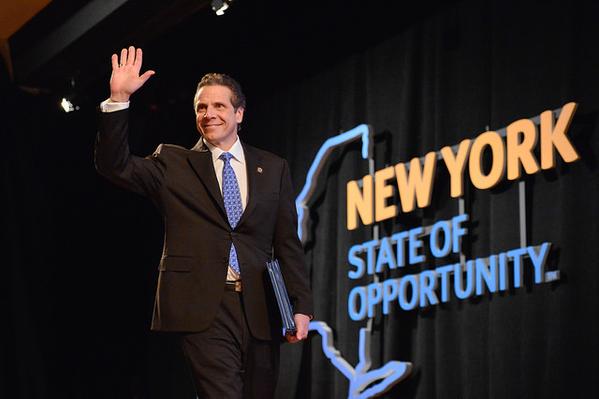 Gov. Andrew Cuomo's combined State of the State speech and budget presentation certainly couldn't have been mistaken for the "Tale of Two Cities" speech his father, Gov. Mario Cuomo, gave at the 1984 Democratic Convention. But, the son's Wednesday address at the Empire State Convention Center in Albany did contain a number of similar themes - themes that have been more recently employed by Cuomo's friend, New York City Mayor Bill de Blasio.

When speaking in loftier liberal lines and not, Cuomo gave de Blasio, who was in attendance, much food for thought as the mayor plans his 2015 state legislative agenda and readies to testify in Albany next week and deliver his own State of the City address soon after.

On Wednesday, the governor spoke to concerns shared by de Blasio, describing a public school system that fails the poor and people of color and a growing feeling that there is no longer any way to overcome poverty, that upward mobility is all but vanishing. "Too many believe if you're born poor, you'll die poor," he said. "That is the exact opposite of what The American Dream promised."

Even while invoking these tried and true progressive tomes, Cuomo continued to display his own traditional style wherein he mixes talk of fiscal austerity, balanced budgets, and backwards bureaucracy. In his presentation, Cuomo pleased de Blasio with talk of addressing inequality and measures to combat other issues facing New York City, such as the crisis over policing and what many call a biased criminal justice system. But, Cuomo left unmentioned some contentious issues of great importance to de Blasio and New York City residents, like the rent laws due to expire this spring.

In a move designed at least in some part to placate activists and de Blasio himself, Cuomo proposed a $10.50 minimum wage across the state and an $11.50 minimum wage for the city. "We believe if you work full time, you should be able to pay the rent and pay for food," Cuomo said like both de Blasio and President Obama. "We're not there yet."

Last May, in exchange for the endorsement of the Working Families Party (WFP), Cuomo agreed to a deal that would have raised the state's minimum wage to $10.10, indexed it to inflation, and allowed municipalities to increase it up to 30 percent over the state's wage. De Blasio brokered the deal - he had been lobbying to give municipalities control over their minimum wage. Many advocates insist the wage should be raised to $15.

In a video response to Cuomo's address, WFP head BIll Lipton called on Cuomo to enact a $15 minimum wage without the Legislature. "We call on the governor to follow San Francisco and Seattle's lead and pass a minimum wage people can live on: $15 an hour. If the Senate Republicans balk, Governor Cuomo can do it himself, taking executive action with a wage board."

Showing his usual comfort in the middle, Cuomo also walked a fine line while unveiling his response to outcry over the deaths of individuals at the hands of police and the recent killing of two NYPD officers.

In a 7-point agenda Cuomo said he would seek to allow district attorneys to release more information about a grand jury's findings when an indictment is not reached in a case where police are involved in the death of a civilian. The governor said he would appoint a monitor in cases when civilians are killed by police. The monitor could call for a special prosecutor. Cuomo also called for the creation of a commission on police and community relations; new recruitment initiatives aimed at diversifying police forces; and bulletproof glass in police cruisers, bulletproof vests, and use of police body cameras.

In a move de Blasio has praised, Cuomo is seeking to raise the age of criminality in New York. Currently, New York and North Carolina are the only states to try 16- and 17-year olds as adults. That would change as Cuomo took the recommendation of his panel on youth and the criminal justice system and proposed raising the age at which youth can be tried as adults to 18. "State prisons are no place for a 16-year old," Cuomo declared.

Glenn Lau-Kee, president of the New York State Bar Association, praised the proposal. "Raising the age of criminal responsibility will help all children to embark a more positive path to adulthood. Providing troubled teenagers with support and guidance can help them turn around their lives."

Many city lawmakers were waiting for Cuomo to utter the words "DREAM Act." The governor did so, promising to make a reality the legislation that would provide tuition assistance to undocumented students - but, he is tying it to the education tax credit that is favored by many conservative legislators.That proposal would allow for major tax write-offs for individuals who donate to private or charter schools. Both Sens. Adriano Espaillat and Ruben Diaz said they were overjoyed that the DREAM Act was in Cuomo's budget and were not concerned about the tax credit. Diaz said that he plans to vote for this Cuomo budget after years of voting against them.

Donna Lieberman, executive director of the New York Civil Liberties Union, issued a statement decrying the linking of the two items: "The governor's proposal to link the DREAM Act to a scheme that would divert precious resources away from public schools to private, parochial and charter schools is of serious concern. Education is the foundation for future success for both New York's children and the state's financial well-being. Transferring public money to private schools undermines both. It also violates the foundational principle that bars the government from endorsing religion."

De Blasio saw a small victory when Cuomo pointed to his use of mayoral control as a reason to renew it and expand it to other cities, but on other education points Cuomo ran directly up against him. Cuomo called for raising the charter school cap by 100 and doing away with regional restrictions (i.e. the New York City limit, which is close to being hit).

"This is something I've spoken to many times – I think the cap we have now is sufficient," de Blasio told reporters at a briefing after the governor's address. "I want to certainly work with charter schools in New York City, but as I've said many times, the key to improving education in New York City and throughout the state is to do a much better job at traditional public school education."

On charter schools and much else of the education platform Cuomo unveiled, de Blasio and his teachers union allies are likely to fight. The mayor has not expressed any interest in seeing teacher tenure reform like Cuomo is suggesting, nor does de Blasio want to see an increase in the amount that standardized test scores are counted toward teacher evaluations.

However, de Blasio did praise Cuomo for his commitment to funding pre-kindergarden. Cuomo proposed spending $25 million to provide pre-k to high-need 3-year-olds, noting that studies show children are bolstered by earlier education. De Blasio was also complimentary of this idea.

Cuomo repeated his support for a plan to build four Metro North stations in the Bronx and expand Metro North service to Penn Station. He also repeated calls from last year to modernize LaGuardia and JFK airports. He also wants to link LaGuardia and the subway through the 7 line and an air train.

Cuomo pledged $750 million in funding for the Metropolitan Transportation Authority's capital plan--down $20 million from last year. The MTA says it faces a $15 billion deficit for its 5-year capital plan. Cuomo himself has downplayed the MTA's actual need.

Other proposals that could impact the city include:

-Expanding the unemployment task force currently operating in the Bronx to the top 10 areas hardest hit by joblessness.

-Doubling funding for the state's jobs program for urban youth that provides millions in tax credits to businesses that hire disadvantaged youth.

The State of the State did have glaring omissions for some advocates. Cuomo failed any major mention of the Gender Non-Discrimination Act (GENDA) that affords protections to transgender individuals. The bill is included in the text version of Cuomo's prepared speech.

While Cuomo did discuss investing $486 million in building new affordable housing for "vulnerable" New Yorkers, he did not discuss renewing the expiring rent laws that keep housing affordable for thousands of city residents. Tenants and tenant advocates are highly concerned about losing affordable units to destabilization.

Asked by Gotham Gazette about the omission, de Blasio said there have been discussions at "a staff level." He added, "I think it's been one of the things that has preserved what affordability we do have in New York City – and we have an affordability crisis in New York City – it's a lot of what we talked about in the last year – it's a lot of why we have the most expansive affordable housing plan in the history of this country – to build or preserve 200,000 units of housing – because we have a profound affordability crisis in New York City. And you can't address income inequality without addressing the affordability of housing, which is the number one expense. So, I'm going to work to protect rent regulation. I'm going to look for ways that we can expand upon it and strengthen it. We've had a huge number of units lost from rent regulation or from other programs that protected affordability, and we have to address that – and I'm hopeful that we can get something done."

Everything in Albany is now in flux with news that powerful Assembly Speaker Sheldon Silver is facing arrest on charges related to his outside income as a lawyer. Silver has been de Blasio's most important ally in Albany in terms of negotiating with Cuomo and Republican Senate Leader Dean Skelos.

De Blasio is scheduled to return to Albany next week when he will address the legislature's joint budget hearing on municipalities. He promised he will have a more detailed analysis of all of Cuomo's proposals at that point. Traditionally, city mayors have come to Albany to ask for an increase in aid to municipalities, but that aid has been missing for New York City since Cuomo took office and his budget proposal calls for continued flatlining.

"I'll have more to say next week on details," de Blasio said at one point. "As I indicated at the beginning, I think there's some very positive elements in his agenda that I agree with, and I'm sure there'll be some other areas I have differences with..."