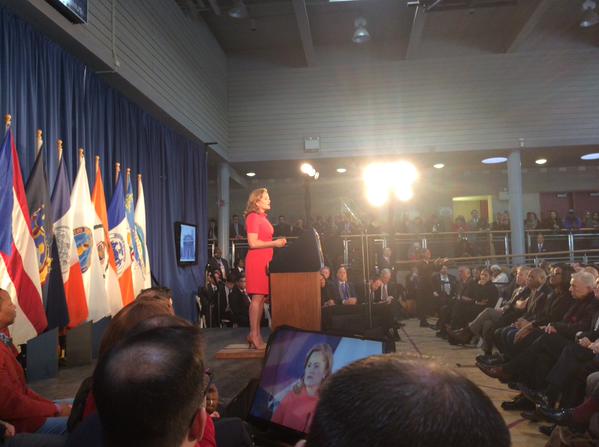 In lieu of a local college or the City Council Chambers, Mark-Viverito opted to hold the address at the Johnson Community Center, part of a public housing development and a place for which she helped secure funding. It was the first time a Council Speaker gave a State of the City address in a NYCHA property and the first time one was held outside of lower Manhattan.

Guests were greeted with doughnuts as they arrived and food trucks, typically vying for spots at the nearby La Marqueta food market, lined the streets.

The location and local fare were among several elements that played into Mark-Viverito's speech theme of "lifting every voice." The audience of several hundred was not just politicians and those looking to do business with the City. Many were NYCHA residents, local advocates, and others who live nearby, according to Council staff.

The speaker's speech, which lasted just over 50 minutes, consisted of policies and pronouncements aimed at bringing greater access and opportunity to the large numbers of New Yorkers struggling in what is, by many measures, a flourishing, wealthy city. Mark-Viverito made her focus clear right from the start of her speech, which was broadcast online in English, Spanish, and Chinese. Tweets from the Council Twitter account were also sent in all three languages.

Mayor Bill de Blasio's State of the City, delivered last week, dealt primarily with affordable housing, a major area of focus for the first-term mayor. Mark-Viverito's speech had a singular theme, but included a lengthy set of legislative and policy action items spread across a broad spectrum.

One of the central areas of focus for Mark-Viverito was criminal justice reform. Stop-and-frisk had an outsize presence in the 2013 elections, but with the numbers of stops having plummeted, attention has largely shifted to other areas of policing and public safety - and many are aiming to ensure large swaths of black and Latino youth don't continue to populate the city's jails.

Mark-Viverito said she wants to see the City expand the use of summonses and desk appearance tickets for minor, non-violent offenses instead of sending people to Rikers.

"We cannot continue to lock up those accused of low level, non-violent offenses without recognizing the dire, long-term consequences to them and to our City," Mark-Viverito said.

The change is not something she can do alone - though council legislation could move the needle. Mark-Viverito will need to work with the NYPD and the Mayor's Office of Criminal Justice. Police Commissioner Bill Bratton didn't offer his support for a change, saying it is something the NYPD already does.

"We already engage very comprehensively in [discretion]," Bratton said at an unrelated press conference Wednesday. He used the example of fare beaters, saying that discretion is up to the officer. Unless the offender is without identification, has a warrant, or has a weapon, officers are advised to not arrest.

"We can keep our streets safe, maintain order and preserve our quality-of-life without wasting precious resources and running hundreds of thousands of New Yorkers a year through the criminal justice system, and the Speaker has given us the blueprint for doing so," Council Member Rory Lancman, chair of the Committee on Courts and Legal Services said in a statement.

For those that do end up in the legal system, Mark-Viverito wants to ensure a way out. She noted that without bail, New Yorkers can spend up to 15 nights in jail even for minor offenses. Time away from work and the ability to pay bills can often lead to a cascade of problems, all of which could be fixed with $500 or $1,000 in bail money.

To that end, the speaker announced a proposal to create a citywide bail fund which would give those who qualify get-out-of-jail money. Details on eligibility and where the money would come from were not provided. If the program is to be City-funded, the City would basically be paying itself. Gotham Gazette asked the speaker's office for details, but none were provided by press time.

On the civil, as opposed to criminal, justice side, Mark-Viverito proposed creating an Office of Civil Justice, something she can do through legislation. The office would be charged with finding ways to provide free and low-cost civil legal service programs.

"Justice should not be reserved for only those who can afford it," Mark-Viverito said.

Details of the plan for this new office, such as cost and staffing, were not provided, but legislation could be introduced as soon as Thursday's City Council Stated Meeting.

Mark-Viverito also plans to reboot the Human Rights Commission, a little-known organization tasked with protecting the civil rights of New Yorkers by fighting discrimination and enforcing the Human Rights Law. The commission has suffered an 80 percent decrease in federal funding since the 90s. Mark-Viverito proposed a $5 million boost and doubling the attorneys on staff.

"Quite simply, we're going to put teeth in a Commission that has been ineffective for too long," Mark-Viverito said.

It is unclear if this money will be baked into this year's city budget proposal or if the Council will fund the initiative using its discretionary funding.

On the technology front, Mark-Viverito announced a new partnership with Microsoft, which will ensure all New York City public school students receive free Microsoft Office software licenses to be loaded on any device.The gift will also provide Office licenses for teachers and family members of students.

"Thanks to this nearly half billion dollar benefit, we will close the software gap and put our students on the pathway to success in the 21st century," Mark-Viverito said.

The speaker used her first State of the City address to again draw the issue of inequality into sharp focus - and she has made it no secret she plans to attack the problem head on.

"For too long, many voices in New York have been marginalized, drowned out or forgotten," Mark-Viverito said. "But just because some could not hear them, did not mean they were not there."