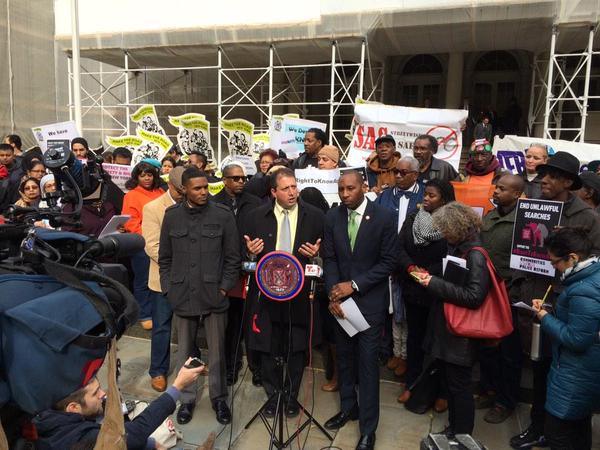 CM Lander and colleagues at a rally (photo: @NYCProgressives)

The City Council's independent bill drafting unit, created in the rules reform package that passed unanimously in May of 2014, is up and running and has in some cases sped up the legislative process, say Council members. Good government advocates, though, are skeptical about how significantly the process has changed, noting that the purpose of the unit is to help take the politics out of the legislative process.

"It's off to a great start," said Council Member Brad Lander, chair of the Council's Committee on Rules, Privileges and Elections, about the new unit. Lander was a primary sponsor on the rules reform package, which first went through his committee.

The independent bill drafting unit is led by former Fordham Law professor Annie Decker, who was hired by the Council's central staff under Speaker Melissa Mark-Viverito. Along with Fordham, Decker has taught at Cardozo Law School and Santa Clara University Law School. She has also served at the Santa Clara County Counsel's Office in San Jose, California.

Decker leads a team of four specifically dedicated to drafting legislation and since the unit's inception, they have been busy, often fielding requests on legislation that does not easily fit into the purview of one council committee or another. "There have been several thousands of drafting requests and this Council has been very active," said Lander. The actual number of drafting requests, however, is hard to obtain since the process is confidential under attorney-client privilege, according to Lander.

Lander said the unit has also been helpful in providing professional development for newly hired legislative directors of Council members.

But the creation of the drafting unit has not ushered in an overhaul of the legislative process. For the most part, drafting is still handled by the counsels representing different committees, which Lander said is sensible considering they have developed expertise in those specific areas over time. The new unit is crucial, however, for bills that aren't easily categorized. For instance, bills regulating unmanned aerial drones recently introduced by Council Members Dan Garodnick and Paul Vallone.

The independent unit is, in part, a political reform as well as procedural, included in the rules reforms aimed at democratizing the Council. According to Lander, in the former Council "a lot of drafting requests were backlogged. There was a perception in the prior council that it was sometimes political."

But it serves both purposes. "Having this unit has both improved and sped up the process of getting bills drafted. This was about enabling members to get their work done regardless of politics and ideology," said Lander.

Along with the unit, another reform related to the legislative process was an intra-council tracking system to provide more transparency and clarity to members. Council members now receive monthly update reports from an internal database on the progress of their drafting requests.

Good government advocates aren't entirely convinced yet by the unit, but are encouraged by the tracking system. "We definitely support the idea of members having a more independent say in how bills are drafted and introduced," said Lauren George, Associate Director, Common Cause New York. But a more important change, George said, would be ensuring bills are allowed to be introduced to the council floor. The fact that the central staff still handles how drafting requests are directed means "there could still be a significant delay based on political will," she said.

George conceded, though, that a system of monthly updates is much better for the members. "Council members used to really have to hound after the leadership to get their bills introduced."

Calling the unit a "building block" in improving the legislative process, George insisted that further improvements are necessary and that all legislation should be handled by the unit. "It shouldn't be hand picked. It would be better if it was across the board," she said.

Gene Russianoff, senior attorney at NYPIRG, agrees. "The tracking sounds like they're not treating council members like complete simpletons," he said while stressing that change would still be incremental. "There's a lot of good stuff in there. This sounds like it's improving upon the old process."

Russianoff cites the New York State Legislature as an example of how the City could reorganize legislative drafting. At the state level, a nonpartisan Legislative Bill Drafting Commission is charged with the entire drafting process.

"In Albany, you submit an idea and they write it up. Push comes to shove, they draft up the legislation. In the city, if a council member has an idea - good, bad or indifferent - he or she should be able to get it drafted," Russianoff said, although admitting that the Council's limited resources could not compare with those of the state Legislature. "I'd prefer that all bills be drafted by [the independent bill drafting unit] as a matter of course."

Citizens Union Director of Public Policy Rachael Fauss also believes the Council is on the right track. "The new transparency around bill drafting is an important fulfillment of the commitment made to members last year as new rules were adopted, and the new Legislative Bill Drafting Unit has the potential to be a body that can provide independent services to council members, similar to what is provided at the state level for legislators," she said. "We hope that it continues to move in this direction as it gets fully operational."

The consensus seems to be that, even in its infancy, the unit has been beneficial overall.

Council Member Ben Kallos has long been advocating for more efficient government, especially now as chair of the Committee on Governmental Operations. In the last few months, he said, the legislative process has sped up. "I think that we have a lot more legislation being introduced and a lot of legislation that's passing, and having the support of a drafting unit is really helping the Council adjust to a new pace of things where legislation and the legislative process and our city is really moving quickly so that it can be more progressive as soon as possible."

Kallos is on the same page as NYPIRG's Russianoff and Citizens Union's Fauss. "What's interesting is with everyone criticizing Albany, one of the things it does do right is it has a legislative bill drafting commission," Kallos said.

It is a City Council in transition, moving toward more transparent and efficient procedures. Kallos said he will continue to advocate for increased funding for the independent bill drafting unit until all bills can be drafted there. Till then, the existing committee counsels will continue to play a major role in the drafting process.

As Russianoff put it, though, "We've been trying to reform the rules for a quarter of a century, but Rome wasn't built in a day."