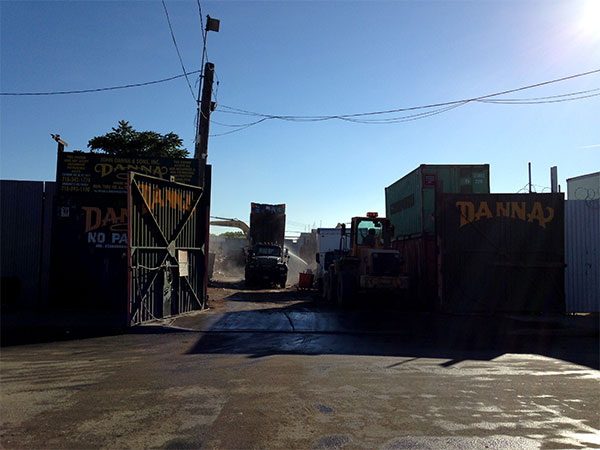 A waste transfer station in Hunts Point, the Bronx (all photos: Sarah Crean)

As the de Blasio administration strives to make greater social and economic equality its legacy, the neighborhoods that handle some of the city's most toxic materials are demanding a different sort of equity.

On February 13th, scores of South Bronx and North Brooklyn residents assembled at City Hall to hear discussion of a bill aimed at addressing the relentless movement of the city's waste through their neighborhoods.

The bill, which would cap the proportion of the city's waste processed in any one neighborhood, is the "first tangible, real attempt to address...the clustering and the overconcentration [of waste infrastructure] in a handful of environmentally overburdened communities of color," said Eddie Bautista, Executive Director of the New York City Environmental Justice Alliance.

Eighty percent of the city's waste handling capacity, the Council reports, is located in just three neighborhoods—the South Bronx, North Brooklyn and Southeast Queens. The proposed legislation would also cut the amount of waste processed by transfer stations in those three areas by almost 20 percent.

The severity of the overconcentration of trash processing in low income communities and communities of color is "not just," said Terry in an interview outside a waste facility in the South Bronx. Trucks rumbled by continuously as we spoke. "It flies in the face of all of our principles as a society, and especially of this current administration."

Almost one-third of New York City's trash is handled at waste transfer stations in the South Bronx, and then trucked or sent by rail to landfills across the region.

The relentless truck traffic, along with the presence of the waste transfer facilities themselves, has exacted a steep price from South Bronx residents.

Exposure to exhaust fumes is a known risk factor for asthma, the study notes.

The de Blasio administration does not support the proposed legislation, Intro 495. City Council Speaker Melissa Mark-Viverito, who represents sections of the South Bronx including Mott Haven, has not taken a position. The Speaker's colleague in the South Bronx, Maria Del Carmen Arroyo, is a sponsor of the bill.

Establishing a Limit on Waste
Every day, an average 21,000 tons of residential and commercial trash must pass through –and out of- New York City. Seventy percent of that daily trash volume is typically processed for long-distance shipment in just three neighborhoods: the South Bronx, North Brooklyn and Southeast Queens.

The Council hearing was led by Brooklyn Member and Sanitation Committee Chair Antonio Reynoso, who told the crowd that he had been born and raised on the south side of Williamsburg. The question of waste equity, he said, is the issue that is "most near and dear to my community."

Reynoso referred to "a tale of two cities," the phrase invoked by the Mayor to describe the inequities of life in contemporary New York City. "There's no better place to look at that than North Brooklyn, the South Bronx, and Southeast Queens when it comes to how we handle trash," Reynoso said.

Intro 495, which is sponsored by Council Member Reynoso and his colleague Steve Levin, also from North Brooklyn, seeks to do two things: first to cap, and then eventually reduce by 18 percent, the amount of waste that can be processed in the city's three most over-burdened neighborhoods.

The legislation will also limit the amount of waste that can be handled in any of New York's 51 community districts to five percent of the city's total permitted capacity. 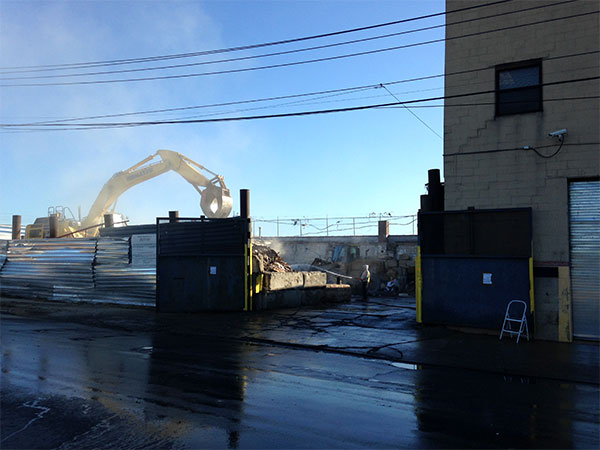 Concerns About Emergency Capacity
The legislation proposed by Council Members Reynoso and Levin does not have the support of the de Blasio administration.

Kathryn Garcia, Commissioner of the city's Department of Sanitation, told the City Council in testimony at last Friday's hearing that the neighborhood waste processing limits mandated by Council Member Reynoso's legislation could create dangerous logistical challenges for the City, especially during extreme weather and other emergency situations.

But, Commissioner Garcia said, the administration was prepared to immediately start negotiations with the city's 39 privately-run waste transfer stations regarding "voluntary reductions."

Note: this article has been corrected to reflect that the proposed legislation would cut the amount of waste processed by transfer stations in the three focused on areas by almost 20 percent; not cut capacity as was previously stated.