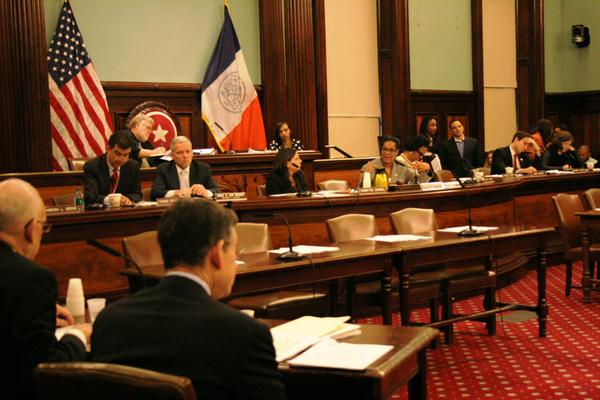 NEW YORK—Mayor Bill de Blasio calls his budget fiscally responsible, progressive, and honest. But is it transparent? According to members of the City Council, it needs some improvement in that regard.

On Wednesday, the Council held its first in a series of hearings on the mayor's fiscal year 2016 preliminary budget. Gone were the muffins and soft lines of questioning from the initial council budget hearing last year, the first budget cycle for the new mayor and largely revamped council. Instead, Council Member Julissa Ferreras, chair of the Finance Committee, and her colleagues came armed with pointed questions, particularly related to transparency.

Ferreras cited the continued use of broad units of appropriations, lack of detail about key proposals, such as the City's housing plan, the council receiving delayed access to information, such as the Education Five Year Capital Plan, and the lack of clarity around how the administration will find savings without the use of mandated cuts across agencies.

"The lack of transparency in the budget and the administration's failure to timely provide budgetary information to the Council impedes the Council's ability to make informed decisions about the City's current fiscal condition, properly assess past and current proposals, and adequately make long-term planning decisions," Ferreras said at the budget hearing on Wednesday.

In its budget response last April, the Council demanded large units of appropriation, particularly around education funding, be broken up into specifics to better track spending and progress on initiatives.

"We are greatly concerned with the lack of transparency in units of appropriation in the Executive Budget," the April 2014 response reads. "Dividing funding for Universal Pre-Kindergarten, Elementary and Middle Schools and High Schools into smaller units of appropriation would increase accountability and transparency in a massive budget, making it easier to track categories of spending and ensure that all school funding is scheduled in the appropriate budget code."

Council members were hoping to curb the transparency issues that had plagued the Bloomberg administration, where including overly broad units of appropriation was common place. The Council asked the de Blasio administration to expand units of appropriations (U of A) in six areas. As of the preliminary budget, the de Blasio administration has complied with three of the six: renaming the U of A in the Miscellaneous Budget to "Reserve for Collective Bargaining," moving networks and clusters from the Schools to Regional Administration, and moving charter support costs to the Charter U of A.

Ferreras asked de Blasio's Budget Director, Dean Fuleihan, what is causing the delay, to which he responded that the City is committed to releasing the fourth detailed U of A by the executive budget, due in April.

"That's still not six. And that is still in fiscal year 16, as opposed to fiscal year 15 as we had discussed," Ferreras fired back, exemplary of a somewhat surprisingly tense session, even as the Council is largely supportive of the mayor's policy and budget plans.

Ferreras added the expanded U of A for universal pre-K, a $340 million state-funded program, was very important to the Council.

"We made a commitment and we will make sure that we keep that," Fuleihan said.

Ferreras noted that the Council is expected to make more requests related to U of A, and Fuleihan said that his team would work to make it happen.

PEGs
When de Blasio released his first budget in early 2014, he did away with Programs to Eliminate the Gap (PEG), which had become infamous during the Bloomberg years, when the mayor required agencies to identify ways to cut spending. The Council would expend enormous energy to restore proposed PEG cuts to things like firehouses and libraries, cuts which rarely made it into the executive budget.

"We want to make sure when we are here in FY17, we can follow whether the efficiency failed or not," Ferreras said.

Fuleihan noted the administration will be presenting that information soon and is open to discussing the format in which the Council would like to receive it. When presenting his preliminary budget, de Blasio told reporters that the cost savings identified by agency commissioners would be made clear in the April executive budget.

But this year, the first in which a 10-year capital plan is due for the de Blasio administration, the plan was not as detailed as it has been in the past, at least according to Ferreras, whose opinion was challenged by Fuleihan. He argued the administration included major agency zeroes and significant reductions in the Department of Education for the second five-year period, something not done in the prior administration.

"I would argue what we presented you was much more detailed," Fuleihan said. "We are happy to work with you and discuss the merit, but we believe this was a more realistic plan than the last 10-year capital plan that was presented."

Fuleihan noted it was a preliminary plan and several items would be affecting it that had not come down the pike yet, including the new PLaNYC, which is due in April, as well as state education funding, also due in April, and federal funding for the Highway Trust Fund, which is set to expire in May.

"They would like more transparency," Fuleihan said following the hearing. "We agreed to additional provisions last year in the adopted budget and we will continue to work with them. There is no reason not to work with them."