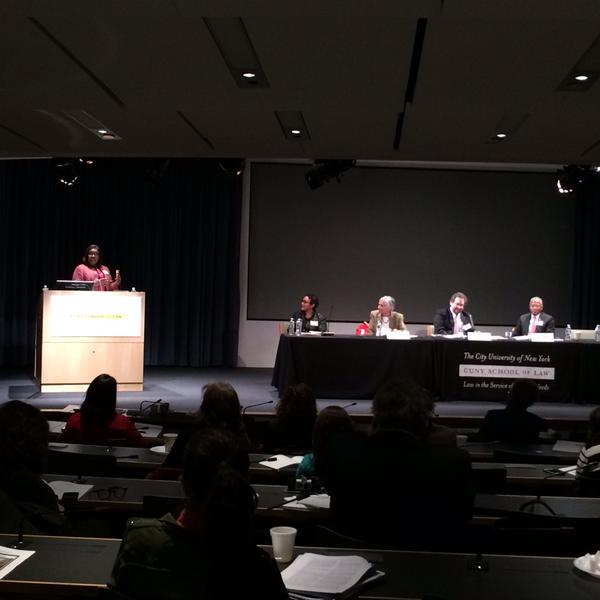 With a Wednesday evening event in Manhattan, Public Advocate Letitia James concluded her five-borough "Our School, Our Voices" series of community forums on the future of mayoral control of the city's schools.

Speaking before a gathering of around 60 people at John Jay College of Criminal Justice, James raised the issue of increasing local control over school governance through more community engagement and parental involvement. "Mayoral control has functioned as a business model," James said, largely referring to its implementation under former Mayor Michael Bloomberg, who won the right to control the city's system through state law in 2002.

Mayoral control over the city's schools was established to address a chaotic and corrupt school governance system. It was extended by the State in 2009 and is set to expire in June of this year. State legislators will soon decide on extending the system, perhaps as part of ongoing budget negotiations that are set to conclude by April 1. Education policy is proving, as usual, to be among the most contentious areas of debate.

Mayor Bill de Blasio went to Albany in late February and asked lawmakers to make mayoral control permanent. Governor Andrew Cuomo has proposed a three-year renewal, while the Democratically-controlled State Assembly has put forth a seven-year extension. The Republican-controlled State Senate has not taken a definitive position, but Sen. Jon Flanagan, who heads the Senate education committee, has said he's still waiting to see if Mayor de Blasio deserves to keep the power. There is mounting pressure on de Blasio to show that he can turn around the city's most struggling schools.

"In all likelihood, based upon my experience working with the New York State Legislature, it looks like mayoral control will continue. The question is, in what form," James told Gotham Gazette after Wednesday's forum. She believes that extending the degree of local control is still possible. "I believe that, yes, we could somehow expand the opportunities for parental engagement, parental involvement, and sharing governance on the Panel for Education Policy as well as strengthening Community Education Councils beyond just advisory."

Wednesday's forum, like the others James has hosted, included a panel, along with other guest speakers, and audience input. Manhattan Borough President Gale Brewer and City Council Member Helen Rosenthal addressed the forum on issues of technology in education and increased transparency of Department of Education data, respectively.

While differing on the extent to which Mayor de Blasio - or any Mayor - should have power over city schools, panelists agreed on the central tenet that education should be removed from the sphere of politics as much as possible. Some even advocated for what seems to be the impossible task of ending mayoral control.

Sam Anderson, member of the Independent Commission on Public Education (iCOPE), which sees education through a human rights lens, said, "Mayoral control by definition is dictatorial." Its structure, he said, does not allow for the involvement of parents, students, and educators in the decision-making process, and that it should be done away with.

Most panel members, however, seemed to understand that mayoral control is a reality, however harsh it appears to some. Teresa Arboleda, a public advocate appointee to the Citywide Council on English Language Learners said, "I would love to see mayoral control go, but considering all the obstacles, we have to be real." She insisted that it be separated from the budget debate and that a big step in diluting the Mayor's power would be in establishing fixed terms for the PEP members. Currently, the Mayor appoints 8 of the 13 members, with the rest being chosen by the Borough Presidents.

Anne Looser, a high school special education teacher and a member of Teachers Unite, focused on the strengthening of School Leadership Teams as a means of "local control and site-based governance." Noah Gotbaum, a parent member of a Community Education Council, said if mayoral control does continue, it should be along the governor's proposal of three more years while the City explores alternatives.

James explained that in her belief and from what she hears from New Yorkers, people need to have a say and be heard at the community, neighborhood, and school levels. "We must demand that the infrastructure now in place under mayoral control is supported and respected," she said. "The School Leadership Team, Community Education Council, the PTA, and all the educational councils, which I have appointees on, must have an important role helping shape educational policy and priorities in their district and maximizing opportunities for community input."

Calls for attention to this issue may be heard at the state level, though it is unclear how much even Mayor de Blasio is listening. James capped her campaign with a Friday policy breakfast at CUNY Law School with renowned education policy expert Diane Ravitch as keynote speaker. (On Sunday afternoon, James will host an "Our Schools, Our Voices" rally at City Hall park, calling on the State to meet its funding obligations based on the Campaign for Fiscal Equity ruling.)

Then, on March 28, according to Gotbaum, students, teachers, and parents will come together in Manhattan to "fight Governor Cuomo's destructive agenda" by rallying outside the governor's office.

James is optimistic about the momentum the movement is gathering. "I think [these forums] are very effective because I really believe that there's power in people," she said.

"Our hope really rests in the Assembly and I hope the Assembly members are listening to basically the calls of their constituents," she added. "They're petitioning their government. They want change. They believe that concentrated power just does not work and [it's] in the interests of not only the students but the parents, and in furtherance of government - or I should say, in furtherance of democracy."