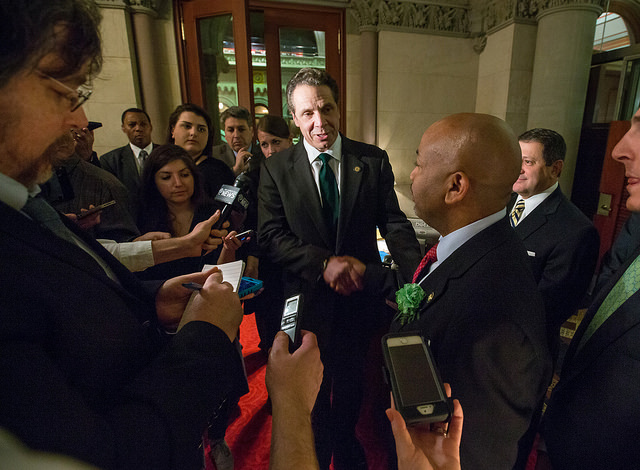 On Tuesday Gov. Andrew Cuomo told reporters that the DREAM Act and the Education Investment Tax Credit (EITC) he had paired were no longer part of budget negotiations. For many Black and Latino legislators the news was painful - they had pushed Cuomo to include the DREAM Act as part of his budget after he and Lt. Gov. Kathy Hochul campaigned on the issue across the city this summer. But there was also a sinking sense of deja vu.

"DREAM Act, ETC are very important. Two different reasons, two different constituencies, but both get to the same point, which is access to education," Cuomo told reporters during a visit to the state Senate chambers Tuesday. "We have no agreement. We are nowhere close to an agreement."

A number of city-based legislators, especially from the Senate, say they have been repeatedly burned by a governor who is willing to talk about their issues on the stump to earn votes from their constituents but not willing to actually expend political capital to move their issues when the opportunity presents itself. They are increasingly concerned that Cuomo is willing to cede any number of policy points in budget talks, including further raising the minimum wage, in an effort to win the support of Senate Republicans on other issues.

Sen. Jose Peralta, who has worn a "Pass the DREAM Act!" t-shirt under his jacket during session, has been very active in supporting the act as part of the budget. The $27 million program Cuomo had included would provide tuition assistance to undocumented immigrants. Peralta said he was let down by Cuomo's decision to drop the bill and will work with advocates to push Cuomo and Republican Senate Majority Leader Dean Skelos on the issue. The DREAM Act has more than enough support in the overwhelmingly Democratic Assembly.

Senate Republicans believe their opposition to the DREAM Act actually bolstered them in a number of races across the state this past fall.

In a new op-ed on Thursday, Cuomo explains that he wants to see votes on both the DREAM Act and EITC, and that while they may not be in the budget deal, he will continue to push each of them in the legislative session to follow, which lasts into mid June.

However, legislators are frustrated more generally. What is particularly irksome to Democrats this year is that Cuomo appears to be jettisoning contentious issues to get an on-time budget when he claimed earlier in the year that he would sacrifice budget timeliness for ethics reform (which the governor and Assembly Democrats have come to an agreement on).

"The governor should be equally committed to items in appropriations as he is on ethics," said Sen. Martin Dilan. "If DREAM comes out it should all come out. The budget is where we have leverage. Outside of the budget [The DREAM Act] is dead. This was a campaign promise of the governor, and I believe he and the lieutenant governor ran very hard on it."

Sen. Kevin Parker said he still has hope for the DREAM Act despite what Cuomo might have said. "There is still time for anything to happen," he said of ongoing budget negotiations. The budget is due by Wednesday, April 1.

Another item Democratic legislators point out Cuomo ran on was women's equality. And while Cuomo was supposed to help elect a Democratic Senate, he appeared to put little effort into doing so. Now the two converge as a Republican Senate blocks several key pieces of Democratic legislation, such as the DREAM Act and the abortion plank of the Women's Equality Act, and Senate Minority Leader Andrea Stewart-Cousins, a woman, is left out of budget negotiations.

Meanwhile, Cuomo has allowed his ally Jeff Klein, who heads the five-member Independent Democratic Conference, to join in leadership meetings around the budget. Mainline Democrats have cried foul over Klein being included and not Stewart-Cousins. At the first meeting of the budget conference committees, nicknamed "the mothership," Stewart-Cousins used her brief opportunity to speak to protest her exclusion. "Apparently the mothership is the only place this mother will appear negotiating the budget," she said.

Democrats appear to now have most of their eggs in the debate over increasing the minimum wage but a number of them fear Cuomo has already caved to Senate Republicans on the issue - something Skelos said was the case on Thursday, declaring an increase out of budget negotiations.

"This guy should be with us on $15," said one legislator who requested to remain anonymous of Cuomo, "but instead we have to beg and scrape to get him to push for $11.50 [for New York City]."

Assembly Member Brian Kavanagh called the minimum wage increase "the Assembly's top priority" when speaking with Gotham Gazette, but added that negotiations were centered around Cuomo's proposal for an eventual $10.50 for the state and $11.50 for the city. Parker said that the minimum wage needed to be done in this budget. "We don't want this to be another thing that comes up each year."

There has been underlying concern among Democrats that Cuomo would dump minimum wage in an effort to appease Skelos, who appears to back him on a number of education and financial issues. Skelos has pushed to remove a number of issues from budget discussions including how to use the State's massive bank settlement windfall and the renewal of mayoral control of schools. "I would guess that the independent monitor [for grand juries] is not going to be there," Skelos said after meeting with Cuomo on Tuesday. "Raising the age is not going to be there. DREAM Act is not going to be there. Other than that things are up for negotiation," he said, seemingly taking a victory lap for having nixed these items, which he and his conference oppose, from the budget.

Assembly Speaker Carl Heastie told reporters on Wednesday that a minimum wage increase is his top priority. "It absolutely has to be on the table as far as we're concerned in this conference," Heastie said.

During last year's Black, Puerto Rican, Hispanic and Asian Caucus Weekend, Cuomo, joined by Mayor Bill de Blasio, made a grand announcement that he would support a program to provide prison inmates with access to college degrees. A great majority of the lawmakers there would rather have heard Cuomo pledge to deliver the DREAM Act, but they praised and supported his plan. However, Republicans mocked and derided the idea as a waste of taxpayer money that rewarded criminals and Cuomo quietly let the initiative die.

It appears the governor may be having a similar moment this year - except that the program at stake faces criticism from both Democrats and Republicans. Cuomo's "Raise the Age" initiative that would raise the age youths can be tried as adults to 18 from 16 was initially greeted warmly by Democratic legislators. But after analyzing the complex program, which is spread out in different sections of the budget, a majority of Democrats now think Cuomo's proposal is deeply flawed. The Assembly presented a reworked version in their budget and Senate Democrats, led by Sen. Velmanette Montgomery, wrote to Cuomo on Tuesday saying they favor the Assembly version because they believe some of the provisions in Cuomo's plan will actually lead to juvenile offenders spending more time in jail.

"Raise the Age is not likely to be done in the budget," Cuomo told reporters outside of the Senate Republican conference room on Tuesday. "It's very complex. It connects with other issues..."

Melissa DeRosa, Cuomo's spokesperson, quickly contradicted her boss, on Twitter and in a statement, saying, "Raise the age is still part of budget negotiations; we believe we will successfully secure the necessary funding to implement the program."

It appears, though, that the policy will be decided outside of the budget while funding to implement it will be included in anticipation of legislation.

Cuomo defended his decision to remove issues from the negotiating table after he met with Senate Republicans on Tuesday: "The budget is my statement of saying, these are the priority issues, right? And now, people will say, 'If he didn't put it in the budget, he doesn't really care about it. That's what's happened over the years, and if it's not in the budget, then he doesn't mean it.' So the budget has become expansive from that point of view."