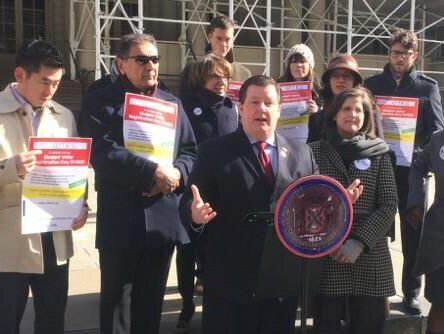 On Thursday, Mayor Bill de Blasio is set to unveil his Fiscal Year 2016 Executive Budget, which is likely to be nearly identical to the final budget passed by the mayor and the City Council before the June 30 deadline. Much of the new version of the mayor's spending plan will be similar to his $77 billion preliminary budget, which he presented in February and was vetted throughout March by the Council. But, the de Blasio administration has already acknowledged several areas where funding levels will show a difference on Thursday, with increases planned to support manufacturing, mental health services, the MTA, struggling schools, and more.

One under-the-radar aspect of the budget that is set to see a significant change from preliminary to executive is funding for the city's Board of Elections, which administers New Yorkers' opportunities to vote.

The preliminary budget includes approximately $84.4 million for the Board of Elections (BOE), a drop from the $113.9 million that the BOE is spending in fiscal year 2015, which wraps up at the end of June. It's a differential of about $29.6 million, a 26 percent decrease.

This disparity, however, is unlikely to stick. According to the Independent Budget Office (IBO), this year's preliminary budget allocation for the Board of Elections follows a pattern of the last several years. In fact, fiscal 2016 includes a larger preliminary provision for the BOE than preliminary budgets of previous years. Doug Turetsky, IBO Chief of Staff and communications director, told Gotham Gazette that this is not something that should raise eyebrows just yet; the trend is that the actual budget will make up the $30-40 million gap from the preliminary plan. If funding stays the same, there might be reason for concern that BOE is being underfunded. But it is also important to keep in mind that each year brings different elections, whether they be on the city, state, or federal level.

It may appear a curious annual underfunding in the preliminary, just to be increased in the executive or the adopted budget, but Turetsky said that there is often talk of moving federal primary elections from June to September to coincide with state and city primaries, which would foster efficiency and decrease budgetary need. If the figure in the preliminary was closer to what will likely be in the actual budget, Turetsky explained that it may act as a "disincentive" for the state to move state and federal primary elections to the same date. By holding off on the additional funding, it puts pressure on the state to decide and, ideally, move toward a single voting date.

Council Member Ben Kallos, chair of the City Council Governmental Operations Committee, spoke similarly, but did express concern about the general issue of underfunding BOE operations. Kallos told Gotham Gazette that while the BOE tends to overestimate its financial need, if it is not appropriately funded "it is the elections and democratic process that suffers." While Kallos is looking for stronger numbers in the executive budget, he also said that "if we over-budget then that means that another agency loses."

BOE Executive Director Michael Ryan is not worried about the dramatic trend that some might say resembles the "budget dance" affecting his agency's operations in the coming year. Ryan told Gotham Gazette that the BOE still needs an estimated $12 million; approximately $2.2 million to update the expiring warranty for electronic voting and the other $10 million to meet federal mandates for ADA accessibility. Ryan expressed confidence that his agency will be appropriately funded.

The "lean and mean preliminary" as he called it, is just part of the process. The real focus is on the executive budget, he said, with little concern over the difference between the two proposals. He also put his agency into larger budgetary context. "The executive budget should be a balancing between what the mayor's office ultimately believes an agency needs to function and what the city expects to receive in tax revenue, because the city must operate on a balanced budget," said Ryan.

Ryan told Gotham Gazette that the trend has continued because it works for budget planning purposes. By underestimating in the preliminary budget, the mayor's office establishes a baseline (or placeholder as it has been called) that can be edited henceforth, after the hearings, negotiations, and decisions that follow - including decisions made on the state or federal level. "It's a check and balance, to make sure that not just the Board of Elections, but that all the agencies that are asking for funds that they actually need," Ryan said.

Ryan also said that another reason the city keeps careful tabs on the allocation of funds is a result of the budget crisis of 1975, when the city went bankrupt, spending into debt of an estimated $14 billion. Shortly after the crisis, a law passed requiring balanced budgets, removing leeway for the city to operate on deficit spending.

"I'm not anticipating any issues, quite frankly," said Ryan. "I think it's all gonna work out fine and we've been working very closely with the mayor's office to make sure that our needs are met and that we're able to fulfill our statutory and constitutional mandate to provide elections for the voters of the City of New York."