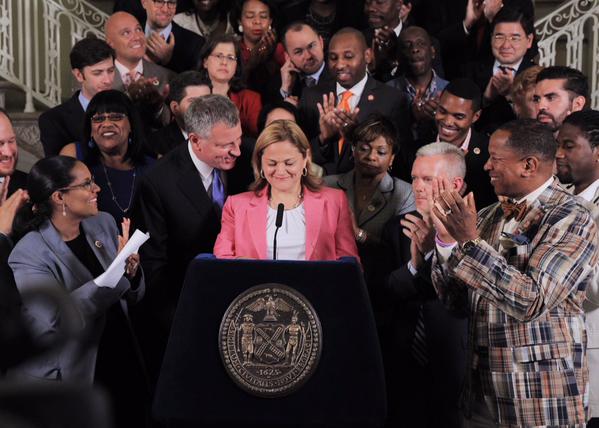 A little after 10 p.m. Monday night and more than a week before deadline, Mayor Bill de Blasio and City Council Speaker Melissa Mark-Viverito announced that they had reached a deal on a balanced fiscal year 2016 city budget. The $78.5 billion budget is for the fiscal year beginning July 1 and includes additional spending from the mayor's Executive Budget, released in May, for several Council priorities - including the hiring of 1,297 new NYPD officers. Along with the expanded NYPD headcount, the budget includes funding for six-day library service around the city, parks workers, senior citizen services, a city bail fund, and other key items that were negotiated over the past months. The budget also reflects new agency savings and increased tax revenue, thus showing only a $200 million increase from the mayor's executive budget.

De Blasio gave credit to his budget team, led by Office of Management and Budget Director Dean Feulihan, and Mark-Viverito to hers, led by Finance Committee Chair Julissa Ferreras-Copeland, who was the third speaker Monday evening after de Blasio and Mark-Viverito. The mayor and speaker gave what each sees as the highlights from their perspective, as did Ferreras-Copeland, then the press assembled in the rotunda at City Hall peppered the mayor with questions about why he had relented to the Council push - two years in the making - to add significantly to the NYPD force. Explaining that the two sides had agreed to key cost savings like a cap on NYPD overtime, de Blasio also indicated that he and council leadership believe the added personpower will allow NYPD Commissioner Bill Bratton to implement true neighborhood policing. There will also be new officers devoted "to counter-terror work."

In a release to the media, de Blasio's office touts the budget as moving forward "key initiatives to tackle income inequality and lift up families across the five boroughs, while protecting and strengthening the City's long-term fiscal health."

When he spoke, de Blasio named three standout aspects to him: increased funding toward the city's most struggling, or "renewal", schools specifically for extended learning time and health services; additional funding for libraries that will return them to six-day service; and the plan for an expanded NYPD headcount. In the statement released by his office, he said, "We're strengthening the NYPD's ranks, devoting new officers to counter-terror work and neighborhood policing, while securing vital fiscal reforms in overtime and civilianization. We are also making critical investments in our renewal schools, libraries, and so much more."

For her part, Mark-Viverito highlighted the investment in seniors, which, according to the mayor's office, includes "$4.3 million to eliminate waitlists for the Department for the Aging's homecare program, and $2 million to expand elder abuse prevention," as well as "$750,000 – growing in the out years – to fund support services through the Seniors in Affordable Rental Apartments (SARA) Program; 30 percent of those units are set aside for homeless seniors." Referring to strong ongoing lobbying efforts by seniors and their Council member allies (chiefly led by Council Members Margaret Chin and Paul Vallone), Mark-Viverito acknowledged the "active," "vocal," and fast-growing population of aging New Yorkers.

In a statement, Mark-Viverito also highlighted new Council spending, saying, "From establishing a Citywide bail fund, to creating new jobs for young adults, to strengthening the City's commitment to veterans and hiring 1,297 more NYPD officers to keep us safe, our budget makes New York City a better place to call home." The Council is dedicating $1.4 million to create a new bail fund, part of "$280 million in Council initiatives that will support New Yorkers throughout the City."

The goal of the bail fund is "to keep those accused of non-violent, low-level offenses out of jail. The Council's Bail Fund will provide bail of up to $2,000 and will save the City millions of dollars in incarceration costs and will help make the City's criminal justice system more just," according to a Council press release.

The budget includes additional funding toward parks that had been lobbied for by Council members and advocates, including almost $700,000 to extend beach season one week past Labor Day.

The deal received a mostly positive response from Council Parks Committee Chair Mark Levine, who said in a statement, "I am thrilled that the City Council has restored funding for gardeners and maintenance workers--saving 150 vitally needed jobs, and protecting a critical resource for parks in low- and moderate-income neighborhoods. I am also excited that we will be extending the beach season, allowing countless New Yorkers to enjoy these resources for a week past Labor Day," said Council Member Mark Levine. "I am disappointed the budget does not provide additional funds for community gardens, playground staff, mid-sized parks, and other important needs our park system faces. I look forward to continuing to work with the Mayor and my colleagues in the Council to bring greater resources to a park system that has been underfunded for far too long."

While de Blasio noted the increased funding heading toward the renewal schools that are the focus of much Department of Education effort and outside scrutiny, there are other key school-related additions to the budget, including $6.6 million for the DOE to "hire 50 additional physical education teachers and conduct a comprehensive needs assessment to address barriers and move schools toward full physical education compliance." There was a City Council hearing last week focused on the city's continued violation of state physical education requirements. This move in the budget may slow Council attempts to enact legislation requiring more reporting by the DOE on physical education programming, staffing, and space.

There's also "$17.9 million to phase-in breakfast in the classroom at 530 elementary schools, serving 339,000 students" by fiscal year 2018. While money for this Council priority, otherwise known as "breakfast after the bell," is included, there is no expansion of universal free lunch, which the Council had been pushing for. Last year, the program was instituted in middle schools, where all students are now provided lunch at no charge, but the mayor said that the results of the program were underwhelming and that instead of expanding it to elementary and/or high schools, the city would first look to do more outreach around the middle school offering and see if there is a noted improvement in year two.

The budget includes "$1.14 million to fund 80 additional school crossing guards," which will help contribute to the mayor's Vision Zero traffic and pedestrian safety work around schools, and more money for teachers to spend on their classrooms. On Twitter, the United Federation of Teachers thanked Mark-Viverito specifically, noting that "The city budget contains a 62% increase in Teacher's Choice funds. Teachers should get $125 next school year, up from $77."

One point of contention, especially heightened of late, has been funding and function at the Mayor's Office of Veteran Affairs. There has been a push to pass a Council bill that would create a new Department of Veterans Affairs, moving the work outside of the mayor's office (though still under the mayor's control) and allowing for increased funding and Council oversight. That bill is likely stalled in the Council, though it has over thirty sponsors, while the new budget includes "$1.5 million in new staff and resources to meet the Mayor's goal of ending veteran homelessness, and $335,000 to fund a team of Veterans Service Officers that will be deployed in communities throughout the five boroughs," according to the mayor's office.

Meanwhile, the NYPD investment for nearly 1,300 new officers is much of what everyone is talking about. The mayor had pushed back against Council pleas (and even a few from Bratton) for hiring 1,000 new officers during both the fiscal 2015 and 2016 budget processes. This budget, however, includes "$170 million to add new uniformed officers to the NYPD, coupled with vital reforms in overtime and civilianization that will generate over $70 million in savings when fully phased-in. The new officers will be dedicated to counter-terror efforts and neighborhood policing – central to Commissioner Bratton's reengineering of the Department to bring police and community closer together while keeping crime low," according to the mayor's office.

Police reform advocates expressed immediate displeasure with the compromise and budget watchdogs shared concern about the choice's fiscal ramifications. The Police Reform Organizing Project, or PROP, released a statement saying, in part, "Mayor Bill de Blasio and City Council leaders have made a truly terrible decision to add 1300 or so new officers to the NYPD's headcount. Rather than solve problems it will aggravate existing difficulties, deepening the racial, social, and economic inequities that plague our city and adding to the antagonism and distrust that communities of color already feel toward the police and the criminal justice system." De Blasio and others, of course, argue differently, saying that more officers will allow the NYPD to develop stronger community relationships and do more preventative policing.

Meanwhile, the Citizens Budget Commission said in a statement, "The FY 16 adopted budget announced by the Mayor and the Council this evening adds approximately $200 million in spending for additional police, social service providers and other programs. Although there is additional revenue available to fund these costs in the coming fiscal year, the agreed upon additions are an added risk to the City's fiscal health in future years, when budget gaps are already projected and when an inevitable economic downturn will erode the revenue required to pay for recurring expenses."