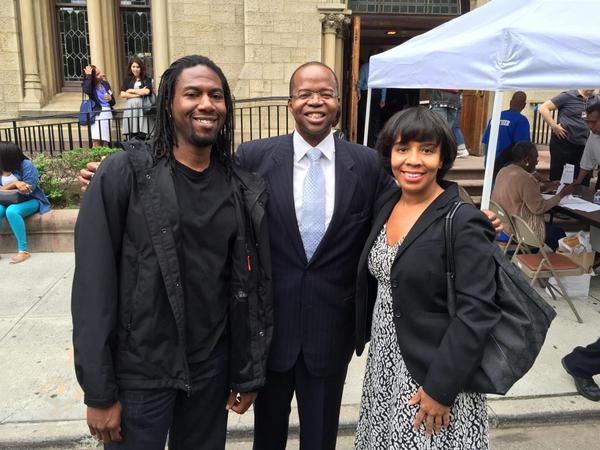 During Father's Day weekend, hundreds of individuals received the gift of a new beginning. The Brooklyn District Attorney's office held a 'Begin Again' event to lift open arrest warrants related to summonses for low-level offenses ranging from public intoxication, the most common violation, to being in a park after closing. In total, 1,039 individuals from across all five boroughs attended the two-day event and 670 warrants were cleared.

The 'Begin Again' initiative is part of a larger summons reform movement that aims to make it easier for individuals to respond to summonses and ultimately, avoid arrest warrants. While the total number of summons filings in New York City has decreased significantly in recent years, the system remains strained, with a citywide backlog of over a million summonses.

In Brooklyn, District Attorney Ken Thompson's office indicated that the success of the event would lead to another in September, and that while similar events were held under former District Attorney Charles Hynes, the Father's Day weekend initiative saw the greatest number of warrants cleared in Brooklyn during comparable time periods. Other district attorneys do not appear quick to follow suit.

"District Attorney Ken Thompson's Begin Again initiative is a forward-thinking approach that tackles this issue head on," Mark-Viverito said, "enabling individuals to resolve their warrants and move on with a clean slate without the threat of impending arrest."

Thompson's office is quick to stress that warrants and the summonses that led to them were not simply dismissed wholesale, but that each individual who wanted to 'Begin Again' was given a fair hearing, with most warrants adjudicated and summonses cleared - as is the case when people show up to their summons-dictated court appearance.

While the initiative has received widespread support, some expressed reservations. "It does create a moral hazard that sends the message that people can expect such amnesties in the future," said Heather Mac Donald of The Manhattan Institute, a right-leaning think tank. "It's a real issue and it has to be weighed against the public good in clearing these backlogs of warrants."

By using the term "amnesty," Mac Donald gets at a key issue for critics, who say that people should follow the law in the first place and pay the consequences for breaking it and for missing any mandated court appearance. People, including NYPD Commissioner Bratton, are hesitant to give the appearance of amnesty, believing that if New Yorkers believe there are no consequences to their actions, law-breaking will likely increase.

But Dawn Ryan, attorney-in-charge of The Legal Aid Society's Brooklyn criminal office, notes a distinction between the clearance of warrants and actual amnesty. "To me, amnesty is telling those who received the summonses that they may throw them away and forget they ever received them," said Ryan. By contrast, at 'Begin Again,' "they're still being held accountable in terms of showing up in response to the summons and having this matter resolved before a judge."

At 'Begin Again' events, those with outstanding warrants are assigned a Legal Aid attorney and brought before a judge, who hears the reason for the original summons and for not appearing in court, thus earning the warrant.

The Brooklyn District Attorney's office hailed 'Begin Again' a success and Ryan stated the event attracted so many people on its second day that the line remained open for an additional 45 minutes beyond the scheduled time. But the 670 warrants cleared barely make a dent in the 1.2 million open warrants related to unanswered summonses throughout New York City.

"It's just a drop in the bucket," acknowledged City Council Member Rory Lancman, who chairs the Council's courts and legal services committee. An estimated one in seven New Yorkers have an outstanding summons warrant and with less than one tenth of one percent of open summons warrants resolved thus far through the 'Begin Again' initiative, the need for further reform measures becomes evident. "I thought it seemed to be a great success for what it was," said Lancman. "But in the scheme of things, it's not really a sustainable strategy for getting at the over one million warrants that are outstanding."

The staggering number of open summons warrants is one of the reasons why Lancman, Council Speaker Mark-Viverito, and New York State Chief Judge Jonathan Lippman are among those advocating for certain low-level criminal offenses to be reclassified as civil penalties. A reclassification of some offenses would lessen the burden on the summons court system while also granting a reprieve to individuals who have committed non-violent, so-called 'quality-of-life' infractions. Proponents of such measures have argued that summonses are disproportionately issued to poor people of color and that arrest warrants resulting from failure to respond to a summons can have grave repercussions that far outweigh the original offense.

But even certain summons reform measures, it would seem, are backlogged. Earlier this year, Mayor Bill de Blasio announced "Justice Reboot," an initiative including a planned overhaul of the summons process. Among the proposed changes were a new summons form making the court appearance date more prominent, robocall and text message reminders for those with summonses, and a more flexible system allowing individuals to appear in court up to a week in advance of their scheduled court date. While these measures were originally scheduled to begin this summer, they are now slated to start in early fall.

Sarah Solon, chief external strategy officer at the Mayor's Office of Criminal Justice, stated that the timing for the proposed reforms remains unchanged and that the measures will go into effect sequentially. "The new summons form has to roll out first, because it will collect the cell phone numbers that will allow for text message reminders and contain information about the flexible appearance dates," said Solon via e-mail. That new form will be released citywide within the next few months, Solon said, and going forward the form will collect data on an individual's race/ethnicity in order to ensure transparency in the summons process and provide important data.

The next Begin Again event is also scheduled for the fall-it will be held on September 12 in East New York. The flyer for the event - which will be posted around the borough and shared on social media as the one advertising the last one was - says, "we can help you take care of that old warrant." The literature seeks to reassure people: "over 1,000 people attended the last event," it says, followed by "no one was arrested" and "everyone got help."

Ryan said she and her colleagues at The Legal Aid Society hope other DA offices will follow Brooklyn District Attorney Thompson's lead in hosting such events.

So, apparently, does Thompson. In a July 15 letter addressed and hand-delivered to Mayor de Blasio with Chief Judge Lippman copied, Thompson urged the mayor to take the Brooklyn 'Begin Again' initiative citywide. Of the current way of doing things, Thompson wrote, "We simply cannot continue down this path any longer."