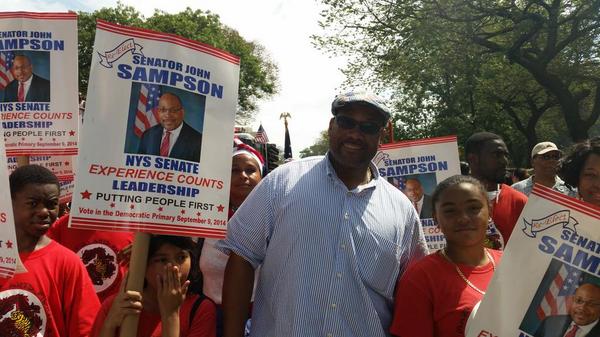 It would reason to think that the conviction of two legislative leaders would lead to a flurry of anti-corruption activity in any state capital. But in Albany, where the new normal appears to involve multiple convictions and indictments of sitting lawmakers every year, last week's crime blotter appears to have barely turned a head. The convictions of Republican Senate Deputy Leader Tom Libous and Democratic Sen. John Sampson, a former Majority Leader, on charges of lying to the FBI (Sampson was also convicted of obstructing justice) don't appear to have had much of an impact at all on reform efforts, despite ongoing calls for action from those who don't work at the capitol.

Good-government groups including the New York Public Interest Research Group, Reinvent Albany, Common Cause, and Citizens Union have reiterated calls for a special session on ethics reform, calls that began in June at the end of the legislative session. That was the session that saw the indictments of Democratic Assembly Speaker Sheldon Silver and Republican Senate Majority Leader Dean Skelos - and that produced little by way of reform.

"Normally, in a rational world, these indictments would shock the legislative body into action, but it ain't gonna happen, not in New York," said Doug Muzzio, professor of political science at Baruch College.

Governor Andrew Cuomo, the man who could compel the Legislature to return to session, made it crystal clear during a radio interview last week that he has no intention of doing so. "A special session to do what? I mean, we've proposed every ethics law imaginable," Cuomo said in an appearance on The Capitol Pressroom. "We've proposed and accomplished unprecedented disclosure," the governor added, referring to what did get done.

On Tuesday, Cuomo reiterated that a special session is not in the cards. Speaking to reporters after an event near Lake George, Cuomo said, "I haven't heard anything from the Senate or the Assembly saying, 'Our minds are changed, we now want to pass a bill that we didn't want to pass.' So for the taxpayers to spend a lot of money to bring the legislators back to Albany for the same outcome they had several weeks ago makes no sense," according to Capital New York.

Cuomo's stance has a number of advocates concerned that he has abandoned reform efforts because the public has grown numb to the cloud of scandal that hangs around the state capitol - a cloud voters appear to be attaching to the governor in public opinion polls. Advocates also worry Cuomo has gone as far as he is willing to go on reform and is digging in to defend the reforms he has made, despite the fact that they haven't quelled the tide of indictments.

"It sounds like he's throwing in the towel," said Blair Horner of NYPIRG, one of the reform groups calling for a special session to deal with corruption. "He is trying to create an environment where action is not on the table. He dreamt up the current system, so it could be that he is trying to protect it."

Muzzio said that Cuomo is making the only play he has at the moment. "The upper house is going to come back and do nothing," Muzzio said of the Republican-controlled Senate. "The governor is making a sound governmental argument - he's asking what would the purpose be of having a special session when we know the bottom line is nothing is going to happen."

Other Democrats, including Cuomo rival Attorney General Eric Schneiderman, have been advocating a special session to take on an overhaul of ethics enforcement. Schneiderman has been touting his "End New York Corruption Now Act" that would create a system of public campaign financing, eliminate outside employment for legislators, extend legislative terms, and allow the AG to prosecute public corruption, among other things.

Sen. Brad Hoylman, a Manhattan Democrat and constant advocate for reform, told Gotham Gazette he thinks a special session on ethics reform is desperately needed. "I can't think of anything that would better help excise the opprobrium from last week's twin state Senate convictions than a special session entirely devoted to ethics reforms," said Hoylman. "No more piecemeal fixes or trimming around the edges; it's time for Albany to address ethics comprehensively and head-on. Let's come back from our vacations and get to work closing the LLC loophole, restricting outside income, and rationalizing our campaign finance system. If this effort isn't begun now, it'll have to be addressed in January when we return."

Senate Democratic Leader Andrea Stewart-Cousins indicated during an interview on The Capitol Pressroom on Monday that she would be more than willing to bring her conference back for special session should Cuomo call one. But she said she doubted Senate Republicans would be interested. "I have not, he has not, we collectively have not been able to get our Republican Senate colleagues to actually be serious about real, strong ethics reforms," Stewart-Cousins said, referring to the governor.

It isn't just the indictments and convictions that have reformers concerned. They point out that recent campaign filings show that candidates are taking in increasing amounts of campaign cash through the LLC loophole that allows corporations to flout donation limits by the creation of multiple LLCs. Developer Glenwood Management was the largest abuser of the system before it became entangled in the corruption cases against Silver and Skelos.

Both Cuomo and Schneiderman, who have decried the loophole and called to close it, were major beneficiaries of it in the last election cycle. Now, filings show that Schneiderman took in over $260,000 from LLCs since January; Cuomo took in $1.4 million from LLCs in the same period.

Meanwhile, two ethics enforcement units created under Cuomo's watch appear either slow to action or crippled by infighting. The Joint Commission on Public Ethics, or JCOPE, has been criticized for being the puppet of Cuomo and legislative leaders and its board has seen repeated turnover in its leadership. Legislative appointees are currently fuming over what they say is outside interference from the executive.

Four legislative appointees wrote the Albany Times Union expressing dismay at recent executive hires and appointments and stressed that the next JCOPE director must be found outside of state government (i.e. without direct ties to Cuomo). "If the next Executive Director is not hired from outside State government after an exhaustive search, the public trust will be inexorably destroyed," reads the letter.

"JCOPE is disintegrating," said Horner of NYPIRG. "What better time to act on a new system?"

Cuomo's enforcement counsel at the Board of Elections has also been criticized for being slow to move on the most basic enforcement issues. And the Board recently declined to close the LLC loophole, which it had created years ago.

Muzzio said he believes there will have to be major public outcry before the Legislature gets serious on reform. "You need someone charismatic enough to carry the message, because people forget about it unless they are forced," said Muzzio. "That kind of messenger just ain't there. The governor has been gun-shy since the SAFE Act hurt his poll numbers. I don't think he's gonna push it. It's gotta be another guy. There's Schneiderman, but he doesn't have the same cache as the governor. He can't deal."

Horner said it is obvious to him that New York does have a new, charismatic, corruption-fighting figurehead. He says Cuomo relinquished his status as "conductor of the reform train" to the U.S. Attorney responsible for many of the Albany indictments. "The new conductor's name is Preet Bharara, and New York will go wherever he takes us," Horner said.

A July 15 Siena Poll, taken before the convictions of Libous and Sampson, found that corruption is still on the minds of voters and that legislators should probably be concerned about the issue if they want to keep their jobs. The poll found 90 percent of voters felt state government corruption is a serious problem. Meanwhile 49 percent of those surveyed said recent scandals make it less likely they will re-elect their representatives in 2016.

Horner said he doesn't have much reason to believe Cuomo is going to return to ethics reform, but he does have some hope.

"We often see governors run as reformers in their first terms, and in their second terms become defenders of the status quo - because they become the status quo," said Horner. "Now, perhaps [Cuomo] thinks he will have more leverage next year around the budget. I would argue there is no better time than now. I don't think we've ever seen two legislative leaders convicted in the same week."