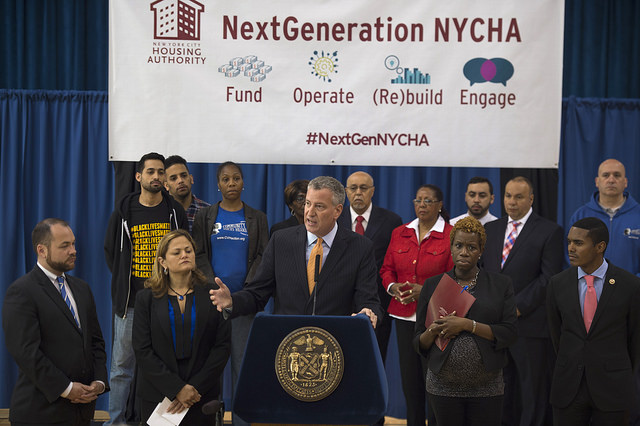 The mayor touted the number of affordable apartment units - 20,325 - as a one-year record, and far from anything seen in the city since Mayor Ed Koch’s ambitious housing plans of the ‘80s. The 20,000-plus, which includes both new and preserved units, is a big first step toward the de Blasio administration’s plan to build 80,000 entirely new affordable units and preserve another 120,000 over the next ten years. And, at a July 13 press conference, Mayor Bill de Blasio celebrated the accomplishments of his first full fiscal year in office.

But, in addition to political and economic capital, the 80,000 new units key to de Blasio’s plan require substantial space: a challenge in crowded and expensive New York real estate. In an attempt to clear this hurdle, the administration is revisiting an idea from the final months of the Bloomberg years: facilitating private development on property owned by the New York City Housing Authority (NYCHA).

De Blasio is seeking to at once short up NYCHA finances, make inroads toward his affordable housing goals, and, it appears, foster community development around public housing long seen as isolated. In fact, the latter may see the most progress of all three goals as the administration moves on so-called “infill” development.

In May, the de Blasio administration announced NYCHA Next Generation, a ten-year plan to raise capital for the beleaguered public housing authority through focused private development on its campuses. Under the plan, land on NYCHA campuses will be leased out to private developers, who will build new rental units adjacent to existing public housing. While NYCHA will not operate the developments, new apartment buildings will be required to include a proportion of affordable housing, and the agency will retain ownership of all property and receive revenue from the ground leases.

Although the numbers are promising, impact from the newly built housing may be greatest as a targeted investment in community development, rather than just a five percent contribution to the goals of Housing New York. Infill can be a vehicle toward integrating public housing in a surrounding community. Beyond affordability, smart development on NYCHA’s “underutilized and unutilized” land has the potential to make an impact on other long-awaited reforms called for by community, transit, and planning advocates.

The Nature of Infill
Developing on under-utilized land in urban areas is often broadly referred to as “infill development” -- and combining infill development with affordable housing has a notably mixed history in New York City, especially when involving NYCHA. High costs of developing on small parcels of land can often become unfeasible for developers unless building at incredible density -- often defying existing zoning codes -- or for a small number of luxury units.

Historically, in an effort to spur affordable housing, the city has offered incentives both in the zoning code and in tax breaks, including the state’s controversial 421-a program, which was infamously used by the developers of the luxury tower One57 Park to earn a tax abatement of as much as $66 million, in exchange for building only 66 affordable units at a different site in the Bronx.

In 2013, the Bloomberg administration similarly proposed leasing NYCHA property for private development. The plan drew ire from affordable housing advocates and politicians, including then-candidate de Blasio, for extending the same low proportion of affordable housing as in other Bloomberg-era affordability programs: 20 percent affordable, 80 percent market-rate. Under fire and counting the days until exit, the Bloomberg administration ultimately deferred action on the NYCHA infill plans to the de Blasio administration.

The recent revision of 421-a in Albany, Mayor de Blasio’s recently announced mandatory inclusionary zoning proposal, and NYCHA Next Generation all similarly aim to mandate higher proportions of on-site affordable housing development than the norm during the Bloomberg years.

NYCHA and the Mayor’s Office have been quick and adamant to emphasize that Next Generation is different, particularly in that it will require much higher proportions of affordable housing when building on NYCHA grounds. The first three Requests for Proposals for three sites in Brooklyn and the Bronx are all for 100 percent affordable housing units. And going forward, the exact proportion of affordable housing requirements will be evaluated on a case-by-case basis.

So far, community advocates seem to be pleased with this new approach. Moses Gates, Director of Planning and Community Development at the Association for Neighborhood and Housing Development (ANHD), praised the current administration’s approach as balanced: “under Bloomberg we saw it go all the way to one direction, where the idea was let's just do the deals and get as much money as we can for NYCHA,” said Gates. ”The de Blasio approach is a balanced approach, where we are trying to build low-income housing but we are also trying to improve NYCHA's financing situation.”

However, Husock worries that filling in land with affordable units may have much more limited effects than market rate development would. “20,000 units, $618 million in direct city funding, that means that a relatively small number of New Yorkers are going to get the benefit of an extremely large investment on the part of the city,” Husock said, referring to the 20,000 new or preserved units touted by de Blasio for fiscal year 2015.

Moreover, affordable units risk wasting an opportunity to fully leverage the ground-leasing revenues at potentially high-value sites such as the Ingersoll Houses in Fort Greene, Brooklyn -- one of the sites included in the first round of RFPs. In Husock’s view, when NYCHA opts for 100 percent affordable sites, “the beneficiaries become those in the apartments and not those in the surrounding areas.”

Balancing the value of building more affordable units against the prospect of raising revenue is a task that the administration will have to carefully navigate when drafting each RFP. With each decision, NYCHA is likely to draw criticism from those who would prefer to see either maximum affordability or maximum revenues. Ultimately, to Husock, it comes down to the question, “is our goal to create more units no matter where, or is our goal to diversify economically as many neighborhoods as we can, even if it’s for a relatively small number of lower income tenants?”

While Husock’s question may be a very good one, a fundamental idea underpinning Next Generation is that development on NYCHA campuses could have potential knock-on effects beyond the apartments for the new residents themselves or the revenue for NYCHA.

Community Development by Another Name
To some affordable housing advocates, development outcomes are decidedly not just about the number of units, despite the mayor’s focus on the figures. Gates of ANHD is explicit: “it's not the point to just produce whatever you can however you can … When we give the administration credit or try to hold the administration accountable, it's not because they hit their number or they didn't hit their number, it's because they're building the right kind of housing, and they're approaching it in a community-based way.”

The perspective is not limited to advocacy. City Council Member Brad Lander, a leading voice on affordable housing in the Council’s Progressive Caucus and the Council’s Deputy Leader for Policy, acknowledges that in the grand scheme, “the new units proposed in the mayor's plan won't be enough to change the broader market dynamics.”

Rather, Lander highlighted that new units would not only benefit their future residents, but also alter an entire neighborhood’s “ability to stay diverse and be inclusive down the road, and [the new units] certainly prevent the problem from getting worse.”

NYCHA complexes are often a series of public housing towers that become isolated, insular neighborhoods unto themselves.

For Gates and ANHD, considering affordable housing as an element of a larger community empowerment initiative is ideal. “Optimally, the approach of the housing plan, and the administration policy overall, is a way to empower local communities, to invest in local communities, to create stable sustainable livable neighborhoods,” Gates says.

In some instances, community development could be achieved by just the act of building anything at all, regardless of whether the focus is affordability or generating revenue.

Rethinking “Towers in the Park”
A near-inevitable consequence of developing NYCHA-owned land is a revision of the widespread “tower in the park” design of many campuses. From the 1940s to ‘70s, many public housing sites were designed as several stand-alone towers among large superblocks of open space. Community advocates and urbanists, famously including Greenwich Village journalist and activist Jane Jacobs, have long criticized the designs for their insular nature and inefficient use of space. Proponents, on the other hand, point to the value of urban campuses and green space among an ever more congested New York.

Often, the question comes down to what counts as meaningful open space. In this light, parking lots have been the source of much criticism from not only design- and planning-oriented urbanists, but also policymakers and developers, who view the land as a latent opportunity for either new development or more responsive urban design.

In many city zoning codes, new residential developments are mandated to provide a minimum amount of parking. Reforming these requirements on NYCHA campuses is already popular with transit advocates, who warn of worsening traffic and incentivizing car ownership. Recently, transit advocates, looked to a Department of City Planning report issued in the final days of the Bloomberg administration as a vague sign of movement on parking reform.

Two of the three developments initially announced for infill in the NYCHA Next Generation plan capitalize on parking lots as sites of development. The Mill Brook and Van Dyke sites, in the Bronx and Brooklyn respectively, will both see development directly on existing accessory parking lots; and at all three sites, there are no new parking requirements accompanying new housing.

Council Member Lander endorses the sentiment behind utilizing parking lots as sites for development, noting “I don’t think the city has an obligation to provide free or reduced-cost parking to car-owning New Yorkers, whatever kind of housing they live in. I would in many cases rather see parking lots used in ways that bring more public benefit.”

Of course, some residents and tenant associations remain skeptical, even when developments  are 100 percent affordable, such as those to be built at the Van Dyke Houses in Brownsville. Some tenant association leaders dispute that NYCHA incorporated community input into the final RFPs, and claim that some residents were misled into thinking they would be moving into the new units themselves. While the new developments will give preference to applicants living at any NYCHA site across the city, funding and fair housing rules prevent the agency from guaranteeing any new units to residents at Van Dyke in particular.

Lander acknowledges that much of that skepticism surrounding development on NYCHA land is “warranted by what people have seen in the past,” and that in any case, there is “just always some understandable resistance to change for [NYCHA infill].”

When evaluating sites for infill, the ability to consider local context is seen as a strength. “You have to take them on a case-by-case basis,” Lander notes, “obviously there's a big difference between a garden and a parking lot, which is not meaningful public space.”