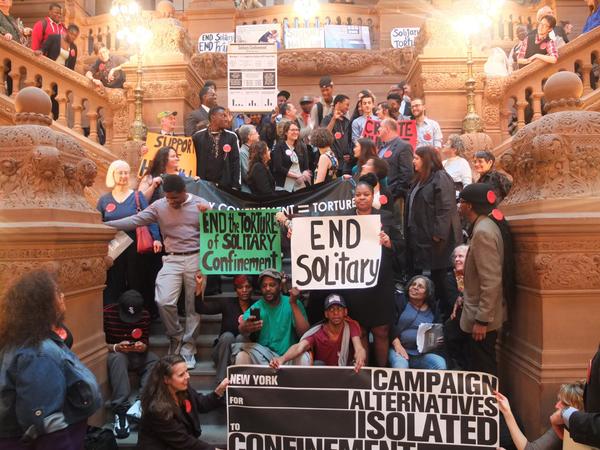 Last November he United Nations committee on torture found that the United States was not in compliance with its Convention Against Torture and Other Cruel, Inhuman or Degrading Treatment or Punishment because of excessive use of solitary confinement in prisons across the country.

The UN found that use of solitary confinement of over 15 days amounts to torture. Nearly a year later New York state has no limit on how long an inmate can be held in solitary--some have served decades. With increasing focus on the conditions in prisons, New York is struggling to address flaws in its prison system that has led to deaths and that advocates say does irreversible mental and physical damage to inmates.

Up to 5,000 inmates are held in solitary confinement at one time in New York. Inmates in solitary spend 23 hours a day in an empty room with no outside contact. The brutal conditions faced by those subjected to this form of punishment, especially at New York City's most notorious jail, Rikers Island, have been splashed across front pages, the subject of major lawsuits and federal investigations, and the topic of debate throughout all levels of government.

Rikers has banned the use of solitary for inmates under 18 years of age and a plan is in the works to disallow the placement of anyone 21 and younger, moves made following a scathing federal report from the office of US Attorney Preet Bharara. Yet, bills that would limit the length of solitary confinement and who can be held in solitary have sat stagnant in the state legislature.

Activists hope to change that with a series of protests held on the 23rd of each month at locations across New York City. The rallies are held on the 23rd to draw focus to the fact that prisoners are held in solitary for 23 hours a day.

So far The Campaign for Alternatives to Isolated Confinement have held two rallies. Their second rally, held in Rose Hill Park in the Bronx, aimed to relay the experience of Nicholas Zimmerman, an inmate in Attica who has been held in solitary confinement for the last ten of his 12 years in prison.

Zimmerman told advocates: "Since being in The SHU [Special Housing Unit], I have had a stroke, I have been diagnosed with depression and anxiety, and I have tried to commit suicide twice, and very often get these thoughts, but I fight really hard to keep my mind!"

Advocates have focused on relaying the human experience of being in solitary confinement as a way of getting the public to understand what it does to inmates and their families. Megan Crowe-Rothstein of The Campaign for Alternatives to Isolated Confinement said that the rallies have been about keeping the issue alive in the grassroots by creating more understanding.

"People really become interested when they hear what [solitary confinement] does to people and their families--especially when it comes from people who have suffered and are brave enough to share their stories," said Crowe-Rothstein.

Supporters of solitary confinement, like the city's corrections officer union, say it is an important tool to protect guards and inmates from violence, as well as an effective behavioral tool. "You run a red light, you pay a ticket," corrections union president Norman Seabrook said at a City Council hearing in June of last year. "You punch an officer in the eye, you go to punitive segregation." (Punitive segregation is the term used for solitary confinement on Rikers.)

Advocates charge that the lack of interaction and sensory deprivation created in solitary can lead to severe physical and mental conditions.

Their argument is bolstered by the now-famous story of Kalief Browder. Browder was arrested at 16 for allegedly stealing a backpack and served three years at Rikers after he couldn't post bail, eventually being released without ever being charged. Browder spent nearly two years in solitary while at Rikers and suffered beatings by inmates and guards that were captured on video. Upon release, Browder struggled to put his life back together and eventually killed himself on June 8 of this year. Browder's death led to statements from major politicians, including Mayor Bill de Blasio, and a major invigoration of grassroots attention on both the bail and confinement aspects of the system.

"There is no reason he should have gone through this ordeal, and his tragic death is a reminder that we must continue to work each day to provide the mental health services so many New Yorkers need," de Blasio said in a statement just after Browder's death. "On behalf of all New Yorkers, we send our condolences to the Browder family during this difficult time."

Bills that would restrict the use of solitary have been stalled in Albany for years. One piece of pending legislation, called the Humane Alternatives to Long-Term Solitary Confinement Act (HALT), would set major restrictions on how the punishment can be used.

The bill stipulates that no prisoner could be in solitary for more than a 15-day stretch, or for 20 days in a 60-day period. Prisoners who would be placed in solitary for more than 15 days would instead have to be sent to a separate residential rehabilitation unit with therapy and out-of-cell programming. The bill would ban the use of solitary confinement on prisoners under the age of 22 or above the age of 55, prisoners who are pregnant, who have a mental or physical disability or who are "perceived" to be LGBTQ.

This year the bill was referred to the Senate and Assembly corrections committees in January and never voted to the floor. In 2014, the same fate, as the bill's Assembly sponsor, Assemblymember Jeff Aubry, said the gubernatorial election would stymie any action.

A number of legislators concerned with criminal justice issues told Gotham Gazette that it was disheartening that the leadership of their houses did not take up the measures related to solitary given the public's focus on criminal justice issues stoked by police killings of unarmed civilians and deaths at Rikers Island. Legislators asked to remain anonymous due to concerns about angering leadership.

Advocates plan to continue their rallies into the next legislative session, giving themselves a head start on lobbying efforts when legislators return to Albany in January. The next rally will take place Wednesday, September 23 - the location has yet to be announced.

One of the roadblocks to reforming the state's use of solitary is the city's corrections officers union. Norman Seabrook, president of the 9,000-member union, lobbied hard to keep solitary confinement policy as it was in the city. He threatened to sue the Board of Corrections for every officer that was injured by an inmate after the board banned solitary confinement for those under 21.

The city's corrections board is expected to discuss further reforming solitary at upcoming meetings but no action is imminent. "Rikers gets so much attention for good reason," said Crowe-Rothstein, "but there are people in solitary across the state who are suffering and the state must act to change that."

Note: this article has been corrected to reflect the fact that 16- and 17-year-olds are now banned from being placed in solitary confinement on Rikers Island and that banning those 21-and-under is in the works, but not final, as originally stated.