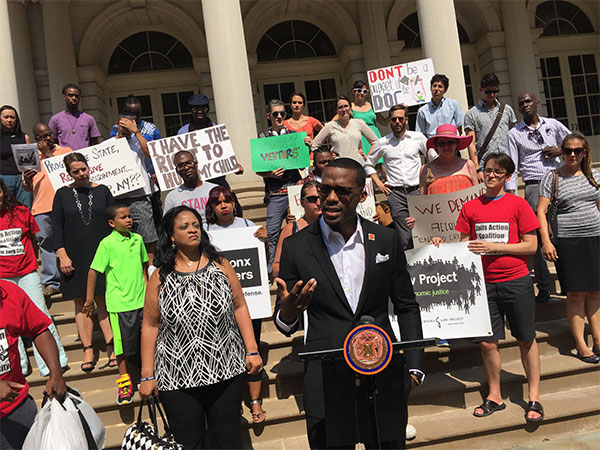 On Tuesday, City Council members, faith leaders, and activists spoke out against Mayor Bill de Blasio’s proposed restrictions for visitors to Rikers Island jails. At a rally on the steps of City Hall organized by the Jails Action Coalition, speakers called de Blasio’s plan to limit visitors and physical contact by those who do visit inmates counterproductive and wrong.

The proposed rules seek to limit the physical contact inmates may have with visitors, broaden the criteria for restricting visitors by allowing the Department of Correction to consider factors like criminal record, and establish a visitor registry.

“I want to remind everybody that the overwhelming majority of people who are on Rikers have not yet been convicted of the crime for which they are being held,” City Council Member Daniel Dromm, of Queens, said at the Tuesday press conference. The jail complex has an average daily population of about 11,400 – roughly 85% of whom are pretrial detainees.

Others, like Tanya Krupat, Program Director for the NY Initiative for Children of Incarcerated Parents, say that what is “most concerning is the way they’re talking about looking into the backgrounds of visitors and making an assessment about whether that person is deemed a threat, including a threat to the ‘good order of the facility,’ which is very vague.”

Krupat added, “the potential for arbitrary subjective implementation of these is what’s really worrisome. Where are the checks and balances? They have over 1,000 visitors coming in every day, and over 3,000 children visiting each month, so who is making these decisions?“

De Blasio and his corrections commissioner, Joseph Ponte, have been credited by prison reform activists for other changes they’re making at Rikers, including around treatment of mentally ill and younger prisoners. The proposed visitation limits fall into a different category - and the city’s Board of Correction will hold a public hearing in the near future before voting on the plan.

Advocates for the incarcerated and their families fear that the proposed changes will harm the mental well-being of those imprisoned on Rikers Island by denying inmates the much-needed sense of support and connection that visits from loved ones bring. “I believe the proposed plan to restrict visitation has the capacity to deteriorate the already-fragile family unit of people of color, contributing to depression, isolation, loneliness, and increased recidivism,” Reverend Que English, Chair of the NYC Clergy Roundtable said.

Asked about this criticism, a spokesperson for the mayor, Monica Klein, wrote Gotham Gazette to say, “Commissioner Ponte understands how important family relationships are in the rehabilitation and re-entry of inmates, and DOC’s proposed visitation policy will allow the Department to foster the kind of positive visitation environment that help inmates’ well-being while maintaining the safety and security of the facilities.”

Some see the stricter visitation rules as a give by de Blasio in order to obtain support for other reforms he’s making and seeking at Rikers, such as his work to reduce solitary confinement and separate younger offenders and detainees.

The proposed rules would restrict the amount of physical contact between inmates and their visitors to a “brief embrace and kiss between the inmate and visitor at both the beginning and the end of the visitation period.” There is currently no limitation on physical contact like hugs and hand-holding during visits.

Speaking about the importance of physical contact with a loved one, Anisah Sabur, who was incarcerated on Rikers for eight months in 2008, said, “being in a place surrounded by people that you don’t know, to see somebody that you know, be it your loved one, your mother, your brother, that hug and that holding of the hand is very important for somebody on the inside who doesn’t know when they’ll get that again. That love and affection is truly needed for somebody to keep their sanity.”

Significantly, critics of the proposed policy changes have pointed out that a majority of the contraband at Rikers is not smuggled in by visitors. During a May 12 Board of Correction meeting, board member Dr. Robert Cohen noted that the BOC’s recent report using data from the Department of Correction showed that 80% of weapons recovered on Rikers are constructed on site, meaning they were not brought in by visitors or staff.

Additionally, as Dromm (pictured below) mentioned during the rally Tuesday, a 2014 investigation conducted by Mark Peters, Commissioner of the Department of Investigation, “found that the majority of drugs that were getting into Rikers Island were being brought in by corrections officers themselves.” 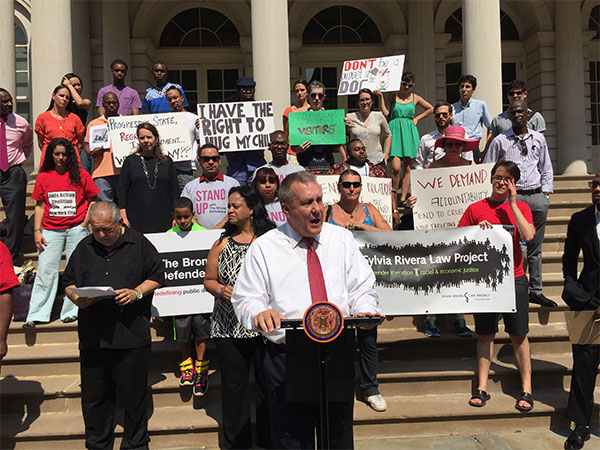 City & State NY reported that the city has said “371 [visitors] were arrested in fiscal year 2015,” meaning that with over 1,000 people visiting Rikers every day, a small fraction of those visitors are contributing to the flow of contraband into the jail complex.

“You’re changing policy [in response to] less than 1% of the visitors who come in,” Krupat said at the press conference yesterday. “That’s not how policy is made.”

However, the de Blasio administration says it is responding to an increase in those arrests - the 371 was up 307 in the prior fiscal year, and drugs recovered during visits were also up.

In March, when Mayor de Blasio and DOC Commissioner Joe Ponte announced the 14-point initiative to reduce violence at Rikers, de Blasio said, “we know that the reality is that so many inmates acquire weapons and acquire drugs through visitors. In fact, we know that many criminal gangs use the visitation process to pass weapons and pass drugs to their fellow gang members here in these facilities. They also pass messages. You’ve seen it in the movies – it happens in real life.”

“So, to address this problem at the root, we need a much stronger, much stricter visitor policy,” the mayor continued, “which will limit physical contact between visitors and inmates and will, in fact, restrict the right of certain individuals to visit, in the first place, if they do not pass a security screen.”

The mayor said that the proposed changes would bring Department of Correction policy closer in line with that of other large jail systems around the country that place limits on physical contact between inmates and visitors and restrict visitors based on security concerns.

Yet critics view the proposed limitations as a step backwards for de Blasio’s self-professed progressive administration, which was praised by advocates for the incarcerated earlier this year after city officials agreed to make sweeping reforms aimed at increasing safety for inmates of the violence-stricken jail complex.

“The mayor ran on not having a tale of two cities, and this is kind of a tale of two cities issue,” said Krupat. “Most people are pre-trial, they just can’t afford their bail. If you’re poor, you’re on Rikers and now maybe your family can’t come and see you, but if you have means, you’re out in the community at home eating dinner with your family. It’s kind of shocking from a progressive administration to go after visitors as part of an agenda to reduce violence at Rikers.”

The Board of Correction must approve the policy before the proposed changes to visitation rules can go into effect. The BOC announced Tuesday that it will hold a public hearing on the proposed rules, though the date has not yet been set.