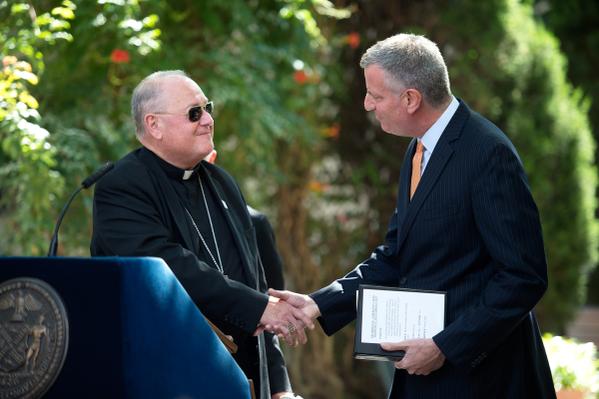 At a press conference Wednesday, the day before the pope is due to arrive in New York, de Blasio again spoke highly of Francis and pointed to the pope's moral authority and inspiration when announcing a partnership with the Archdiocese of New York to provide additional beds to homeless New Yorkers.

"Pope Francis is calling us all to action...asking all of us to do more to help those in need," de Blasio said Wednesday as he, Timothy Cardinal Dolan, and others outlined new steps to help homeless individuals through city partnerships with faith-based organizations.

As de Blasio and other New Yorkers anticipate Pope Francis' Thursday arrival, the mayor is able to frame his efforts to fight inequities and help struggling and vulnerable New Yorkers in terms of the pope's worldview.

Citing Francis' messages on economic, environmental, and social justice, de Blasio continues to point to the pope as the moral standard-bearer, repeatedly praising Francis for his bold vision for a better world. This has included, for example, the mayor quoting Francis' critique of trickle-down economics.

Though the mayor is a municipal executive, he has sought to take his own message national and global. In Pope Francis, de Blasio may have found the most powerful validator of his fight against inequality.

"We have to do everything we can do to create a more just society," de Blasio said Wednesday, referring to the pope and his mandates. "We are amplifying the pope's agenda. We are answering his call to action," the mayor said, explaining that it is imperative the city takes care of all New Yorkers in need in order to truly be "the greatest city in the world."

Upon arriving in the United States, Pope Francis spoke at the White House Wednesday morning. He called for participation in his mission, saying, "I would like all men and women of good will in this great nation to support the efforts of the international community to protect the vulnerable in our world and to stimulate integral and inclusive models of development, so that our brothers and sisters everywhere may know the blessings of peace and prosperity which God wills for all his children."

For de Blasio, there is undoubtedly great appreciation of Pope Francis' pointed critiques of the social and environmental impacts of a changing world. But, de Blasio is also able to utilize Francis in support of his agenda, which comes as welcome help to a mayor who has had his share of detractors.

Still, promoting the pope and some of his messages also creates conflict for the mayor, who has described himself as a person of faith, though not particularly religious. De Blasio must face criticism from those who say that he is blurring lines of church and state and figure out a way to explain why Francis is so right on certain issues like climate change and immigration, but not a moral authority on others, like same-sex marriage or abortion rights.

De Blasio has made his adulatory relationship with Francis one of convenience, as is often the case with political allies, and mostly sidestepped those criticisms and conflicts.

When asked about specific areas where the mayor disagrees with the pope and criticism of the city promoting the leader of the Catholic Church, de Blasio spokesperson Monica Klein wrote Gotham Gazette to say that Pope Francis is "a leading global voice on ending income inequality and fighting climate change—issues that are important to people across all faiths in our city." In one public area of criticism, de Blasio did say this summer that the Catholic Church must be more inclusive of women.

Klein also wrote that "When any visiting dignitary travels to New York City, the Mayor works to accommodate their visit and provide appropriate security." The mayor has himself said similar things when questioned by reporters.

Well before the announcement of the pope's visit, even before de Blasio's July visit to the Vatican for a conference on climate change, de Blasio began citing Pope Francis as an essential voice in the fight against inequality, and thus a validator of the mayor's agenda, which includes creating affordable housing and reforming the criminal justice system.

It is uncertain that Pope Francis will discuss de Blasio's work in any specificity while in New York, but the mayor will greet the pope at Kennedy Airport Thursday and accompany Francis at most of his public appearances, which include a speech at the UN and a visit to an East Harlem school.

Like the pope, de Blasio has sought to tie economic and environmental justice together, releasing his OneNYC plan with long-term goals for sustainability, housing, and poverty-reduction.

De Blasio gladly accepted the chance to speak at the pope's climate conference. At the Vatican, de Blasio said of Pope Francis, "This is a leader such as we haven't seen before, really. He is saying things so clearly and so powerfully all over the world that need to be said...What he is doing is, he's creating an international voice of conscience that I can't think of any previous parallel for." 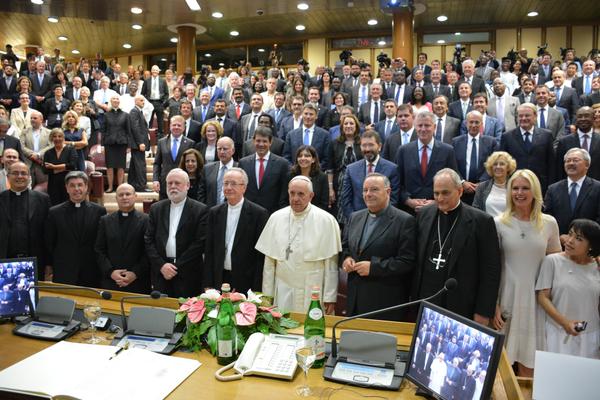 As de Blasio and Francis hit several similar themes, they are hearing similar attacks. While de Blasio is being called out by some for overstepping the secular ideal of city government, Francis is being criticized for being overly political.

De Blasio has been painted as a liberal boogeyman by many on the right and Francis has begun to hear similar barbs. Republican Congressional Rep. Paul Gosar, from Arizona, is among those who planned to boycott Pope Francis' speech in front of Congress because he is dismayed that the pope is taking on climate change. In a recent op-ed explaining his criticism, Gosar wrote, "When the pope chooses to act like a left­ist politi­cian, then he can ex­pect to be treated like one."

One can imagine de Blasio hearing this and smiling.

When in Rome, de Blasio discussed being convened by Francis to take part in efforts to combat climate change, saying, "having the support of His Holiness is the most encouraging thing I can think of. It's the most empowering possibility to have the strongest moral voice in the globe today calling us to action."

On Tuesday, Governor Andrew Cuomo, a political force de Blasio has had limited success marshalling to his advantage, spoke of Pope Francis. "In some ways, ironically, the pope's message isn't even religious. It is so universal that it is just humanitarian. It's communitarian," Cuomo told NY1's Zack Fink.

Here, de Blasio and Cuomo are on the same page, looking to the world's preeminent religious figure as a voice for universal righteousness. On Wednesday, as de Blasio invoked Francis' name again and again, he repeatedly stressed a non-religious message, at one point saying, "All of us can feel commonality in Pope Francis' vision of a more inclusive society. It doesn't matter, again, what faith you believe in – Pope Francis is a moral voice, speaking to all of us, calling all of us to action."