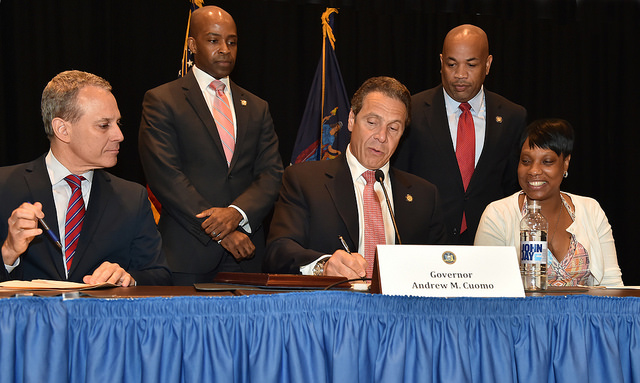 The administration of Gov. Andrew Cuomo has begun to implement a series of reforms designed to make it easier for former inmates to win employment, access health care systems, and find housing upon re-entering society.

The administration is moving on 12 recommendations put forward by the governor's Council on Community Re-Entry and Reintegration, a body made up of 28 criminal justice experts including Alphonso David, counsel to the governor; Elizabeth Glazer, director of the New York City Office of Criminal Justice; Soffiyah Elijah, executive director of Correctional Association of New York; and Glenn Martin, head of Just Leadership USA.

Gov. Cuomo has taken a series of executive actions to address criminal justice reform issues this summer; actions that include naming Attorney General Eric Schneiderman as special prosecutor to investigate police killings of unarmed individuals and calling for the removal of 16- and 17-year-olds from adult prisons.

Speaking with Gotham Gazette, Alphonso David said that the administration is also trying to battle the view held by some former inmates that the state and society have written them off.

"This is a perception issue that we all have to deal with," said David. "If the men and women who have served their time in prison and are released believe there are no opportunities, and unfortunately have experiences that feed that perception - that employers are not interested in employing them; that there are no housing opportunities for shelter; that there are absolutely no services or resources for support - then what we are doing is saying the only option for them is crime. We have to change that perception. Creating opportunities benefits jobseekers, saves taxpayer dollars, and supports public safety."

Several of the actions taken by the administration are designed to lower the impact having a previous conviction has on securing state-funded housing, employment with the state, and occupational licenses.

Another already-enacted change makes it easier for inmates to obtain state identification from the Department of Motor Vehicles once they are released from prison. Advocates say state ID is critical to obtaining services and employment and yet, according to state officials, only 29 percent of people released from state facilities had obtained such ID six months after their release.

Another reform is designed to allow inmates to save money they are sent by relatives so they have some financial stability upon release. Prior to this reform money inmates received went primarily to paying off fines they had incurred. However, paying restitution will remain a priority for any money inmates receive.

The state has also made the formerly incarcerated a focus of supportive housing initiatives and issued guidelines for the construction and operation of new supportive housing for mentally ill inmates returning to New York City. The Cuomo administration has faced mounting criticism from advocates and elected officials, though, for not providing what they see as adequate funding for supportive housing in the city.

The Department of Health and Department of Corrections will team up to enroll departing inmates in Medicaid. Many inmates suffer from hypertension and diabetes and, upon release from prison, frequently seek treatment at emergency rooms rather than regularly seeing a doctor. State officials say enrolling former inmates in Medicaid will better their outcomes and save the state money.

Finally, the state has done away with red tape that has historically made it extremely difficult for returning inmates to live with their spouses and partners even when there was no history of domestic violence. Members of the re-entry council say that the odds of an inmate committing another crime are greatly reduced when they return to live close to their families.

State Senator Gustavo Rivera, a Bronx Democrat who has worked closely with a number of the council members, praised the administration's fast implementation of the recommendations. "These recommendations will tear down barriers that the formerly incarcerated face in finding employment and housing," Rivera told Gotham Gazette. "I'm glad to see these recommendations and to see the governor implement them so quickly."

Rivera said he hopes to see the re-entry council continue its work and noted that he is carrying two bills that could potentially be addressed by the council. One bill would require that the Department of Corrections considers the location of an inmate's family when deciding where they will serve their sentences, as a means to reduce recidivism by keeping inmates as close to home as possible. Rivera is also advocating the state provide college education for inmates, something the Cuomo administration went to bat for in 2014 only to abandon after facing intense political backlash.

"We need both of these things," said Rivera. "Not just because they are the morally correct things to do, but because both will reduce recidivism and save the state money."

Rivera said the council's work has sparked more conversations on the issues and has assisted the legislature in deciding what it should focus on in terms of criminal justice issues. "I hope they continue the conversation because it helps draw the line as far as what can be done by the executive and what needs to be done legislatively," Rivera said.

David, Cuomo's counsel, said that the council will be continuing its work with a focus on how to involve the federal government in the reentry conversation, and on improving access to education and housing. That does not mean, however, that the council will ignore issues like college for inmates, or sentencing issues. An administration official told Gotham Gazette that while the council's focus is on issues former inmates face they will not "ignore opportunities that exist within the prison system."

David said he is happy to hear that the council's work has had an impact on some members of the legislature as there will likely be more criminal justice issues that require legislative action next year. "I do hope these actions advance policies and incentivize the legislature to take actions to improve the lives of all New Yorkers and advance new legislation," David said.

Members of the council say they are ready to get back to work.

"We accomplished our goals this year but our work is far from over," said Council Chair Rossana Rosado in a statement. "As we look to address many more of the systemic barriers encountered in re-entry, we will not lose sight of New York's role as a leader in combating the devastating impact and stigma of second class citizenship that so many of our fellow New Yorkers face, especially men of color."