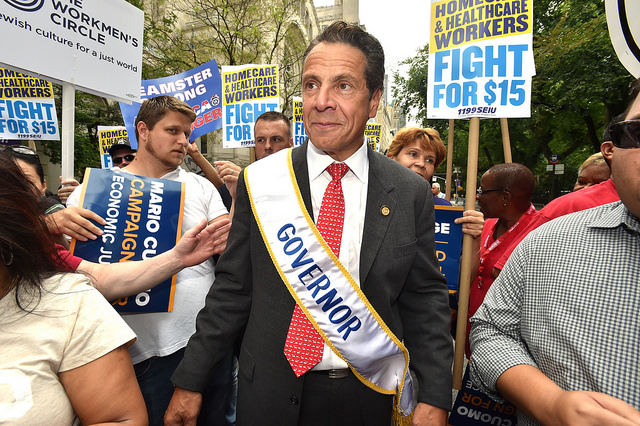 Gov. Cuomo (photo via The Governor's Office via flickr)

Many of Gov. Andrew Cuomo's staunchest progressive critics appear to be convinced by his new push for a statewide $15 an hour minimum wage. Cuomo has repeatedly angered the left wing of his Democratic Party by supporting Republican candidates, backing charter schools, and routinely making middle-of-the-road compromises on various issues. Only a few months ago Cuomo scoffed at the idea of a $13 minimum wage, but now advocates and legislators who have repeatedly felt betrayed by Cuomo say they believe firmly that he plans to see through the $15 hourly wage.

"I have been a harsh critic of the governor sometimes," said Michael Kink, executive director of Strong Economy For All, "But this is going to be a big deal in the lives of so many New Yorkers and it is worthy of straightforward applause."

Democratic state Senator Liz Krueger, who has has repeatedly clashed with the administration on policy issues, told Gotham Gazette: "The governor has gone through an evolution and he is now at a wage that is greater than my conference put forward. I think it is a good thing."

Two elements of Cuomo's approach appear to have convinced progressive critics of the sincerity of his push.

The first is that Cuomo has made himself the first major elected New York state official to advocate the $15 minimum wage and the plan he supports is comparable to those passed into law in Seattle and Los Angeles and proposed in ballot initiatives in Washington, D.C. and California.

Secondly, Cuomo has made the fight personal by naming his plan the "Mario Cuomo Campaign For Economic Justice," after his father, the late governor.

Kink, a frequent, vocal critic of the Cuomo administration, has nothing but praise for Cuomo's wage push. "This will absolutely make a difference in people's lives. The phase-in schedule he is talking about is comparable to what other places are talking about. If we could wave a wand and get it today it would be wonderful," said Kink, acknowledging there's no chance of immediately shifting the minimum wage to $15 an hour. As recommended by his fast food wage board, Cuomo is calling for a phased-in $15 hourly minimum wage by 2019 in New York City and in 2021 all across the state.

Noting that the governor has had "varying levels" of commitment on progressive issues in the past, Kink sees new life from Cuomo on the wage. Cuomo has "supported" efforts on the DREAM Act, campaign finance reform, and the Gender Expression Non-Discrimination Act (GENDA), but has not made powerful public or behind-the-scenes-efforts to enact them.

The path to Cuomo's support for a statewide $15 wage took form earlier this year when he called on the state labor department to convene a wage board to examine compensation for fast-food workers. The board held hearings across the state, hearing from many workers, who also staged large rallies outside those hearings and elsewhere. James Parrott of the Fiscal Policy Institute said he believes the hearing testimony was extremely impactful for Cuomo.

"I can't help but think that incredibly compelling testimony of hundreds of fast-food workers from across the state moved the governor," said Parrott. "The testimony really got across how much worse the reality (of surviving on minimum wage) is to how many close observers like myself thought it to be."

In July, the wage board recommended that large fast-food chains pay their workers $15 an hour by 2019 in New York City and mid-way through 2021 in the rest of the state. Cuomo seized on the wage board's efforts, holding a celebratory rally just after its recommendations were made public. A $15 wage polls very well with Democrats in the state.

On September 10, Cuomo announced that he was advocating an eventual $15 minimum wage for all industries, to be implemented along the wage board's recommended timeline.

Krueger said that by using the wage board in the fight for an increased minimum wage, Cuomo spotlighted a power that past governors did not utilize.

"For decades we've know you could use a wage board in this manner, but the governor showed leadership in doing so," said Krueger. "I'd prefer legislative action, but we have been shown there are other ways to address wage issues."

In order to make the path to $15 an hour a reality in all industries, Cuomo will indeed need legislation.

Republicans have balked at the measure and criticized the wage board's recommendations as a fait accompli. They insist it will hurt businesses across the state.

"I don't agree with the wage board. I know it's a statute in the State of New York. I think that it's executive overreach," Republican Senate Majority Leader John Flanagan said during a September event hosted by Crain's New York Business. "A lot of my colleagues feel very strongly about that, and as we come into next year. I think we have to be mindful of the fact that we actually have raised the minimum wage — we're one of the ten highest states in the country already."

The state's minimum wage is due to rise from $8.75 to $9 an hour at the end of this year, per the legislation Flanagan was referring to. The Senate leader insists that the governor must go through the legislature to take this kind of action, but he did not rule out another wage increase.

Many Democrats greeted Cuomo's plan with open arms, but skeptics still exist. A number of Democrats told Gotham Gazette they fear Cuomo has only championed the issue as a means to boost his sinking approval ratings and steal political thunder from Mayor Bill de Blasio, who fought with Albany early in his term to allow the city a say over raising its minimum wage.

Critics also note that Cuomo has begun talking about pairing a wage increase with tax cuts for businesses, indicating a willingness to cut a deal with Republicans. "I think linking the two is a mistake," Bill Lipton, director of the Working Families Party said recently on The Capitol Pressroom. "I think we should have a smart, progressive tax code policy. I think it should be discussed separately from the minimum wage. The minimum wage really stands on its own."

The governor, of course, is often one to lecture on how things get done in Albany, citing the necessity of compromise and touting his successes in making progress despite a split legislature.

Cuomo has also looked to boost his fundraising with the wage effort; his campaign sent out email solicitations earlier this month asking for a $15 donation "to help us fund the fight [for $15]."

Another point of contention for some is that they believe by putting himself at the head of the $15 per hour movement Cuomo now has an increased ability to set the timeline for phase-in. Given Cuomo's predilection for compromising with Senate Republicans, these critics fear the Governor may simply increase the deadlines for implementation of the wage hike. Cuomo himself described a $13 increase as a "nonstarter" with the legislature this past spring.

An economist analyst, Parrot said that concerns about the length of the phase-in at this point are unfounded. "It's hard to know exactly what the inflation is going to be like but it is pretty nominal," he said. "It will still be worth something that is more than $9 [is now] but it is not going to be $15 in 2015 terms." Parrot said that the state budget predicts two percent inflation per year, so judging by that, "it is not as if $15 in 2021 would be wiped out."

In other words, the move to a $15 minimum hourly wage by 2021 would be significant, even taking into account inflation.

Kink said that he isn't concerned by Cuomo's comments about a business tax cut, or that the governor might cave to pressure from Republicans. "The governor showed just how high of a priority he thinks this is for the state when he put his dad's name on it," Kink told Gotham Gazette. "He has decided that this is important to his legacy."