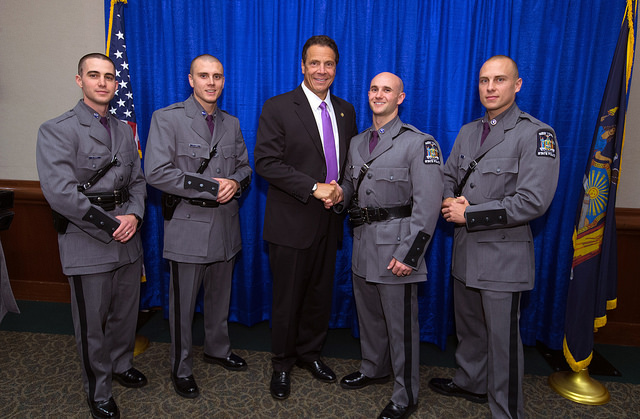 Governor Andrew Cuomo is concerned that New York City is sliding backwards when it comes to order, citing disrespect for law enforcement as a key example and decrying a lack of leadership in allowing what he sees as an unacceptable atmosphere to permeate.

In comments to reporters after the recent killing of NYPD Officer Randolph Holder, Cuomo took veiled shots at Mayor Bill de Blasio and lamented the state of society when it comes to respect for the police. Calling violent incidents against police officers "troubling signs," Cuomo said, "I believe we've had more police officers assaulted in New York than any city in the country."

In the past ten months, four NYPD officers have been shot and killed while on duty. The most recent, Holder, was posthumously promoted to detective, and his death appears to have led Cuomo to conclude there is "no doubt that we have a violence problem against police officers."

Saying that he understands police officers feeling unsupported and repeatedly stressing in a frustrated tone that New Yorkers must "respect the police," Cuomo not only intimated that he believes de Blasio has allowed an anti-police environment to take root, but raised eyebrows among some who see the governor's comments as vilifying the police reform movement.

Further, critics say Cuomo's feud with de Blasio is getting in the way of a real discussion of how to improve relations between the police and communities and that the two leaders should be working together on the issue.

On the other hand, Cuomo's comments were met with applause from some who believe that there is not enough regard for the job police officers do in New York City and their role in making the city much safer than it was a generation ago.

"The police are not the enemy," Cuomo said last week, "and we've let the dialogue shift."

"They're public servants of the highest order and leadership has to communicate that message. I'm gonna do my part because the police are right," Cuomo said, referring to what he says are police officers feeling like targets and not feeling supported.

"His fight with de Blasio isn't necessary," Siegel said of Cuomo. "We need grownups in the room. The governor could bring us together instead of pandering. It might score political points in some communities but it won't change anything. He could be in the middle of this providing the leadership that is needed."

Cuomo had given his own explanation of what type of leadership is needed at this time. "As leadership, we have to send a different signal. And the signal is 'respect law enforcement.' I understand your civil rights, I understand freedom of speech, but I also understand the role of the police."

The governor continued, "The police are right when they say there's now an atmosphere, now an attitude that the police are fair game. They're not."

When asked if City Hall was not properly leading on the issue, Cuomo declined to say which officials have not been sending the right message, only that he was going to do his part.

Douglas Muzzio, professor of political science at Baruch College, told Gotham Gazette that Cuomo's latest comments achieved two things. "The bottom line is this is another shot at de Blasio. [Cuomo] does not miss a chance to take a shot at the mayor. It is both him using the mayor as his perpetual punching bag and at the same time making strategic calculations to appeal to certain constituencies. He is making a cost-benefit analysis with the dual purpose of taking a jab at de Blasio and appealing to certain communities."

As it turns out, de Blasio's message is not one that conservatives or many law enforcement officials want to hear, while Cuomo's is.

"Police need to have the upper hand in the street," Eugene O'Donnell, professor at John Jay Rockefeller School of Criminal Justice and former NYPD officer, told Gotham Gazette. "Our leaders are perpetuating this lie that police are like everyone else. And they aren't. They volunteer to put themselves in harm's way to enforce our laws and they need our support and respect to do their jobs."

O'Donnell actually blames Cuomo for some of that anti-police sentiment because of his executive order allowing the Attorney General to appoint a special prosecutor to investigate police killings of unarmed civilians.

"The governor is trying to have it both ways." said O'Donnell. "The special prosecutor order is basically feeding into the notion that police are out there killing people indiscriminately, that this is a 1950s throwback force, with "In the Heat of the Night" kind of stuff."

Cuomo has faced stiff backlash from law enforcement and district attorneys for his executive order, which he said was part of his efforts to reduce both real and perceived problems with the criminal justice system, and he has sought to put the burden of mending hurt feelings on Attorney General Eric Schneiderman. Advocates who fought for the order say they felt they had to drag Cuomo to the signing "kicking and screaming" and were only successful because of immense political pressure.

Cuomo had promised he would sign such an order if the legislature didn't act on reforms. It became clear early in this year's session that Senate Republicans wanted nothing to do with Cuomo's proposals. The governor is expected to look for legislative action on the matter again next year, but those same Republicans appear fairly dug in and advocates note that Cuomo's rhetoric against criticizing the police is starting to more closely match those more strident supporters of law enforcement.

"We must restore the practice of stop, question and frisk so to allow our police the opportunity to better secure our neighborhoods. There is no doubt that the suspension of this policy has resulted in the uptick in crime and shootings in our City, which for many years has been the safest large City in America," Golden said, referring to de Blasio and NYPD Commissioner Bill Bratton overseeing a continued drop in the controversial tactic.

"At a time when we should be looking to keep criminals in jail and off our streets, the New York City Council is looking to create a publicly funded taxpayer bail program. I urge the City Council to immediately suspend these efforts and instead, focus on legislation that will make New York safer, not more dangerous," Golden said.

Both the de Blasio administration and the City Council have begun efforts to provide bail assistance to those arrested for low-level, nonviolent crimes who cannot afford bail.

O'Donnell said officials need to reiterate that the police need support. "Everyone is a reformer these days. The police force has been orphaned. There is now a gotcha culture in our society around the police," O'Donnell told Gotham Gazette, sounding much like Cuomo had last week.

De Blasio ran on reforming the NYPD after what some advocates, elected officials, and law enforcement officials see as an era of "over policing" under Mayor Michael Bloomberg and Police Commissioner Ray Kelly, highlighted by their abuse of stop-and-frisk. Police officials quickly went on the defensive saying that de Blasio didn't fully support them. Several months into de Blasio's term, law enforcement officials and others were incensed when they felt de Blasio put controversial Rev. Al Sharpton on equal footing as Police Commissioner Bill Bratton.

The situation was further exacerbated when, after the grand jury decision not to indict the police officer whose chokehold led to Eric Garner's death, de Blasio said he had advised his son Dante that he should be "very careful" when stopped by police.

Not long after, two members of the NYPD were ambushed and killed while on duty and hundreds of officers turned their backs on the mayor during the January funerals.

De Blasio has worked tirelessly since then to patch relations and has dialed back his rhetoric on police reform, but Cuomo has continually sought to open the wound with public comments that appear designed to exploit the rift between de Blasio and law enforcement, such as in September when Cuomo spoke after receiving the "Man of the Year" award from the Patrolmen's Benevolent Association.

Following Detective Holder's death, de Blasio struck a unifying tone. "This painful cycle we've been through reminds us, the people who serve us come from all our communities. They look like us, they are us," de Blasio said. "The police are us, they represent us."

Norman Siegel, the civil rights attorney, told Gotham Gazette that Cuomo's comments could inflame the situation between police and the community and that his feud with de Blasio is counterproductive.

"This type of rhetoric is not helpful in understanding the situation or in attempting to fix things," Siegel told Gotham Gazette. "We have to be careful nobody engages in unnecessary rhetoric or even panders on these issues because officers can be killed, citizens can be killed."

Siegel said that Cuomo should call a summit aimed at improving communication and police-community relations. He noted that Brooklyn Borough President Eric Adams, himself a former NYPD official with whom Siegel has worked on strengthening police-community relations, opened up Borough Hall for the first game of the World Series and that NYPD officers and community members enjoyed the game together. "I wish the governor could have been there," Siegel said. (Cuomo flew to Kansas City for the game on the Mets owner's private plane.)

O'Donnell said he would also like to see Cuomo take charge of the situation because he feels the police are forced to stand down in some neighborhoods because of the negative reaction they are getting from the community. He too said a summit would be a good idea, but said Cuomo should first hold a press conference to "tell the public that the police are here to enforce the laws."

Cuomo said as much when speaking to reporters last week: "[N]one of it works if you don't have the values underneath, and the fundamental value has to be this a city of law and order - yes, it's a city of civil rights - but it's a city of law and order, and one of the primary rules is 'no violence against a police officer,' period. And we need to send that message and we need to send that loud and clear - because the police are right when they say 'we're afraid to go out there because we feel that we may be a target and that whatever we do is going to be second-guessed,' that is a real problem and that's what we have to address."