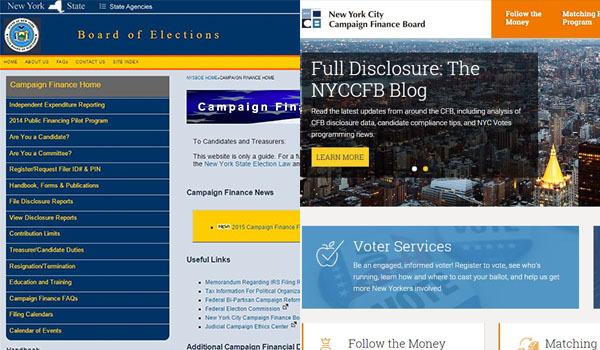 Officials from the New York State Board of Elections and the New York City Campaign Finance Board outlined plans for overhauling their respective financial disclosure tools on Friday.

Though both groups said they wanted to make it easier for campaign staff to file reports and for the public to access filings, a divide was clear between the state BOE and the city CFB in terms of current capabilities and goals. Some of BOE's planned features, such as error-checking and bulk data export, for example, are already present on CFB's platform.

Thomas Connolly, BOE's deputy director of public communications, said the board plans to roll out new finance and tracking systems by early 2017, replacing the current 1990s-era software. "Our goal is to create a state-of-the-art candidate tracking and campaign finance system that is open and transparent," he said to the audience of around 50 at Civic Hall in Gramercy. The event was co-hosted by good government group Reinvent Albany, which often scrutinizes campaign finance data and calls for significant reforms.

Currently, the state BOE operates separate and unintegrated candidate tracking and campaign finance systems—"both old enough to vote," Connolly quipped—that require a lot of manual input. BOE's new systems would integrate the two sides on the web, instead of the current desktop software. Campaign staff will file disclosures on a website—instead of using desktop software—which would also warn users if they enter incomplete or invalid information. The public-facing website will also feature more advanced search and data-export functions than currently available.

Some are disappointed that the BOE will not have its new systems up and running for the 2016 election cycle, during which all of the state legislature is on the ballot again.

In response to multiple questions from audience members about whether or not campaign contributors will be assigned unique IDs in the system - which would allow users to see where else a donor has given, Connolly said that he doesn't foresee that being implemented. He pointed to the difficulties posed by misspelled names, different people with similar names, and inconsistent abbreviations. The new filing system will, however, feature autofill to help minimize those errors.

"Our goal is that we'd rather get you flawed data than no data," Connolly said.

Though the city CFB's filing system, C-SMART, was also created in the 1990s, it has since been updated to run on the web and includes many of the features that the state BOE is eyeing. As campaign staff enter contributor data, they receive prompts and warnings if entries are invalid, incomplete, or ineligible for CFB's public matching funds program. Addresses within New York City are checked against Department of City Planning records.

(The state is at the very beginning stages of toying with a similar public matching funds program, but even a pilot has struggled to get off the ground.)

CFB spokesperson Eric Friedman, assistant executive director for public affairs, said Friday that the board constantly improves its systems because it's required to do so after every election cycle. Some of CFB's upcoming developments Friedman mentioned will address a city law passed last year that requires independent committees to disclose donor information, showing which committees supported which candidates. 2013 was the first city election cycle in the post-Citizens United world, in which independent expenditures were a significant force in city campaigns. The CFB is making its updates leading up to the city's 2017 cycle, while also adapting to new legal requirements.

Other CFB developments are primarily aimed at simplifying and improving the reporting process for campaign staff. One tool, for example, would allow campaigns to directly transfer contributor data from online donations into C-SMART. "A lot of compliance logic is built into it," Friedman said. "So campaigns have a lot of data to ensure their data is compliant."

Still, officials from both boards said that some features requested by good-government groups, like unique contributor IDs and contributors' professional affiliations, will have to be first answered with legislation. And they added that while individual campaigns can and do correct contributor data, there is little that can be done on the software side to resolve issues like false or misspelled names and addresses.

"The requirements of what the contributor is required to disclose is a matter of statues," Douglas Kellner, co-chair of the state BOE, said in response to a question about obtaining more data on contributors, including voter registration status. "I don't think either the Campaign Finance Board or the State Board of Elections has authority to go beyond those disclosure requirements in their regulations."

"It's always going to be up to the candidate or the treasurer to update or modify their data," said Daniel Cho, director of candidate services at CFB.