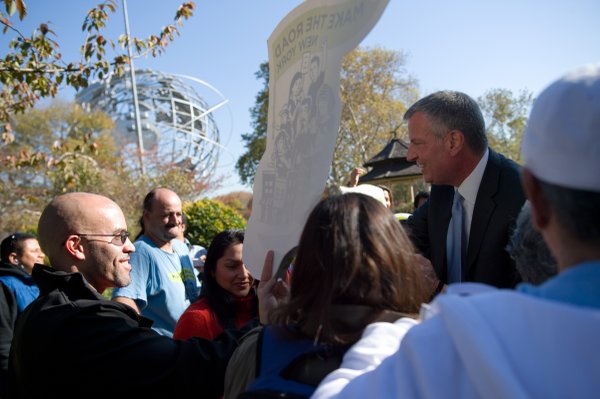 An overwhelming majority of the city’s community boards and four borough presidents have recently voted in opposition to the zoning proposals central to Mayor Bill de Blasio’s affordable housing plan, as least as they are currently written. The two plans - which would change the city’s zoning rules and hold a great deal at stake in terms of housing, retail space, parking, and the future of the city’s neighborhoods - continue to move through the public review process, with key hearings to be held in the coming months.

Mayor de Blasio has acknowledged that tweaks will be made before the zoning text amendments reach the City Council for a decisive vote early in 2016. De Blasio has repeatedly stressed that community board votes are advisory, though he has said that his administration is taking feedback into account. In a Wednesday interview with NY1, de Blasio said, “We’ve said all along we’re open to revisions. We’re obviously listening to the feedback from communities. And we’re open to making changes if we think it will help the plan.”

The final of the five borough boards, Staten Island’s, will vote on the plans Thursday, Dec. 10, and de Blasio’s Mandatory Inclusionary Housing and Zoning for Quality and Affordability will quickly move toward a public hearing held by the City Planning Commission on Dec. 16—less than three months after the public review process started in September.

The Dec. 16 hearing is expected to be long and contentious. The commission, which is made up of appointees by the mayor, the borough presidents, and the comptroller, will make changes it sees fit and send the plans to the City Council for its own public hearings.

Though some, including Bronx Borough President Ruben Diaz, have criticized the “speed of the process,” timelines are dictated by the city’s Uniform Land Use Review Procedure, which applies to everything from block-level land use changes to broad zoning law edits like MIH and ZQA. Future, neighborhood-specific development plans, like the already controversial East New York Community Plan, will be reviewed individually, though only by relevant community and borough boards, as well as the local City Council member.

The de Blasio administration argues that its MIH and ZQA plans are essential to lay new citywide groundwork on which the more localized community plans can be laid. The plans will set requirements for affordable housing in new real estate development; alter height limits for buildings; and make other changes to how land is used around the city.

ULURP allots 60 days to community board review and 30 days to borough president and borough board review. Neither groups hold decisionmaking authority, but comments are considered in the following City Planning Commission and City Council review stages.

Those two groups are the ones who decide on changes and ultimately vote to approve the zoning changes. De Blasio and City Council Speaker Melissa Mark-Viverito have acknowledged the significant opposition, and said last month that the plans will change before the council votes on them.

De Blasio, during a recent appearance on WNYC’s The Brian Lehrer Show, summarized the advisory role community and borough boards play in the process and his continued push for the plan.

“We try and learn from it, we try and make adjustments as we see fit. But it’s also a back-and-forth between our other partners in the process, notably the City Council,” he said. “A lot of what I’ve heard from this public discussion is the desire to maximize the number of affordable units and to have them at the lowest possible income levels. And those are goals we share. Trying to figure out how to construct it is the work we do together.”

Next Stop: City Planning Commission
The first opportunity for changes to be made comes during the City Planning Commission’s review process. After hosting its own public hearing on Dec. 16 and public deliberations in January, it is expected to tweak the plans as it sees fit and vote on MIH and ZQA in early February—in line with ULURP’s 60-day timeline for the commission’s stage.

Though CPC is inextricably tied to the Department of City Planning—the chair of the 13-person commission, Carl Weisbrod, is also the director of City Planning—it remains relatively independent of mayoral control. Six of the other 12 members are mayoral appointees, and because they serve staggered five-year terms, three joined during the Bloomberg administration (one has stepped down and the commission currently has 12 members). The borough presidents and the public advocate each appoint one of the other six commission members. Given these dynamics and the community response to MIH and ZQA, it is likely that changes to the plans will be recommended by the City Planning Commission.

Over the 60 days, CPC has the option of approving, modifying, or disapproving the proposals, taking into account recommendations from community boards, borough boards and borough presidents. MIH and ZQA will then move to the City Council.

The City Council
City Council members have had mixed reactions to the zoning proposals. Most say first and foremost that they agree with the broader goals of the mayor’s plans - creating affordable housing through new tools, including mandatory affordable units with any new development allowed through a rezoning.

“I do want to say the mayor’s proposal is very ambitious and...will probably be the most ambitious in the country,” said Queens Council Member Donovan Richards, chair of the subcommittee on zoning and franchises, during an October interview with Gotham Gazette. “But at the same time, we need to ensure that there’s real affordability in the plan and that things that communities have needed for a long time—whether it’s transportation, schools, jobs—all of the different components are also part of the conversation and part of the final deal as we move through the process.”

Under ULURP, the council has 50 days to hold hearings, review, and vote on the plans, passing through the Subcommittee on Zoning and Franchises and the Committee on Land Use before they go to the full Council. Any proposed changes return to the CPC for another 15 days of review.

Individual Neighborhood Plans
Since MIH and ZQA are citywide changes to zoning laws, they will not directly create any development. MIH, in particular, comes into effect when a developer requests to rezone a plot of land—only then will the development be required to include affordable housing (25-30% of the units, with rents based on certain income levels).

Such rezonings will also occur as part of neighborhood-specific “community plans,” which also include improvements to other local infrastructure. The first of these plans, in East New York, was released on Sept. 21 and is going through ULURP at the same time as MIH and ZQA. Six other neighborhoods across the other four boroughs are also being studied, part of a longer list of neighborhoods on the docket for overhaul.