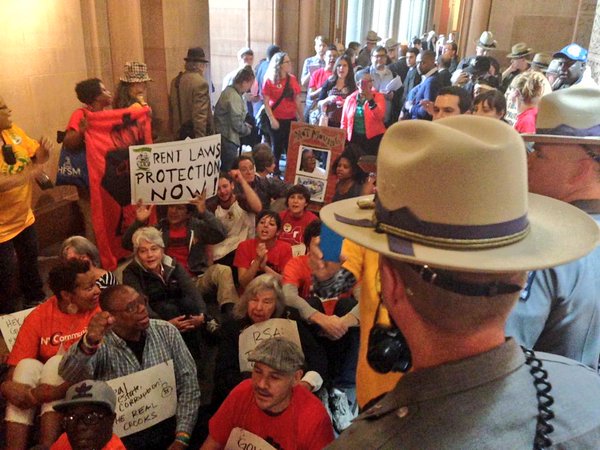 Tenants sit-in at the Albany capitol

"It's just surreal," said Jaron Benjamin a week after the conviction of former Assembly Speaker Sheldon Silver and on the day of closing arguments in the federal corruption case against former Senate Majority Leader Dean Skelos, knowing that those cases may have been bolstered by work he did years ago in the fight to strengthen the state's rent laws.

In the span of less than a year Benjamin went from issuing a report exposing the connections among the real estate industry, holes in New York's campaign finance laws, and major legislation to seeing his work used by the Moreland Commission, only to see Gov. Andrew Cuomo unceremoniously shutter the anti-corruption panel.

Then came the 2015 indictments of Silver and Skelos that many expected would scare Albany into enacting serious reform. But no transformative action has come, leaving Benjamin and other advocates to wonder what kind of impact their work actually had.

"There is still part of me that thinks surely the people charged with enforcing the laws must have known this type of activity was going on," said Benjamin referring to the SIlver and Skelos cases, especially in terms of the involvement of the real estate industry. "Seeing all of this play out has made me question what is pay-for-play and what is business as usual. It's all been blurred, and being involved in Moreland and the 421-a fight made me question what exactly is unethical and what's illegal."

In 2013 Benjamin was looking for a way to get people's attention. Then director of The Metropolitan Council on Housing, he needed a way to get regular New Yorkers interested in the backroom dealing that he saw as having continually allowed the real estate industry power to weaken rent laws every time they were up for renewal.

"We knew we had to start preparing then for the 2015 rent law renewal and I said, 'I want an issue that kind of encapsulates all the talking points, captures the outrage of big real estate's buying power in Albany, something that would rile people up,'" Benjamin told Gotham Gazette.

The report The Met Council released on June 5, 2013, focused on the influence of real estate moguls, like the now infamous Leonard Litwin, and their ability to flood politicians' campaign coffers with cash, subverting campaign finance limits by using the also infamous LLC loophole.

Three years later, looking back, some advocates feel that the report was a turning point for Albany. But things didn't change the way Benjamin and his allies might have expected.

After the report drew the interest of Moreland Commission staff in their investigation of legislative corruption that was later picked up by U.S. Attorney Preet Bharara, both former Assembly Speaker Sheldon Silver and former Majority Leader Dean Skelos were indicted on federal corruption charges brought by Bharara's office. The Met Council report and the federal charges exposed what many see as the undue influence of the real estate industry on New York State lawmakers and industry leaders' willingness to lavish lawmakers with cash legally and illegally to get what they want.

And yet, with Silver convicted and the Skelos case before a jury, the state legislature and Gov. Cuomo have yet to act to change the system. Cuomo has been the biggest beneficiary of Glenwood Management's largesse, with his campaign accounts receiving over $1 million in donations over the years through many LLCs. Glenwood also gave half a million dollars to Cuomo's Committee to Save New York.

In fact, even after Silver and Skelos were indicted and their relationships with Litwin's Glenwood Corp. revealed, Cuomo and new legislative leaders delivered a blow to tenant groups by enacting what many see as a real-estate-friendly renewal of the rent laws, deflecting pressure from advocates and Mayor Bill de Blasio.

Michael McKee, treasurer of Tenants PAC, who has been involved in fighting for stronger rent laws in Albany for decades, said he hopes the convictions jolt Albany into action, but he is dubious that it will happen because the indictments weren't exactly shocking to him. "We knew Shelly had sold us out; he sold us out three times," McKee said of Silver, who was touted by many others as the protector of all things progressive in the state legislature. "We knew Skelos was owned by real estate lock, stock, and barrel. We didn't know the details, but it wasn't a surprise."

Neither Benjamin nor McKee were surprised that Silver was receiving payments from Glenwood Management, or that members of Glenwood were helping Skelos' son land no-show jobs. The details were new to them, but the idea that legislative leadership and Glenwood were intimately connected was not at all revelatory. Neither was Skelos' declaration on a wiretapped phone call that he was weakening Senate Democrats by awarding Sen. Jeff Klein and the Independent Democratic Conference token power.

Despite his doubts about active efforts at change, McKee acknowledges that the Albany reform conversation has changed since the Silver and Skelos indictments. The LLC loophole is now a major issue, with increasing pressure from good government groups, newspaper editorial boards and reform-minded lawmakers - like state Senator Daniel Squadron, who, along with colleagues and other allies, just released a report on the loophole.

"It is very gratifying that people are paying attention now," said McKee (pictured below). "They ought to be properly shocked. It's just breathtaking, but some of this corruption is illegal and some of it is still perfectly legal." 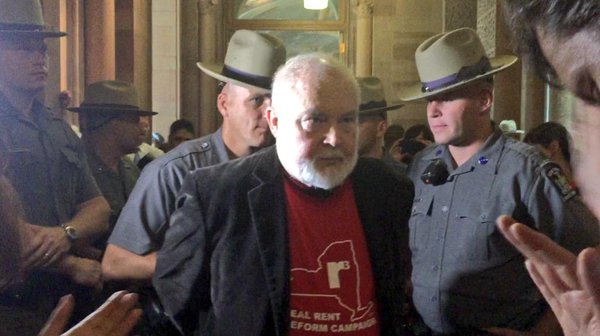 In June 2013 McKee and Benjamin weren't starry-eyed, but there was a feeling they might spur action in Albany. That month, Met Council released its report titled, "Tax Breaks For Millionaires: How the Campaign Finance System Failed New Yorkers and Helped Luxury Developers." That report examined how a small group of real estate interests used loopholes in the state's campaign finance law to funnel tremendous amounts of cash to politicians in exchange for support of the 421-a tax rebate program, which benefits developers of luxury apartment buildings.

The hope of all hopes was that perhaps public outrage would move lawmakers to close the LLC loophole, "maybe level the playing field so we would have a shot against the real estate industry. At the time we knew that Leonard Litwin was a poster child for the LLC loophole," Benjamin told Gotham Gazette.

Two years later Litwin's name would hang over Albany like a tropical depression, deals with Glenwood potential portals to the U.S. Attorney's office.

The report made waves, gaining the attention of the editorial pages of The New York Times and New York Daily News, and garnering support of liberal activist groups across the state.

Their hope for actual change was stoked when, in July of 2013, Cuomo empanelled The Moreland Commission to investigate public corruption. The commission held public hearings and appeared to be moving to a predetermined outcome. One day Benjamin was approached by commission staffers who wanted research information and addresses for real estate groups they planned to subpoena. "It really seemed like the Moreland staff took it seriously, but then the subpoenas got held back."

The Governor's Office put the brakes on those subpoenas, which may be an ongoing topic of federal investigation itself.

Benjamin's hopes were stoked again after U.S. Attorney Bharara took over the commission's files. "But there was no immediate action, so I thought 'OK, it was worth a try,'" Benjamin recalls.

Now VP of community mobilization at Housing Works, Benjamin watched as the indictments rolled in - indictments that were spurred in part by the very issues he tried to highlight in 2013. It wasn't the change he expected. "I would never celebrate someone else's misfortune, but I am enormously proud of the work I did at the Council and I do feel some of that work did help clean up Albany." 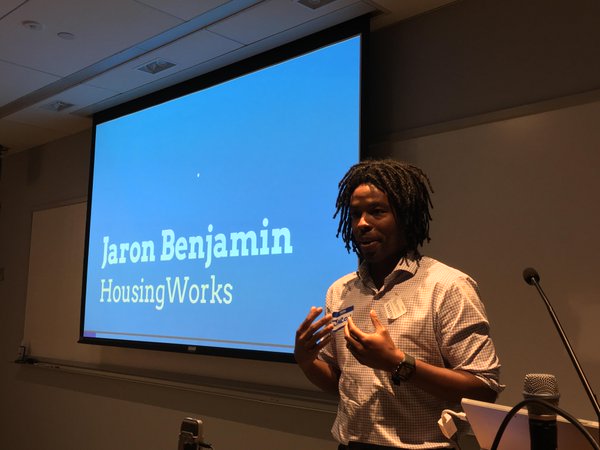 Benjamin (pictured above) says he sees indications that both new legislative leaders are more interested in listening to their members and willing to meet with groups that aren't the biggest donors. "It could be that they are both new, but it seems like they are both listening more and their doors are open," he said of Assembly Speaker Carl Heastie, a Democrat, and Senate Majority Leader John Flanagan, a Republican.

McKee isn't holding his breath for sweeping legislative reforms spurred by the Silver conviction and Skelos trial. "I wish I could say the crap that came out about Shelly and Skelos is enough to get the governor and legislature to do something real on election reform and ethics, but left to their own devices they are going to pass some Mickey-Mouse bill that tinkers around the edges," he said. McKee hopes public outrage will move the politicians to enact real reforms.

Years of frustration appear to have led McKee to conclude that tenants have one real shot left to influence policy in Albany, and that is the 2016 elections.

He told Gotham Gazette that he is dropping all of his lobbying commitments to focus on recruiting and promoting Democratic Senate candidates for 2016, despite disappointments he has had with Democrats in both the Assembly and Senate. He believes the presidential election year offers as ripe an opportunity as Democrats will ever get to seize the Senate, and after that it will be too late for the next rent-law renewal. "I consider next year do-or-die. If we don't do it now we won't do it two years later."