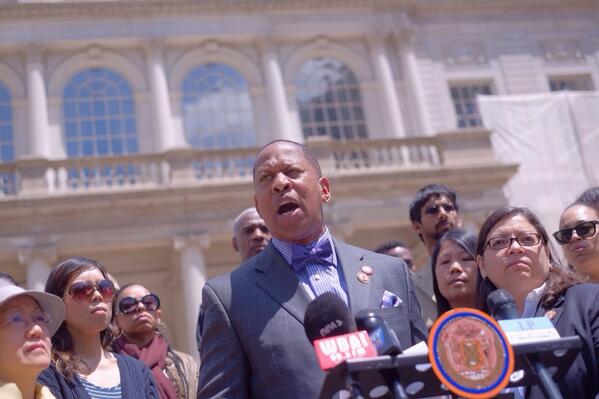 As the federal trials of Albany lawmakers further reveal the corrupting influence of money in politics and spending on the 2016 presidential race ramps up, New York City officials continue to refine local laws meant to limit the ways in which cash affects voting.

Already renowned for its campaign finance system that offers public matching funds for participation in a program with relatively low donation caps, the city is moving on reforms ahead of the next widespread municipal elections, set for 2017.

A package of eight bills introduced to the City Council in November seeks to strengthen the city's campaign finance laws and insulate elections from the consequences of the Supreme Court's Citizens United decision. While good government advocates approve of the package, they hoped for faster and more far-reaching change.

The bills "will protect New York City's landmark small-dollar matching campaign finance system from an onslaught of dark money and special interests in City elections," according to a statement from Council Member Andy King's office - King is the sponsor of one of the new bills.

The proposals would implement a number of recommendations made by the New York City Campaign Finance Board (CFB) in its 2013 post-election report. Of the CFB's 14 recommendations, two have already been made into law, strengthening disclosure of independent expenditures and banning certain anonymous campaign communications.

The current legislative package addresses eight additional CFB recommendations. Among the more significant of the proposals is a bill that would move the first payments of public funds to an earlier date, in June instead of August, to give candidates better footing ahead of the crucial primary campaign period.

Two bills fortify rules for entities that do business with the city, attempting to limit how much influence entities with business before the city can wield in elections. The first would preclude matching public funds for contributions bundled by individuals such as lobbyists who have business dealings with the city.

The second would improve disclosure by ensuring that companies that have an ownership interest in firms that work with the city are added to the "doing business database." Currently, the rule applies only to individual owners of businesses, and limits the contributions they can make. This bill would expand these limits to parent companies.

The other proposals in the package also address various technical aspects of elections such as voter guides, debate eligibility, and contributions from non-registered political committees.

"This package of bills increases protections against the impact of 'pay-to-play' contributions," said Eric Friedman, assistant executive director for public affairs, New York City Campaign Finance Board. Friedman said the matching funds program has been a success for more than 25 years and is regarded as a national model because "it has been adapted to meet the challenges of the evolving political system." He said these bills would make the system simpler for candidates and also more transparent for the public.

Strengths of the city's campaign finance laws are also, in part, weaknesses. The system can involve onerous paperwork, said Prudence Katze, research and policy manager at Common Cause New York, a good government organization. "It would be great to see a streamlined way of distributing money to make it less onerous for candidate committees as well as provide more transparency for the CFB and the public," she said.

Katze approves of the direction the Council is taking and thinks that these proposals will help clarify rules around campaign contributions. But she is skeptical of how quickly the Council can act on them.

"Just because bills are introduced doesn't mean laws are going to be passed," she said. "It remains to be seen."

She also hopes to see some technological rather than legislative fixes that would encourage campaigns to comply with the laws. For instance, charge cards that allow campaigns to disburse and easily track expenditure of public funds.

CFB's Friedman said they were already looking at measures, including something similar to Katze's proposal, to make it easier for candidates to navigate the system and for the public to dig into spending data. He even mentioned a system to help candidates process credit card contributions that would be rolled out soon.

Rachael Fauss, director of Public Policy at Citizens Union, another government watchdog, said the administrative reforms proposed in this package are important for a more efficient system and that it responds to changing political dynamics. However, she believes that the issue of independent expenditure has not been fully addressed. "We got disclosure laws before 2013 and we know how much was spent in the last elections," she said, "and to not acknowledge that misses an opportunity."

Citizens Union advocates for increases in candidate campaign spending caps and public matching caps as a measure to balance the scales against independent outside expenditures. Fauss said this is a complicated political issue. "Council members might not want to do this because it looks like it benefits themselves," she said, although hoping that there would be discussions on the issue led by the Council.

"These proposals make good common sense and they're important but they're missing one big piece. We know what the problem is and we need to look at solutions," she said.

Friedman agreed that independent spending was a significant issue in the 2013 elections and would have to be watched closely in 2017. "Going forward, we want candidates to continue to feel that the public matching funds program provides them the ability to run a campaign," he said, agreeing that an increase in spending and matching caps was one way to accomplish this in light of growing spending by entities other than candidate campaigns. On the other hand, he said it could also lead to the argument that more money was being brought into the election. "It's a conversation we need to have because outside spending isn't going away," he said.

Council Member Kallos also supports increasing public matching funds, but in order to minimize the role of large individual contributions. "Currently, even after candidates receive full matching funds, they are only 64 percent of the way to the spending cap, and we often see the remaining 36 percent of funds coming from large contributions," he said.

"The spending cap gives upstart candidates a chance against campaigns that can raise a lot of money from large contributions," Kallos added. "As the CFB's report showed, independent expenditures have not been winning campaigns, and strengthened disclosure from legislation passed by Council Member Brad Lander through the Government Operations Committee should serve to further limit their effectiveness."

The New York Public Interest Research Group came out in favor of all the proposals put forward. Senior attorney Gene Russianoff said one bill, which would ban public matching funds for bundlers who work with the city, is a particularly important one. "They made a mistake not amending the law in 2009," he said, referring to the last time the city passed significant changes to campaign finance law. "Now I think they're making up for it."

But Russianoff is disappointed with the Council's time frame. If signed into law, the bills will go into effect for the 2017 election cycle, but the longer it takes to enact new rules, the more time bundlers, contributors, and spenders have to play by the current ones.

"One of the problems is that time is running out and reforms that wouldn't have been so controversial in the past become complicated," Russianoff said. According to him, reform efforts are usually "on the defensive" either in a post-election climate or in the run up to the next election. "Our biggest argument to the [City Council] Speaker and her staff was, 'it's now or never.'" By 2017, he believes that "influence peddlers" will have ample time to get their work done, finding loopholes to have their contributions grandfathered in, among other means.

Russianoff also mentioned that the texts for all the bills state January 1, 2016 as the date they will go into effect - a timeframe virtually unmeetable at this point. The governmental operations committee held its last hearing of the year on Monday, Dec. 14, and the legislative package was not on the agenda. The bills will be heard at a committee hearing "early next year," according to Council Member Kallos, after which they may be tweaked before a committee vote, then a full Council vote, and on to the Mayor's desk for signature.

Council Member Lander believes that "New York City campaign finance rules are a total pain in the ass and totally necessary for democracy." Lander is a passionate supporter of stronger campaign finance regulation and was a prime sponsor on one of the two bills based on CFB recommendations that became law. He has also signed on to all the proposals in the new package.

Lander wishes independent expenditures could be banned, which could only happen if the Supreme Court's Citizens United decision is made void through a constitutional amendment. (Currently, 16 state legislatures across the country have called for a constitutional amendment through resolutions and signed letters. With the signature of only one more state senator, New York will be the 17th state to do so.)

"Till then, we're stuck with putting lipstick on a pig," Lander said. He said the package of legislation would help, in particular the bill related to bundled contributions, which would level the playing field for candidates opposed by heavy independent spending.

In terms of making the system less complicated for candidates, the CFB employs staff and holds information sessions to walk campaigns through the process. "We can't require less compliance but we can make it as positive to comply as we can," Lander said, acknowledging the complicated nature of the system. He is confident that the current proposals will move through the council "fast enough."

Council Member Kallos shares this optimism. "I imagine my colleagues in the Council have an interest to hear the voice of the people," he said, "over the voices of special interests."