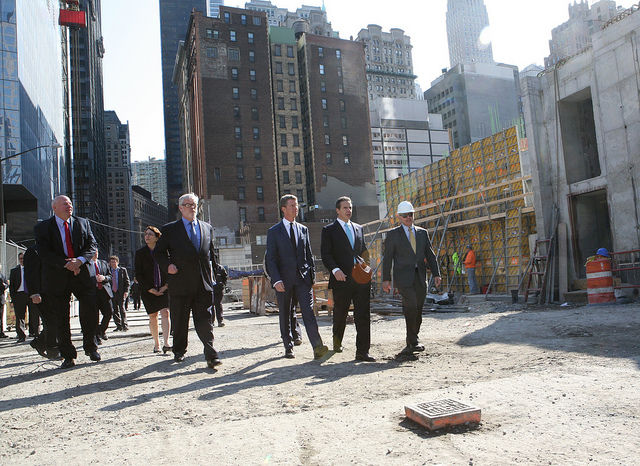 It appears that labor leaders and real estate developers are at an impasse in their negotiations of an extension for a controversial tax abatement program meant to encourage affordable housing. Known as 421-a, the program gives real estate developers significant property tax breaks for building affordable housing as part of otherwise market-rate buildings. State lawmakers decided in June to leave the future of the expiring program contingent upon an agreement between labor and business.

Sources close to negotiations characterized discussions as "dead," adding that the Real Estate Board of New York was "unhappy" with the direction of negotiations with the construction workers union. Others told Gotham Gazette that there hasn't been any movement for some time, while other key stakeholders appeared not to have thought or heard anything about the status of negotiations in weeks.

However, spokespeople for John Banks, head of the Real Estate Board of New York, and Gary LaBarbera, head of the Building and Construction Trades Council of Greater New York, told Gotham Gazette that negotiations continue.

"These are ongoing, good faith, negotiations and we are not going to discuss them publicly," said Jamie McShane, of REBNY, by email. "The negotiations mark a great opportunity to engage in frank and honest discussions about how we can build much more affordable housing, ensure construction workers are treated fairly and create job opportunities for residents of the city."

LaBarbera, issued a similar statement: "We continue to meet with REBNY representatives and are hopeful we will reach an agreement on an extension of the 421-a program in the weeks ahead which provides workers with good wages and benefits and needed affordable housing across New York City."

Both groups say they are working toward a deal by the January 15 deadline. It is unclear whether Gov. Andrew Cuomo's office is involved in mediating negotiations - Cuomo helped spearhead the deal that left extension of 421-a, a government tax and housing policy, up to private parties. The Cuomo administration did not return request for comment.

The 421-a exemption is a favorite of the development industry that has been applied liberally but enforced loosely. It is also seen as essential to building affordable housing in New York City, especially in most desirable neighborhoods.

When 421-a was expiring in June, Cuomo and legislative leaders agreed on a compromise. The deal temporarily extended the program, to the end of the year, while setting up tighter requirements for the affordability component but leaving the future more precarious. Seemingly spurred by concerns that federal prosecutors were watching closely, legislators left it up to labor unions and real estate representatives to negotiate the final, crucial aspect of the deal: the prevailing wage component. Allowing labor unions and the real estate industry to decide legislative policy has been questioned by a number of tenant and good government groups, as well as people in government.

In announcing the major aspects of an end-of-session deal on June 25, Cuomo's office outlined the 421-a extension: "The legislation extends the 421-a program for six months, with a provision that allows representatives of labor and industry groups to reach a memorandum of understanding regarding wage protections for construction workers. If such an agreement is reached, the program will automatically be extended for four years."

Sen Liz Krueger, Democratic member of the Senate Committee on Housing, Construction and Community Development, told Gotham Gazette that she has been informed that negotiations are on the rocks. Krueger has been against putting 421-a negotiations in the hands of real estate and labor. "I've heard through the grapevine that negotiations aren't going well and, OK, that says to me that the program comes to an end," said Krueger. "I believe that it is inappropriate for groups that benefit from a tax break to be in charge of negotiating it."

Having control over the tax breaks, which can be worth millions of dollars, and the jobs created by construction is a major motivator for real estate and labor but many speculate that developers would be more willing to walk away from the negotiating table if labor demands for worker pay eats too far into their bottom line. There are also questions about how easily LaBarbera is able to negotiate with one voice on behalf of the various unions within his larger organization.

Though an agreement may be on the verge of alluding stakeholders, there is more time till the deadline, and deals do tend to get reached at the eleventh hour.

One party certainly paying close attention, if not working to influence negotiations, is the administration of Mayor Bill de Blasio, whose affordable housing goals rest, in part, on 421-a-related development.

"We fought hard to secure a program that eliminated tax breaks for luxury condos, doubled affordable housing production, and slashed subsidies per apartment by a third," said Wiley Norvell, a spokesperson for the mayor. "Against some strong political headwinds, we got these reforms passed. The rest is in the hands of the parties that officials in Albany chose to hammer out final program details."

In Fiscal Year 2015, 421-a accounted for more than $1.1 billion in government tax expenditures.

Yet, a recent ProPublica investigation of 421-a found "The failure of city and state regulators to effectively police the tax break at the heart of such deals and hold developers to their word."

This discrepancy is something de Blasio and his team have vowed to change and are working with state partners to correct. It is also part of the impetus for changes in the policy that Norvell alluded to.

When developers apply for and receive the tax abatement, they do not have to pay property taxes for three years during construction, after which their exemption lasts decades in exchange for keeping some units in their new buildings under rental affordability caps. It is part of the state tax code, but applies to New York City development and is overseen by the city Department of Housing Preservation and Development.

Though he has decried how it has been applied and enforced in the past, Mayor Bill de Blasio wants to see 421-a extended, and his ambitious affordable housing plans include units accrued through the program. In the spring, de Blasio offered his own 421-a reform plan, which he got real estate buy-in for, but was rejected by Cuomo, who insisted in more protections for labor. The deal reached by Cuomo and legislative leaders was actually very similar to de Blasio's proposal, but was indeed more favorable for the construction unions - if they could reach a compromise with real estate leaders, of course.

"The story of 421-a has been told," said Krueger. "We don't get the bang for our buck; It has been abused; the real estate industry has learned how to avoid delivering affordable housing and it drives up land prices, which is not helpful in New York City."

Vicki Been, head of de Blasio's housing department, said in November that the administration hoped a deal on 421-a would be reached, but that the city and the administration's affordable housing plans would survive even without one.

"Life will go on," Been said during an event at New York Law School. "There was life before 421-a, and there will be life if 421-a fails. We will survive and still deliver our 200,000 units," Been said, referring to the administration's ten-year goal of preserving or building 200,000 affordable units. Still, Been indicated she would like to see 421-a extended and that, in a newly strengthened form, it would be helpful in achieving the administration's goals.

If no deal is reached, there may be several fingers pointing at Cuomo for abdicating responsibility. Meanwhile, enough 421-a funded affordable housing is in the pipeline already that an expired program later renewed sometime in 2016 may not cause too many problems for affordable housing development in the city. Some have expressed concern, though, about the ability of nonprofit affordable housing builders to survive without 421-a; and those builders are not necessarily well-represented by REBNY.

Krueger said that she would be happy to negotiate an all new affordable housing program that takes into account the lessons learned from 421-a. She'd like to have a public debate with all the stakeholders involved. However, she fears if a deal with REBNY and labor fails to materialize, a replacement might be negotiated behind closed doors at the last minute in the state budget--specifically the funding bill that is usually presented to legislators and voted on after all the other budget bills.

"I believe now is the right time to negotiate a bill with all the facts on the table," said Krueger.