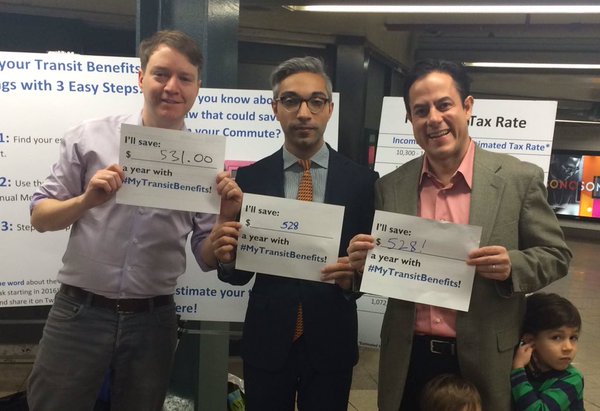 Almost half a million New Yorkers will be able to save upwards of $400 a year on their public transportation expenses after a new Commuter Benefits Law goes into effect January 1. The law expands pre-tax transit benefits to more New Yorkers by requiring businesses with 20 or more full-time employees working in New York City to offer the program.

Over “450,000 New Yorkers who do not have access to the tax benefits today because it is not being offered to them” will benefit from the law, City Council Member Dan Garodnick, who sponsored the bill, told Gotham Gazette. Commuters who buy a 30-day Metrocard every month will save about $443 a year, according to a report by the Riders Alliance, a grassroots campaign that helped to get the commuter benefits law passed.

A monthly card currently costs $116 every 30 days for unlimited rides on the city’s subways and buses; totaling about $1400 per year. The transit benefit can be used for additional transportation options, though, it is not limited to the MTA. Eligible commuters will be able to access several options through their employers depending on the transit they use.

The law is roundly viewed “as a win-win for employees and employers,” Julie Menin, Commissioner of New York City’s Department of Consumer Affairs (DCA) told Gotham Gazette, as it “allows employers to save on their payroll taxes, and also saves employees a significant amount” by allowing them to use their pre-tax income to pay for transportation expenses. DCA will oversee implementation of the commuter benefits law and is administering a marketing campaign so that workers and employers know about its start date.

Employers can save more than $100 per year per employee in tax liability, so the more employees who sign up for transportation benefits, the more the employer can save, according to DCA.

“We designed this to be applicable only to businesses of a certain size, which are most likely to already have the ability to process employee benefits,” Garodnick said. “We also recognize that when you take pre-tax dollars off of the payroll it reduces a company’s own tax burden. So it becomes a positive for them too. I think it is a very minimal obligation on businesses.”

The law also comes with some safeguards for businesses, including a six-month grace period to implement the law, meaning employers will not be subject to penalties until after July 1, 2016. If employers have not complied with the law by July 1, they have an opportunity to do so within 90 days. After that, DCA will impose penalties for those not complying.

Additionally, if businesses can prove that complying with the Commuter Benefits Law would significantly harm the business’ finances, the business can qualify for a financial hardship exemption, excusing them from complying with the law. In that case, employees of such companies would simply be out of luck when it comes to accessing transit benefits.

The new law will not “cost [businesses] money - it’s just an administrative cost,” Nicole Gelinas, senior fellow at the Manhattan Institute, told Gotham Gazette. “You have this cost taken out of your paycheck before you pay your taxes, it does save the employees a bit of money and it encourages transit.”

“I think employers have too many mandates,” Gelinas said, “but, considering that larger employers are already paying a benefits administrator, in terms of mandates, this is not that onerous and it saves money…a lot of employers want to offer this anyway because it’s good for morale.”

Gardonick, Menin, and Gelinas all say they have not heard any criticisms of the law, which will make more employers take advantage of an existing federal tax benefit that allows businesses to offer its workers $130 a month of pre-tax income for transportation.

Wil Fisher, a Rider’s Alliance member, told Gotham Gazette his employer already offered the commuter benefits program. “In addition to helping folks, it’s very easy to deal with, the way it’s set up with my employers. You just sign up once and it’s there - it’s like a pay raise I don’t even have to think about.”

“I’m saving about $500 a year, it’s been a very clear help to me,” said Fisher, who joined Garodnick and the Riders Alliance at Union Square on Sunday, Dec. 13 to promote the program. The Riders Alliance set up a big pink calculator in Union Square which passersby could use to estimate their transit savings (a calculator is also available online).

The law allows full-time employees to use pre-tax income to pay for certain commuting expenses up to the maximum amount permitted under federal law. As a part of the massive federal spending bill passed by Congress Friday morning, the maximum amount will be raised to $255 per month, up from $130, meaning employees can spend $255 worth of untaxed earnings to purchase qualified transit expenses, including subways, light rails, trains (including Amtrak), buses (including coach buses and Greyhound), ferries, and vanpools. The benefit will come in various forms depending on the type of transit a commuter uses - some will be able to obtain their monthly MTA passes through the program using pre-tax money, others will receive a card with money on it that can be used to purchase certain transportation.

Commuters who spend $130 or less per month on transportation expenses will get the same amount of savings under the new federal law as they previously did. New Yorkers who take more costly modes of transportation to and from work, such as express buses or commuter rails, will benefit from the federal increase.

As Gelinas indicated, besides saving New Yorkers money, the commuter benefits law has other positive effects. “It promotes mass transit use,” Menin also said, which can cut down on carbon emissions. And, it helps offset MTA fare hikes that hit commuters every two years.

In that case, because only businesses with 20 or more employees are required to offer the benefits, some half a million New Yorkers will still be left without access to transit benefits after the commuter benefits law goes into effect. However, those employees are still eligible to participate in the commuter benefits program, and can still ask their employer to set up the transit benefit for them.

Organizations with 20 employees or fewer may refuse, as the law does not require them to offer the benefits, in which case those employees would not have access to the same transit savings as others.