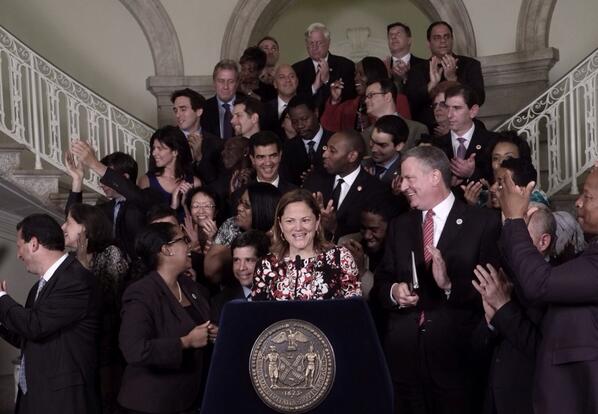 A commission tasked with reviewing the compensation levels of New York City’s elected officials released its report Monday recommending at least a 12 percent salary increase for all elected officials, with a 15 percent increase for the Mayor. Taking multiple factors into account, a 23 percent salary increase was recommended for City Council members, yet that increase should be contingent upon reforms to the position, according to the panel.

The report has been submitted to Mayor Bill de Blasio, who now has 30 days to submit to the City Council his recommendations to approve, disapprove, or modify the findings of the commission. Then, the City Council will vote on any new salaries before they head back to the mayor to be approved into law. The city’s elected officials have not received a pay raise since 2006 - this includes the citywide offices of mayor, public advocate, and comptroller; the five borough presidents, five district attorneys, and 51 City Council members.

“Regardless of the report's recommendation,” Mayor de Blasio said in a statement, “I will not accept a raise this term.” The mayor commended the three-member commission, which he established as called for by law, for its dedication and “extraordinary effort,” and added, “I look forward to carefully reviewing the report, and providing my full response by January 13th, as required.”

“Our recommendations are that 1) Council membership should be classified as a full-time job as it is for all other City elected officials; and 2) Extra pay for doing part of the job (i.e., lulus) should be eliminated,” the commission stated in its report, using “lulus” as parlance for payments for chairing Council committees. “The two recommendations are logically linked. Being a Council member already is, and should be formally recognized as, a full-time job. Because it is a full-time job it is anomalous to pay extra for doing part of the job...Eliminating lulus and formally classifying the job of Council member as full time would both also enhance the reputation and status of the Council.”

Dick Dadey, executive director of Citizens Union and one of a small number of people to testify in front of the pay commission at its two public hearings, said in a statement to Gotham Gazette, "The commission's report is a commendable treatise on city official compensation and we support its recommendation to make any pay raise for the Council tied to the elimination of committee stipends.”

The commission proposed that the “$447,000 now budgeted each year for all lulus” should be folded “evenly into the salary for each non-Speaker seat on the City Council,” which “would result in each non-Speaker seat receiving an additional $8,940 on top of the 12 percent base increase for all elected officials,” and the three percent increase to account for the growth of Council members’ responsibilities.

The commission recommended increasing the salary of the City Council Speaker to $154,375, reflecting the inclusion of the $25,000 lulu the speaker position comes with into the base salary.

In a statement, City Council Speaker Melissa Mark-Viverito said, "The Council will be reviewing the recommendations. We thank the commission for its work."

“Today,” the commission’s report reads, “47 of the 50 Council members are entitled to receive lulus. (Of the 47, 11 decline the payment)...Today, only a few Council members have an outside job such as practicing law. The overwhelming majority already work full time.”

Regarding the recommendation that the position of Council member be classified as full time, Citizens Union said in a statement, “this would not establish a specific cap on outside earned income. This change, however, could have the effect of limiting such outside income.”

Susan Lerner, executive director of Common Cause/NY, issued a statement praising the commission’s work, saying, “Common Cause/NY supports the Quadrennial Advisory Commission's recommendations to fully professionalize the City Council. Making pay raises a condition of eliminating outside income and most importantly, lulus, is a key measure to make the Council more efficient. With 37 committees and 6 subcommittees nearly everyone in the 51-member body is eligible for some kind of cash bonus, which seems principally designed to boost their base pay.”

The 2015 Quadrennial Advisory Commission was appointed by Mayor de Blasio in a move required by law in September (still, de Blasio took his time doing so, which came on the heels of Mayor Bloomberg refusing to do so, thus the lack of raises since 2006). The three-member body was chaired by Frederick A.O. Schwarz Jr. and included Commissioners Jill Bright and Paul Quintero.

According to the commission, its exhaustive 169-page report took a data-driven approach to its process and issued recommendations that took into account “the current role of each office, relevant changes in elected offices, changes in indices of New York City’s affordability, and the relationship between pay of elected officials and the economic condition of their constituents.”

Though good government groups have expressed approval of the commission’s recommendations, given that the City Council will ultimately vote on these salary increases, an ethical issue remains. Dadey wants to see the Council follow Mayor de Blasio’s lead, saying, “Citizens Union urges the Council to avoid the conflict of interest that exists if they raise their salaries during this current term. We ask the Council to delay all raises until the start of the following term, beginning in 2018.”

Another item Citizens Union is calling for added action on is that the City Council “increase transparency around council members’ earned outside income by requiring that financial disclosure forms be available online for independent analysis.”

Overall, the raises were generally lower than what some city officials had asked for. Manhattan Borough President Gale Brewer - the only elected official who appeared to testify in front of the commission (something noted by the commission in its report) - argued for a 15 percent increase for all offices in her testimony. Brewer, a former Council member, also supports eliminating lulus and making salary increases prospective. In November, the city’s five district attorneys sent a letter to the commission requesting a 32 percent salary increase. The Daily News reported that a handful of Council members had discreetly supported a 71 percent increase in November - something Speaker Mark-Viverito called “ridiculous."

Mark-Viverito did submit a letter to the commission saying Council members deserved a raise, though she did not specify an amount.

In the interest of giving greater transparency to the process, the 2015 commission has made the research and public testimony it evaluated to arrive at its recommendations publically available. This included looking at how elected officials are compensated in other big cities.

“Citizens Union will do a full review of the report's recommendations and issue its full analysis when the Council holds its public hearing,” Dadey said, looking ahead to the new year and continuation of the process.