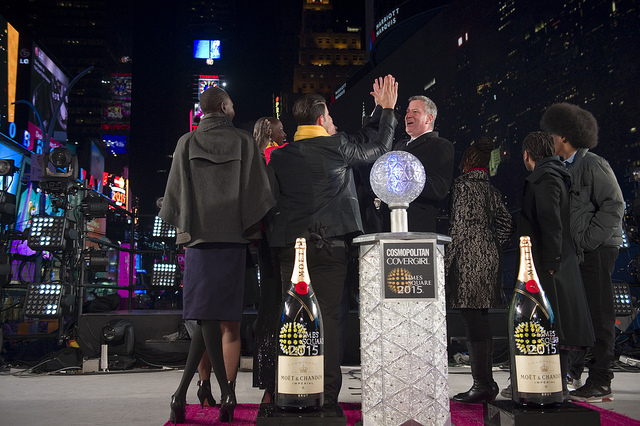 As we usually do about this time of year, Gotham Gazette asked New York politicos to look into their crystal balls for predictions for the year ahead. Below you'll find insights from elected officials, journalists, advocates, analysts, and others who are tuned in to New York politics.

Looking back at last year's predictions for this year, some of our forecasters did quite well (see Nicole Gelinas, Ruben Diaz Jr., Alexis Grenell); while others missed the mark (see Eric Adams, Sal Albanese, Bob Gangi). Gelinas predicted that the Central Park carriage horses would not be out of a job, and was right; Diaz Jr. predicted that new Bronx Metro North stations would get funded, and was right; and Grenell predicted that 9 out of 10 Women's Equality Act planks would get passed in a compromise, and was right. Meanwhile, Adams predicted Brooklyn winning the 2016 DNC and hosting a Pope Francis mass; Albanese predicted Bill Bratton would be out as NYPD commissioner; and Gangi predicted the mayor would end broken windows policing - none of which came true.

See a new round of political predictions, these for 2016, below.

***Have something to add to the conversation? Tweet us @GothamGazette. And, be sure to read the latest reporting from Gotham Gazette; including our look back at The Top Ten Stories of 2015 in New York Politics and much more.***

PREDICTIONS for 2016 in NEW YORK POLITICS:

Kathryn Wylde, president & CEO, Partnership for New York City
The City Council will rise to the occasion and pass the Mayor's Mandatory Inclusionary and Quality Affordable Housing Zoning Amendments, but the 421a incentives needed to complete the city's production goals will get kicked back to the legislature, and no one can predict how that ends up.

Nicole Gelinas, Manhattan Institute
The horse carriages and their customers will be ringing into 2017.

City Council Member Mark Levine
Mayor de Blasio will reverse his previous policy position and decide to see Star Wars Force Awakens. He will like it so much that he orders a pilot program exploring NYPD use of light sabers.

Staten Island Borough President James Oddo, via his end of year message
2016 will bring a new economic development campaign to entice businesses who are being priced out of other boroughs to think of Staten Island instead of New Jersey.

Jeff Smith, New School urban policy professor and author of Mr. Smith Goes to Prison
Because of a split in the Latino community, Rangel's seat will continue to be represented by an African-American - likely Keith Wright.

Jeff Foreman, director of policy, Care for the Homeless
Governor Cuomo uses his State of the State address in January to agree to and promote the NY/NY4 Supportive Housing plan, agreeing to NYC's 15,000 units and matching Mayor de Blasio with 15,000 units for NYC and another 5,000 units elsewhere in the state, but sets it as a 10-year - not a 15-year - program.

Nick Powell, opinions editor and columnist, City & State NY
Continuing their destructive feud, Cuomo (and, by extension, the Legislature) will deny de Blasio mayoral control of schools. Part of a calculated play that will end with Cuomo getting behind a rival Democrat for the New York City mayoralty in 2017.

Evan Siegfried, Republican strategist and president of Somm Consulting
Cuomo will decide to personally primary de Blasio in 2017, but launch his campaign in 2016 because it would be too much fun not to.

Ted Hamm, chair of journalism and new media studies, St. Joseph's College, Brooklyn
The investigation of the Eric Garner case will continue throughout most of 2016. Commissioner Bratton will continue to maintain that he's waiting for the DOJ to finish its inquiry before the department can start its six-month long disciplinary hearing. In the meantime, Officer Daniel Pantaleo will continue to collect his paycheck.

Joe Bello, Navy veteran and veterans advocate
The de Blasio administration will struggle to make "functional zero" for homeless veterans and right before his State of the City, Governor Cuomo will come through with real estate developers that will help house the remaining veterans, stealing Mayor de Blasio's thunder once again.

Mike Okhravi, CEO of DocChat
Health care across the state will continue to become more unaffordable for New Yorkers, as New York's DSRIP will not positively impact providers or patients.

Andrew Berman, executive director, Greenwich Village Society for Historical Preservation
In 2016, Mayor de Blasio will stop blocking sensible community rezoning plans that incentivize or require affordable housing while maintaining a reasonable scale of development in areas like University Place and Chinatown. Instead of taking the current path with the deeply unpopular 'Zoning for Quality and Affordability' and 'Mandatory Inclusionary Housing,' the Mayor will come up with individually tailored and narrowly focused changes to the city's zoning...In general the Mayor will realize that he can't truly address affordability issues and the needs of average New Yorkers while continuing to try to please the real estate developers who have so generously supported his campaign. Or, I predict 2017 won't be a very good year for the Mayor.

Contact us anytime by tweeting @GothamGazette; you can email editor Ben Max at This email address is being protected from spambots. You need JavaScript enabled to view it.; and don't forget to sign up for our newsletters if you haven't yet or to spread the word to friends and colleagues if you have!