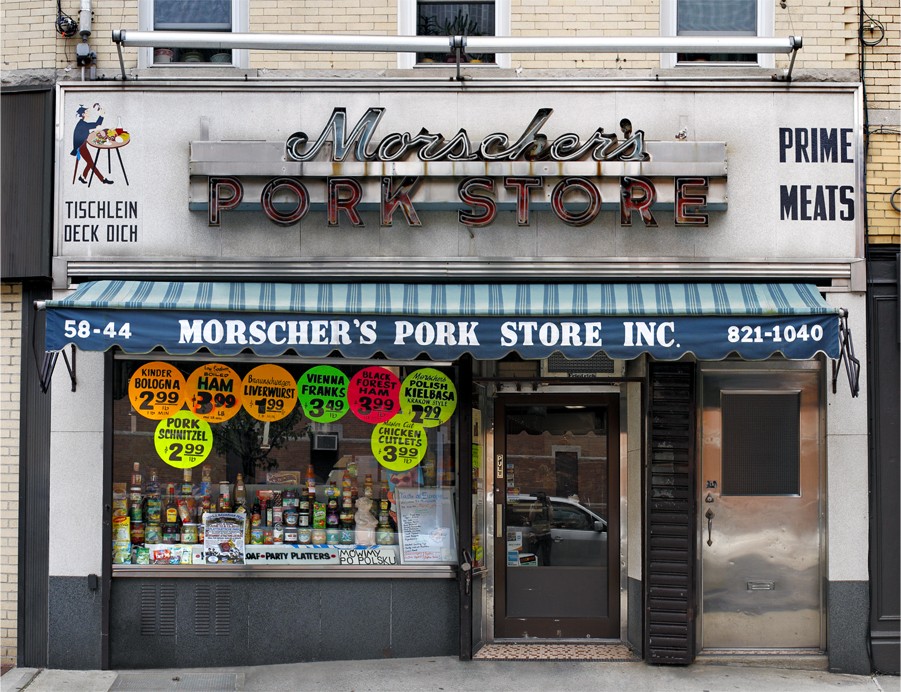 As the mayor‘s recently proposed, and in many cases fiercely opposed, zoning text amendments have fanned the flames of New Yorkers‘ ever-simmering fear of gentrification, one type of at-risk tenant has gone unmentioned: small business owners.

Whether it is the famous Arepa Lady of Queens who cooks up corn pancakes with mozzarella, the baby Jesus doll boutique showcased in Frederick Wiseman‘s recent film “In Jackson Heights,” or the local bodega still selling expired $1 honey-buns, locally-owned and servicing mom-and-pop boutiques provide much of the diverse commercial life that has long characterized New York City.

As the de Blasio administration looks to change zoning requirements throughout the city, including to allow more and better retail space, and wants to see significant real estate development to increase affordable housing, there is a great deal at stake for small business owners - both current and prospective.

“Small business are critical to the vitality of the community,” Rachel Meltzer, an assistant professor of urban policy at the New School’s Milano School, told Gotham Gazette. “In economics terms there are ‘positive spillovers’ in a community from having operating, lively, and functional business, but there are also benefits that extend beyond just what it means for that owner.”

With the city economy and population booming and neighborhoods changing, it is increasingly difficult for small businesses to survive. There is little city policy dedicated to protecting these institutions of community character from the ruthless churn of the New York real estate market.

“There really is no [preservation strategy] that I know of, and I do research in this area.” said Meltzer about small businesses.

Benjamin Dulchin, executive director of Association for Neighborhood and Housing Development (ANHD, an equitable development advocacy group), told Gotham Gazette that in one sense, this is understandable.

“Rent stabilization,” he explained, “exists because there‘s a sense that [residential] tenants are uniquely vulnerable because the stability of your home is a tremendously important thing and it is uniquely necessary for family and neighborhood stability...It’s a different thing between a landlord and a business.”

On the other hand, Dulchin says, “part of what we like about our neighborhoods are small- to medium-size indigenous businesses” and “as a neighborhood gentrifies, as rents go up, you see displacement pressure not just on the current residents, you also see lots of stores finding it very hard to hang on...I don‘t think the city has figured out what an effective tool for addressing that would be.”

With gentrification on the move in all five boroughs and the de Blasio administration looking to change the rules of the game while also spurring more development, there’s no clear indication about what may be done to protect existing small businesses in the next hot neighborhoods.

Meltzer suggests a place to start might be expanding various zoning initiatives designed to support small business and stymy the invasion of national corporations. She listed legislation from the Upper West Side, where former City Council Member Gale Brewer (now Manhattan Borough President) passed storefront width restricts to stop the spread of banks, as an example. So far this measure has been successful.

De Blasio’s Zoning for Quality and Affordability proposal (one of the two zoning plans, along with Mandatory Inclusionary Housing) includes allowing for taller first-floor retail space in mixed-use development, but proponents note that the new allowances would still be unconducive to bigger chain stores.

Meanwhile, this past summer residents of the Lower East Side proposed a type of zoning amendment already enacted in San Francisco that would cap the number of chain stores allowed in the neighborhood.

Meltzer also mentioned “productive zoning” as a potential tool, which instead of mandating spatial inputs like height limitations and store width, focuses on the outputs of the space - meaning what, generally speaking, the space will be used for. This way zoning can mandate retail space goes towards meeting certain communal needs, as opposed to merely stipulating what types of stores cannot be there through measurements.

The legal limitations of what zoning can achieve are unclear, though, according to Meltzer. “I’m not sure to what extent you can say ‘you have to put this type of business here with this kind of owner,’” she said. “I am not a lawyer.”

The ZQA text amendment, which is currently under City Planning Commission review and will soon move to the City Council, has some version of each of Meltzer‘s suggestions. City Planning told Gotham Gazette that the retail space permitted by ZQA is not suitable for big box retail (although Target started a program to get around this) and that in certain locations the city‘s FRESH program, which incentivizes supermarket development in health-deficient neighborhoods, will help fill the space.

The lack of protective zoning for the small business entrepreneurs of the city, Meltzer says, is only indicative of a larger void in the government‘s supportive framework for those individuals and enterprises. The “institutional arrangement and responsibilities” fall short, she says.

To fill the gap, Meltzer argues the government could create some type of bureaucratic infrastructure for retail space oversight - an entity that would have responsibilities comparable to that of the Department of Housing Preservation and Development, but for retail space. Such a body could supply subsidies to businesses when it made sense and assure the spaces these businesses occupied were not being exploited by landlords hungry for profit.

“HPD is really sophisticated and experienced in regulating housing and thinking about ways to preserve it,” she said. “There have been a lot of affordable housing developments that in the past have tried to be very conscientious about the retail that goes into those projects, but the success has been limited partially because the subsidy for housing is separate from the commercial subsidy. So when [the government says to the developer], ‘we will give you x dollars per unit,‘ that doesn’t include commercial space. There is no way to say ‘this is what the market is asking, we want a certain type of business that may not be able to pay that, so we will give a subsidy to fill that gap.’ There is not anything, at least that is coming out of the City, that does that in a large scale way like HPD or HDC does with housing.”

Meltzer went on to say that if the city did try something like that, the small business services agency could be the one to oversee it, but none of this is part of the equation right now.

Whether or not subsidizing commercial space, like HPD does residential, is even a good idea is up for debate. Meltzer said herself that she was “not prepared to argue that we should be subsidizing commercial rent,“ but went on to say that such a practice could prove a powerful tool in supporting businesses in rapidly gentrifying neighborhoods, adding “I think it‘s the government’s responsibility to support these businesses to try to stay in business.”

However, businesses should only receive subsidies, Meltzer says, if they show adequate interest in adjusting to the changing climate of the neighborhood. There‘s no point in financing an owner who wants to run their business the same regardless of environment.

Supporting businesses in transitioning neighborhoods is where existing services provided by the Department of Small Business Services (SBS) can be of use. In a response to an inquiry from Gotham Gazette, an SBS spokesperson said the agency was working to roll out programs targeting these businesses and listed business education and assistance, along with tools to help businesses navigate leases and the retail market as examples.

SBS also pointed Gotham Gazette to two other programs geared toward supporting the city’s less powerful retail operations: NYC Business Solutions, which, among other things, provides businesses with free financial assistance, recruitment and training services, and referrals to pro-bono legal services, and Small Business First, a program aiming to consolidate small business resources and requirements currently spread across 15 different city agencies into one portal. (Unfortunately, NextCity reported in September that there has been little progress since the program launched in February.)

Mayor de Blasio has dramatically cut fines imposed on small businesses across the city and worked, through SBS, to expand opportunities for immigrant entrepreneurs. The administration got a recent boost for its zoning proposals when a dozen ethnic and local business groups, including the Brooklyn Chamber of Commerce, endorsed the plans, as reported by the Daily News. The proposals are being considered by the City Planning Commission before it sends recommendations to the City Council for consideration.

Over the past couple of years there has also been clamor about commercial tenant protection, as landlords have been accused of dumping their property taxes onto small business owners and multiplying rents by four or five upon lease expiration. City Council Member Robert Cornegy, head of the Council’s small business committee, introduced legislation in July along with Council Member Mark Levine aimed at curbing harassment, but their bill has not moved.

Many small business advocates point to the Small Business Jobs Survival Act (SBJSA), which gives tenants a prodigious amount of lease negotiating power and has been floating around the City Council in various iterations for around 30 years, as the holy grail of business preservation.

Manhattan Borough President Gale Brewer, who helped craft the bill while working for Ruth Messinger in the ‘80s, says SBJSA is misguided. Among other critiques, Brewers insists the law would make the lease negotiation process inefficient and there are “serious” doubts as to the bill‘s legality. She plans to propose a more moderate plan with Cornegy in the near future.

Ultimately, Meltzer thinks tenant protection and lease renewal negotiation reform are “great,” but that the best hope for strong, long-lasting mom-and-pop commercial retail space stands in how the city negotiates with developers looking to build.

“What we want to think about are the best points of leverage, which are new development,” Meltzer says. “Even in housing, you cannot do that much with existing orders. When a building gets built and the developers are trying to secure zoning and subsidies, those are the moments when the city can say ‘oh, OK, you want the rights from us? Here’s what you are going to have to do in order to build bigger.’“

Commenting on the zoning proposals currently up for review, Meltzer said, “It would be interesting to know if in the zoning, because it is not finalized by any means, [the city] would start to incorporate things like that.“