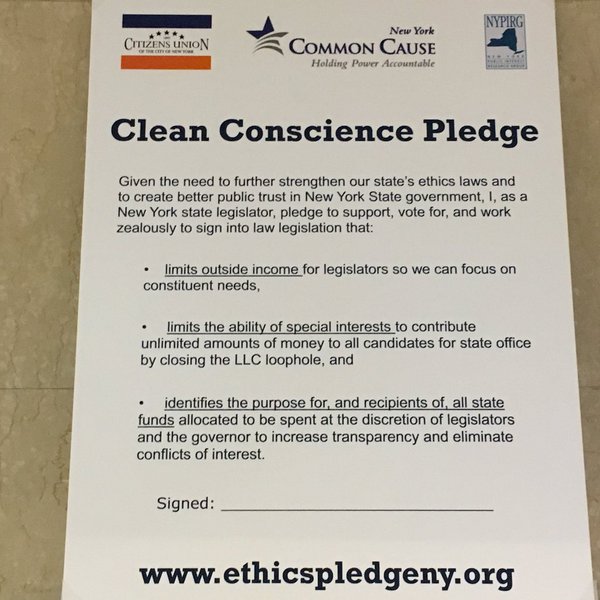 The pledge (photo via @CitizensUnionNY)

Lawmakers returned to Albany for the first day of the 2016 legislative session in the wake of two seismic corruption convictions of their former house leaders. Waiting for them were representatives of three leading good government groups, asking New York state legislators to sign a pledge to fight for good government reform.

On the first day of session since both former Assembly Speaker Sheldon Silver and Senate Majority Leader Dean Skelos were convicted on multiple federal corruption charges, good government groups unveiled a pledge asking legislators to "support, vote for, and work zealously to sign into law legislation that:" closes the LLC loophole, bans or reduces outside legislators' income, and requires transparency for all discretionary funds in the state budget.

Citizens Union, Common Cause, and the New York Public Interest Research Group revealed the "Clean Conscious Pledge" just as lawmakers were scurrying to chambers for roll call and to hear their leaders set the year's agenda. The groups hope the pledge will demonstrate that rank-and-file members support major ethics overhaul in the wake of the Silver and Skelos convictions.

So far the website hosting the pledge lists three initial signers among the 200-plus members of the Senate and Assembly: Sen. Michael Gianaris and Assemblymembers Felix Ortiz and David Buchwald.

"New Yorkers send elected officials to Albany to solve problems, not create them," said Blair Horner of NYPIRG in a statement. "This pledge is the first step in showing New Yorkers that the state's elected leadership is serious about ending Albany's ethics crisis. It's time for the governor and legislators to solve this problem."

Reform was clearly on the mind of many legislators returning to the capital, but the heads of both legislative bodies approached the issue in strikingly different ways Wednesday. Both Assembly Speaker Carl Heastie, a Democrat, and Senate Majority Leader Flanagan, a Republican, did begin by addressing the issue of ethics reform, touting reforms made to outside income disclosure laws last year. Then they both were quick to blame the other house for inaction. Heastie noted that the Assembly "took action on a series of proposals that were unfortunately not adopted by the state Senate."

One of those actions was passing a bill to close the LLC loophole that allows businesses to create multiple fronts to get around campaign donation limits.

Meanwhile, Flanagan pointed out that the Senate passed a pension forfeiture bill it had reached a deal on with the Assembly only to have the Assembly back out at the last minute because of concerns about how it would affect union members. The bill is aimed at ensuring that legislators convicted of public corruption are not able to collect a government pension - something both Silver and Skelos are in line to do.

Heastie mentioned in his remarks that he would like to try to reach a new agreement on the issue. Both Skelos and Silver are set to take home sizeable pensions despite their convictions.

But that is where the similarities between their comments ended. "Make no mistake – over the coming weeks, discussions around proposals on ethics will be a priority of this house. The Assembly is serious about ethics reform and we know that words are not enough," Heastie told the chamber.

Flanagan, on the other hand, downplayed future action on ethics and told the chamber that if legislators did their jobs and served their constituents, "things will take care of themselves." Flanagan then went on to list a number of notable attractions in districts across the state, like zoos and parks, and said that legislators must be proud of their districts.

The comments left many legislators scratching their heads.

"Senator Flanagan didn't have much to say about the needed changes Senate Democrats have been talking about to restore the public's faith in us and address these massive scandals," said state Sen. Liz Krueger. "He basically said we already did what needed to be done and said how great it was and then listed places in people's districts. I don't think I heard anything on how he wants to address ethics."

In her remarks on the Senate floor Wednesday, Democratic Minority Leader Andrea Stewart-Cousins called for ethics reform and restoring trust in elected officials - as did Assembly Minority Leader Brian Kolb, a Republican.

Assemblymember David Buchwald, a Democrat, became the first legislator to sign the good government groups' pledge. Buchwald issued a statement touting his commitment. "I am proud to be the first state legislator to take this meaningful pledge to restore integrity and the public's trust in state government," said Buchwald. "It is incumbent upon legislators to work to significantly reduce corruption, and we can do so by passing these common sense measures. I think the vast majority of New Yorkers would want to see their representatives sign this pledge."

A number of other legislators said they had yet to see the pledge with the chaos of the first day of session but said they planned to consider it.

Krueger, who said she supports the efforts of the good government groups, said that she had yet to see the pledge and was cautious to lend her support without seeing all of the details. When read the gist of the pledge Krueger was favorable. "It's important to me how the pledge is written," said Krueger, "I'm hesitant to sign a pledge committing to do something I can't control."

Legislative leaders are waiting to see exactly how far Cuomo will push on ethics - he has said he'll be outlining a major reform plan at the top of this State of the State and budget address on Jan.13.

Krueger said it is now incumbent on Cuomo and the public to make it clear to legislative leaders that massive reform is needed. "This is about how hard the governor pushes and how loud the public screams," she said.