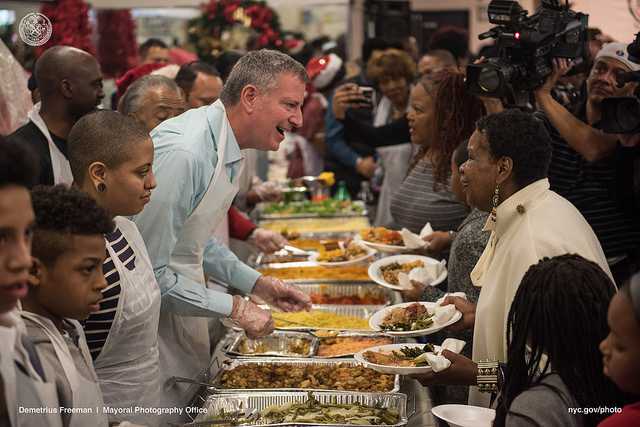 The City Council’s Committee on General Welfare will hold an oversight hearing on hunger in New York City on Wednesday morning at City Hall.

Council Member Stephen Levin, the chair of the general welfare committee, told Gotham Gazette he and his colleagues want to get a broad assessment of hunger in the city, as well as specifics related to de Blasio administration efforts to mitigate the problem, which is the result, in large part, of high poverty rates.

At the hearing, Levin added, the committee would review increasing and decreasing barriers to the federally funded Supplemental Nutritional Assistance Program (otherwise known as SNAP or “food stamps”), SNAP enrollment, the status of food pantries, state hunger programs, and other components.

“We want to hear what initiatives this administration is taking,” Levin said. “We’re eager to hear what recommendations they’re able to put forward and hear...what they’re working on.”

Still, hunger remains a harsh reality for many New Yorkers.

As of last November, HRA was providing nutritional assistance to 1,686,941 New Yorkers, 45,406 fewer than a year before. In addition to the food stamps, one in five New Yorkers are assisted by the Food Bank of New York City, the major hunger relief organization that receives funding from the city, which reported in a recent survey of its agencies “that they had run out of food, or particular types of food, needed to make adequate meals or pantry bags” last September.

Continuing a decline that began under Mayor Michael Bloomberg, SNAP participation in the city has gone down under de Blasio. According to New York City Coalition Against Hunger executive director Joel Berg, a main cause of the decline is federal divestment of half a billion dollars in New York City SNAP funds.

“The amount of the benefits decreased and the caseloads decreased,” said Berg, who estimates that about 500,000 New Yorkers are eligible for nutritional assistance but don't receive it. “And so, there’s no question that lower benefit levels do also reduce participation.”

Lisa Levy, Coalition Against Hunger’s director of policy, advocacy and organizing, will testify at Wednesday’s hearing on behalf of the organization, Berg said.

Because SNAP is federally funded, the City Council is limited in actions it can take on nutritional assistance policy. “We have been investing more resources in food pantries through the Food Bank of New York City,” Council Member Ritchie Torres, a member of the general welfare committee, told Gotham Gazette. “But as with many issues, we are hamstrung by a Congress in Washington that is disinvesting, ever more deeply, in the city.”

Though New York City’s employment has recovered from the recession, Berg insists that this has not translated to reduced hunger. “The lines of pantries and kitchens are still as long as ever,” he said.

According to research from Coalition Against Hunger, many food insecure New Yorkers do indeed work. The group found that between 2012-2014, 48 percent of food insecure New Yorkers between the ages of 15 and 65 worked. While significant minimum wage raises being pushed by Gov. Andrew Cuomo, Mayor Bill de Blasio, and others would likely reduce that number if enacted, there could be an unintended consequence of the wage hike for New Yorkers receiving nutritional assistance.

Berg, while praising the wage hikes, does worry that, “In some cases, particularly with single people, the amount of SNAP benefits they lose could exceed the value of the wage increase,” said Berg, who has advocated for raising the income level needed to receive food stamps to expand eligibility.

Council Member Levin indicated that he would look into the wage hike issue. “It’s hard to kind of predict, and I think you’d have to kind of drill down on the individual case and really that individual and that family’s situation,” he said. “But certainly, it’s something that we should be asking about.”