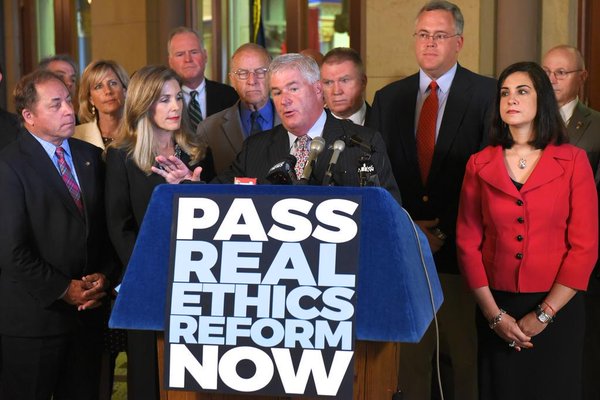 A majority of Democrats in the New York State Assembly voted down a series of 13 rules changes proposed by their Republican counterparts designed to make the chamber more equitable and allow members of the minority to get their bills to a vote.

While a push for rules changes led by Republican Assembly Minority Leader Brian Kolb and their defeat by Assembly Democrats has become an annual Albany tradition, this year the focus on reform is at a peak thanks to the federal convictions of former legislative leaders Dean Skelos and Sheldon Silver.

Assembly Speaker Carl Heastie, who became the chamber's leader after Silver's indictment, convened a working group on operations, participation, and transparency last year to come up with a series of recommendations to make the chamber more open to its members and the public. However, the group has been criticized for not holding any public hearings, neglecting to include Assembly Republicans, and failing to keep up with its own deadlines.

Assemblymember Brian Kavanagh, one of the group's co-chairs, told Gotham Gazette that he expects he and his colleagues will reveal proposals shortly and that they will "touch on" a lot of the Republicans' concerns.

"The working group is putting together a broad set of proposals that we hope to make soon and I expect them to include a wide range of reforms that will touch on what Republicans have proposed," Kavanagh said. "They haven't proposed anything new. We are aware of the proposed changes Republicans want to make in this house."

Assembly Republicans also advocated for a package of bills that would create eight-year term-limits for legislative leaders, shut down legislators' campaign accounts if they are convicted of a felony, and do away with the much-criticized Joint Commission on Public Ethics.

The Assembly Majority has had preliminary discussions about banning outside income, but Heastie has indicated those conversations are in very early stages. Both the Assembly and Senate majorities are expected to have a larger conversation about reform after Cuomo unveils highly-anticipated ethics reforms in his State of the State address. While Democrats hold power in the Assembly, Republicans control the Senate, albeit by a much slimmer margin.

During a Tuesday morning press conference touting the reforms, Kolb appealed directly to the man responsible for securing the indictments of Skelos and Silver, U.S. Attorney Preet Bharara. "You all read recently that the federal prosecutor has spent a little time in Kentucky talking about ethics," Kolb said. "I think we should invite Mr. Bharara or somebody like him to talk to the New York State Legislature about ethics and corruption."

Kolb said he wanted to send a message to Bharara that some action is being taken to fight the status quo. He said he wants to see the end of the "three men in a room" system whereby the governor and majority leaders of each house decide the budget and most other pieces of legislation without much outside input. Kolb pointed out that two of the three men from recent years are no longer in office, given the indictments of Silver and Skelos.

Bharara has taken to criticizing the situation in Albany and has repeatedly told the public to "stay tuned" regarding new investigations and indictments of state politicians. "There are by my count 213 men and women in the state legislature, and yet it is common knowledge that only three men essentially wield all the power," Bharara said after the arrest of Silver last January. "I must confess a little bit of confusion about this: When did this come to pass? Why has everyone just come to accept it?"

Assembly Republicans proposed a number of reforms that are considered worthwhile by a host of good government groups. The 13 proposed changes included making public the process of selecting a speaker, allowing members to bring one substantive bill to the floor during their two-year term regardless of its support, requiring committee meetings to be webcast and roll call votes recorded, imposing eight-year term limits on committee chairs, and requiring equal funding for each legislator's' office.

John Kaehny of Reinvent Albany told Gotham Gazette that Assembly Republicans failed to reach out to good government groups for their support. "So how serious was this?" asked Kaehny, adding that he would be happy to support "serious recommendations."

Heastie was asked about the progress of the working group last week on The Capitol Pressroom with Susan Arbetter and he responded by asking for patience, saying that the group was finalizing recommendations and still having discussions with members. "I want the message to be that we are open to all kinds of ideas surrounding transparency," Heastie added.

Arbetter then asked Heastie for his thoughts on Assemblymember Jim Tedisco's "Spirit of 76" legislation that would allow a bill to come to a vote if it has the support of 76 members (a majority of the 150-seat Assembly), no matter their party.

"The party in the minority always finds a way to dilute the power of the majority," Heastie responded, "but our kind of government is a majority rules system."

"The working group is looking for ways to have more transparency, to not have bills bottled up, to come up with ways to make things a little smoother," Heastie told Arbetter. "There are a mountain of things new members feel is a challenge. But in all fairness the workgroup is not looking to undo the majority rule the way we have in our government."

Senate Republicans passed a bill on Tuesday that sets term limits for leadership positions. It is not expected to pass in the Assembly. Kolb told reporters before the rules vote that he would not act unilaterally and term-limit himself if Assembly Democrats failed to pass such a measure.

Assemblymember Steve McLaughlin, of the Capital Region, scolded Assembly Democrats Tuesday, saying, "Thirteen times this body could have voted to reform the way we do business and thirteen times you voted no."