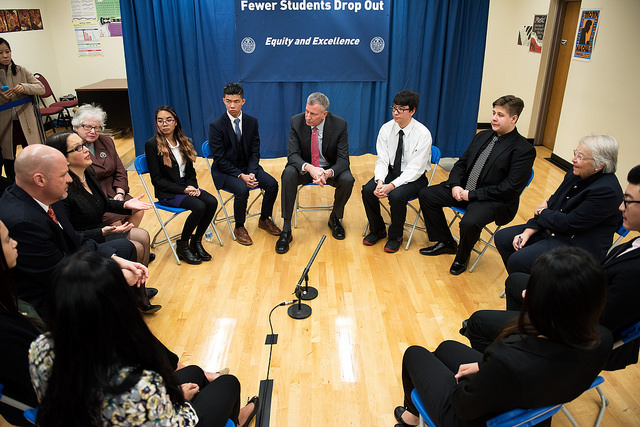 Once Mayor Bill de Blasio unveils his preliminary budget for 2017 on Thursday, Jan. 21, the City Council will begin to hold hearings and formulate its response. In conversations with Gotham Gazette, City Council members Julissa Ferreras-Copeland, chair of the finance committee, and Daniel Dromm, education committee chair, said that one of their top priorities during budget season will be addressing school overcrowding through the Department of Education’s capital spending plan.

Capital spending allows for the expansion and rehabilitation of existing schools and the building of new schools.

Each year, the DOE five-year Capital Plan is meant to be included in the mayor’s executive budget, updated in the November financial plan, and then amended through a public review process for inclusion in the next budget. This review process lends the plan transparency as the DOE and School Construction Authority consult with Community Education Councils, Community Boards, City Council borough delegations, and other elected officials. The plan is again updated and typically released in February for approval by the Panel for Education Policy. The PEP then forwards it to the Mayor and City Council.

In the last two years, the process has been significantly off schedule. Last year, the DOE Capital Plan Amendment was delayed till May 2015 to align it with the city’s 10-year capital plan. The amendment proposed a $13.5 billion five-year DOE Capital Plan for 2015-2019, up from $12 billion the previous year. As a result of the delay, there was no update in November.

The amendment will now be introduced along with the preliminary budget on Thursday, OMB spokesperson Amy Spitalnick confirmed.

“It’s disappointing that this is the second year that (the capital plan) hasn’t come out on time,” said Council Member Dromm. “I’m hoping that it will be out shortly. We need time to look at it and examine it.”

“It’s overdue, it’s late,” Ferreras-Copeland said of the plan. When the Council does get it, she said she will work closely with Dromm to appeal for an additional $1 billion to address the issue of overcrowding.

The DOE capital plan estimates that adding around 38,000 seats would help alleviate the problem, but critics say that number is too low. A June 2014 report by Class Size Matters, a nonprofit that advocates for smaller class sizes, estimated the shortage of seats at around 100,000 (Dromm believes it’s more likely between 50,000 and 75,000).

“If you look at all the development going on in the city, particularly the mayor’s plan to add 200,000 affordable housing units, then there’s a dire need for additional seats,” Dromm said. He wants most of the new money in the capital plan put towards building new schools rather than refurbishing existing ones. “We need physical seats. We need brick-and-mortar buildings to be built,” he said.

Class Size Matters’ executive director, Leonie Haimson, doubts that the update to the capital plan will be good enough, even if it is better. She called for doubling the number of seats from the last plan and investing $125 million each year from the city coffers, which would be matched by state funds. She was also critical of the DOE’s slow movement on the plan, which is now already in its second year and unapproved.

“We should have more time, not less time to analyze the plan considering the failures of the DOE in the past,” she said. “There needs to be more public process and more genuine interest on the part of the DOE to listen to people.”

Besides a greater investment in the capital plan, Class Size Matters also advocates for an independent commission to improve planning and efficiency in siting new schools.

“The mayor’s made a big push towards increasing pre-K and housing but paid very little attention to where those kids are going to go to school,” Haimson said. “I don’t think you can create good neighborhoods without schools. We’re the richest city in the richest country in the world and we have severe school overcrowding and waiting lists for kindergarten.”

[Related: What To Watch For As City Budget Season Begins]