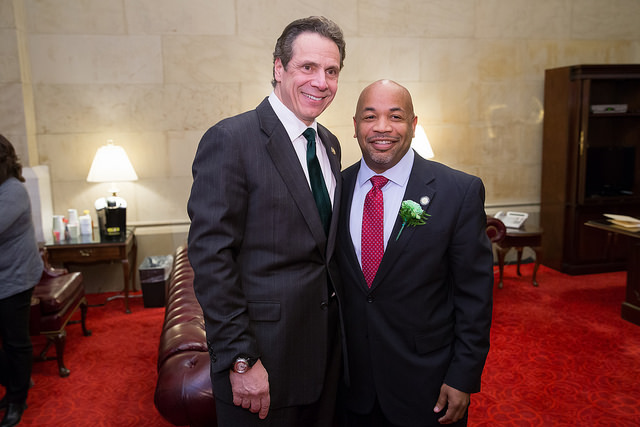 Assembly Speaker Carl Heastie's Twitter account lit up Tuesday with a stream of "fun facts" about income inequality and his proposed millionaire's tax just a day after Gov. Andrew Cuomo dismissed the plan.

"I don't believe there's any reason or appetite to take up taxes this year," Cuomo told reporters on Monday, responding to questions about the taxation agenda put forth by the Democratic Assembly majority on Feb. 2, which calls for increasing taxes on the state's highest earners.

Heastie's tweet storm appeared to be a rebuke to Cuomo, though it did not mention the governor by name.

A few hours after Heastie's tweets stopped, the Working Families Party issued its own retort. "We need our tax system to put working families first, not hedge funds and wealthy campaign donors. That's what both Democratic presidential candidates have been calling for, and it's what New Yorkers expect from our elected officials in Albany too," said WFP New York State Director Bill Lipton in a statement.

Heastie surprised some when he proposed expanding and extending the state's millionaire's tax that isn't set to expire until 2017. Assembly Democrats' plan would create a number of higher tax brackets with those who earn from $1 million to $5 million a year paying the state's current highest rate of 8.82 percent. Those earning from $5 to $10 million annually would pay 9.32 percent and those making over $10 million would pay 9.82 percent.

The increase for millionaires would be paired with a middle-class tax cut. And according to Heastie the income generated by new tax brackets would add funding to education, infrastructure repair, and "other priorities."

Many see Heastie's plan as a way to strengthen his position as leader, cater to major interest groups that back his conference, and give him a popular proposal to use during budget negotiations.

Republican Senate Majority Leader John Flanagan has said that higher taxes would drive millionaires out of the state. "We don't support raising taxes," replied Scott Reif, spokesperson for the Senate Republican Conference when asked for a comment on Heastie's tweets.

A spokesperon for Gov. Cuomo, Rich Azzopardi, said by email that "What the public is hungry for, post Shelly Silver, is ethics reform -- specifically the pension forfeiture bill that was agreed to last year and promptly reneged on by the assembly. We hope they will join us this year and pass this and the other important reforms the Governor outlined."

Heastie's office did not reply to inquiries about whether Heastie was the author of the tweets. As the day progressed, Heastie's spokesperon, Mike Whyland, also took to Twitter on the subject, and more directly criticized the governor.

The speaker's earlier messages had a distinctly populist tone:

E.J. McMahon, director of the fiscally conservative Empire Center, quickly responded to Heastie on Twitter, questioning the data Heastie cited and combatting the notion he said Heastie was propagating that millionaires don't pay anything.

"The whole premise that they are not paying their fair share is nonsense," McMahon told Gotham Gazette of millionaires and taxes. "There is no standard in existence under which they don't pay a major share of their income. Eighty percent of filers in New York pay 15 percent of the taxes collected."

"The premise of these tweets is unsupported by facts," McMahon continued. "They aren't tweeting 'Hey, we need money and here is the best way to get it.' The whole point of these tweets seems to be to make someone who doesn't know better think millionaires aren't paying anything and that just isn't true."

"You can see the people who support this and are retweeting Heastie are the people tied to the education lobby who think taxes can never be high enough," said McMahon.

Michael Kink, director of Strong Economy for All, a labor-backed progressive group falling into the category mentioned by McMahon, praised Heastie's proposal and said that it is about funding schools as well as having enough funding for other major proposals and needs.

Kink and his allies appear ready to hammer Gov. Cuomo on recent infrastructure problems such as a water main break in Troy that shut off water to at least two towns and the environmental disaster in Hoosick where it was found that toxic chemicals had poisoned the public water supply. Cuomo has recently tried to downplay the Hoosick issue.

"Assembly members have sat in day-long hearings about the budget and heard parents and students testify they need school funding, heard businesses say they support the $15 minimum wage but need some help so it doesn't overburden them; they know about the water line explosion in Troy and not too far away they've seen families drinking poisoned water coming out of a source that should have been overseen by an agency that is suffering under the governor's austerity budget," Kink told Gotham Gazette. "If the state wants to meet these significant needs it is entirely responsible to have a strong funding mechanism."

Kink said that the tenor of the presidential race shows that the electorate is in a populist mood. "I think these will be an interesting set of budget negotiations because the Assembly is more in tune with the populist mood than Flanagan or the austerity version of Governor Cuomo," Kink said.

The idea that there are 'two versions' of Cuomo have supporters of the tax plan ready to campaign hard for it as they've seen Cuomo flip on proposals after gauging voter sentiment. It was only last year that Cuomo said a $13 minimum wage was a non-starter and there was "no appetite" for paid family leave. Now the Governor has made a $15 minimum wage and paid family leave top priorities, expressing strong personal connections to both issues.

McMahon notes that Cuomo actually changed his position on the millionaire's tax in 2011. "He pivoted in 2011 on this issue. So nothing he says is frankly dispositive that this tax will be part of the budget," said McMahon. "The fact [the governor] does things like this encourages them to keep pushing."

Karen Scharff of Citizen Action NY, a grassroots progressive group that supports Heastie's plan, said she certainly won't be writing off the plan until the budget is actually decided on, since negotiations tend to lead to surprising results, no matter what any stakeholder has said. "This is the right time for this plan because one, the wealthiest New Yorkers are wealthier than ever, and, at the same time, the state has desperate needs that have to be funded. Every year things in the budget are up in the air until negotiations are over. And they aren't over."

Note: this story has been updated with comment from the governor's spokesperson and news of social media response from Heastie's spokesperson.