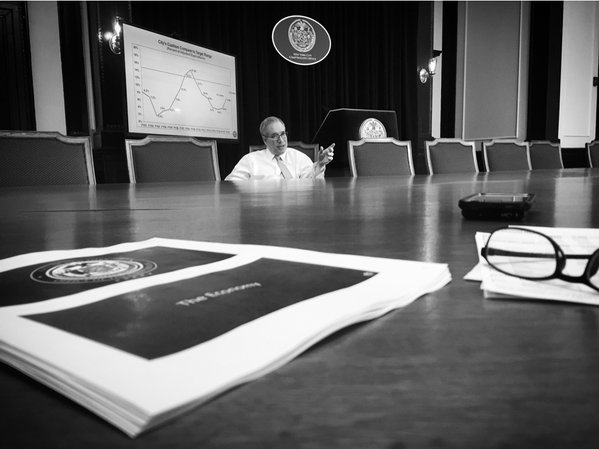 Speaking to members of the media assembled in a conference room at his Manhattan offices, Stringer said that the "budget cushion," or savings, that de Blasio has allocated is insufficient to properly prepare for an economic downturn and explained that his office foresees larger budget gaps in the coming years than the mayor's plan outlines.

Looking at the New York City economy and the larger fiscal picture around it, Stringer struck a tone similar to de Blasio's during the mayor's recent presentation of an $82 billion spending plan. Both Stringer and de Blasio point to concerning volatility on Wall Street and in China. "The storm clouds are gathering," Stringer said Wednesday, but "we do not expect a downturn in the near future."

On a theme that both the mayor and comptroller strike regularly, Stringer also showed Wednesday that while the ongoing recovery from the Great Recession has generally benefited the city and its budget, "not all New Yorkers have shared equally in those gains." In fact, he said, that was far from being the case.

Unemployment continues to drop across New York City but "real wages for low-income employees have declined by more than 3 percent," Stringer said. More and more jobs are good, but actual earnings are not keeping up for all workers.

While many of these sentiments echoed de Blasio budget statements over the past two years, Stringer did point to a few specifics in de Blasio's budgeting as problematic. Before going into those concerns, Stringer did praise additional de Blasio spending on increasing the minimum wage for city employees and human services workers the city contracts with and investments in mental health services, education, and supportive housing.

Stringer reiterated his call to help reduce budget deficits at the city's public housing authority by funneling millions of dollars in "excess funds" from the Battery Park City Authority to NYCHA, which has $17 billion in capital needs. The mayor has thus far resisted this call.

As he moved toward criticism of the de Blasio administration, Stringer said the city is now committing $1.7 billion on homeless services across three agencies, a 46 percent increase over two years under this mayor. The comptroller said the city must get a return on this investment and that his office will continue its aggressive audits and investigations. "Money's not the issue," he said, "it's more coordination, management."

Asked to respond to Stringer's analysis, a spokesperson for the mayor, Amy Spitalnick, wrote that the administration is "immediately and aggressively tackling this issue with the most comprehensive effort in the country to prevent homelessness and move people out of shelter and into permanent homes."

Citing a homelessness problem "created by years of disinvestment," Spitalnick said that "political grandstanding won't solve the crisis for families around the city. It takes sustained resources and smart management to address it, and that's exactly what this administration is doing – and a comprehensive review is underway to further improve these vital efforts."

The comptroller also pointed to the need for the city to get uniformed worker overtime expenditures under control, noting that the city is projected to exceed the NYPD overtime cap agreed to as part of the deal adding about 2,000 new officers to the workforce. There are significant overtime costs at the other uniformed agencies - fire, correction, sanitation - as there have been for years. Hundreds of millions of dollars in savings could be found through hard OT spending caps, Stringer showed.

Spitalnick pushed back on this, too, saying "This administration has taken major steps to reduce overtime, such as unprecedented overtime reforms at the NYPD that will ultimately save $70 million a year."

As for the "budget cushion," while the de Blasio administration has touted a record amount of savings, Stringer points to target percentages of operating expenses that should be set aside, with the city falling short.

The comptroller says that in order to be best prepared for a downturn and avoid major city layoffs and cuts, the cushion should be between 12 and 18 percent of expenses. It is currently at 10.6 percent and in need of at least another $1.2 billion in order to reach the floor of that safer range.

To find more savings, Stringer wants the city to implement a PEG, or program to eliminate the gap, which would require city agencies to identify potential savings of a certain percentage of their expenses. "This is about finding efficiencies in agency budgets, not about cutting jobs or vital services," Stringer said.

About half the City Council has also formally called on the mayor to institute a PEG, though he has not. Still, de Blasio indicated in his preliminary budget presentation that a PEG is on the table as he engages with the Council and heads toward releasing his executive budget in May. More will be said on the subject when City Council budget hearings begin in the next few weeks.

On savings, Spitalnick wrote that "budget monitors and rating agencies have all applauded this administration's fiscal prudence and focus on protecting against economic uncertainty – and investors agree."

Spitalnick added that "the administration has implemented an aggressive savings program of over $1 billion each year for the last two years -- in addition to billions in unprecedented health savings secured" in municipal labor contracts. "As the Mayor has made clear," she wrote, "we'll build on those savings in the Executive Budget this spring."

Asked by Gotham Gazette about the conversations between the comptroller's office and the mayor's office about a PEG, Stringer said "I have met with the mayor...he does recognize that we need to do an efficiency." Reminding everyone that the budget process has just begun, Stringer said that de Blasio "has not said no to the PEG...he's going to come back, as he should, and tell us what his plan is." 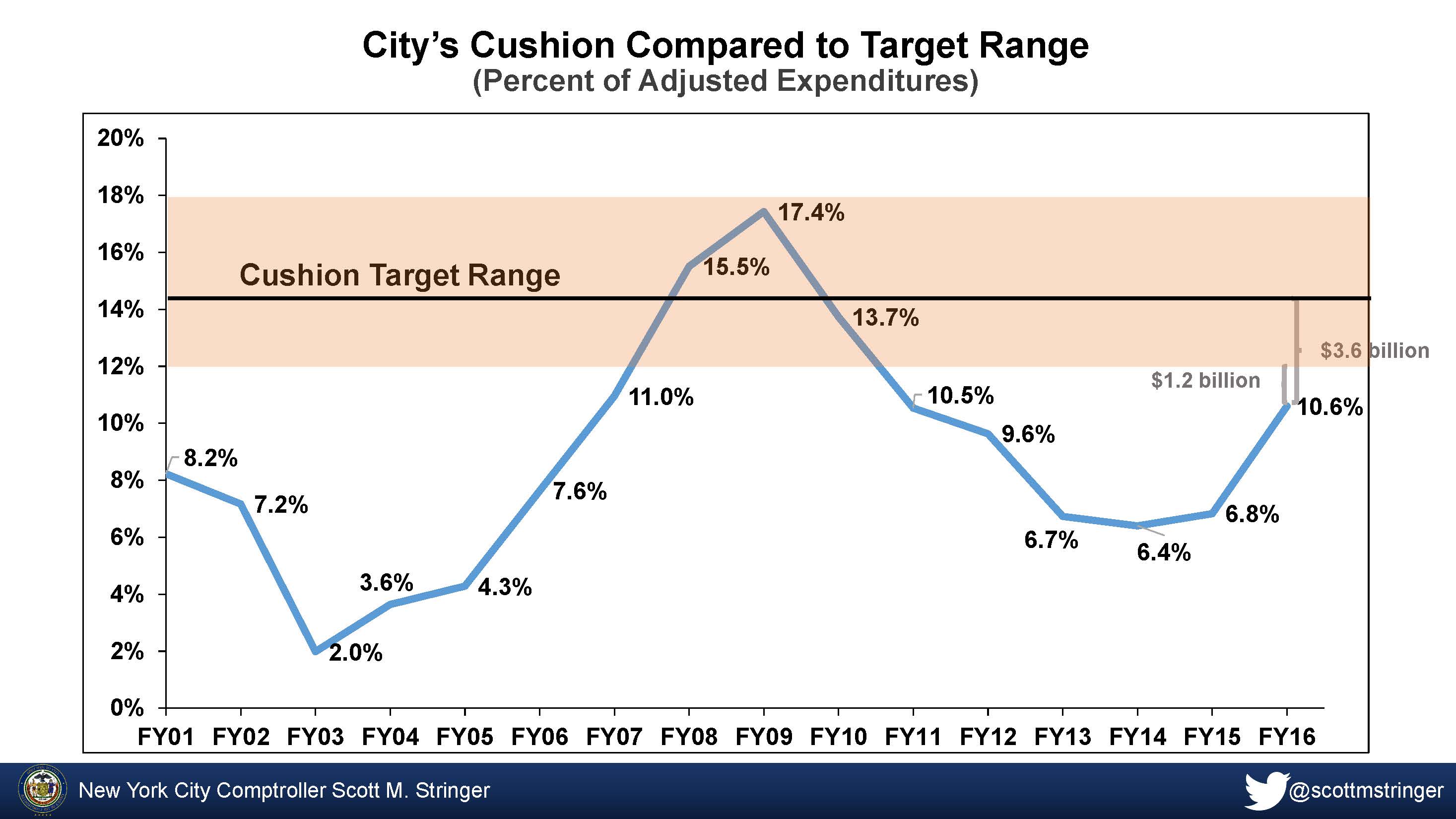 On outyear budget gaps - projected gaps between revenue and expenses - Stringer said that he foresees about a billion dollars more to make up in fiscal years 2019 and 2020 than the mayor is projecting. This is due, he explained, to his office's projection that, among other differences, the city will receive far less in taxi medallion sales and spend more on the public hospital system than currently budgeted.

Spitalnick, of de Blasio's office, said that "reserves are at unprecedented highs" and that "out-year gaps are low and based on the City's always-cautious revenue projections." She indicated that the administration believes Stringer is being overly cautious about taxi medallion sales by zeroing them out and that the administration was already adjusting those projections.

In his presentation Wednesday, Stringer also addressed the looming threat of cuts in funding for New York City through the state budget. That state will decide its fiscal 2017 budget before April 1, at which time the de Blasio administration may need to adjust its spending plan further than it may otherwise.

Referencing his recent trip to testify at a budget hearing in Albany, Stringer said that "a lot of our upstate legislators simply don't get it, they really think that New York City is their piggy bank." Despite the recovery, Stringer said, there are significant challenges, and the state cannot go through with significant cuts to city funding as are being threatened - most notably those to Medicaid and CUNY outlined by Gov. Andrew Cuomo.