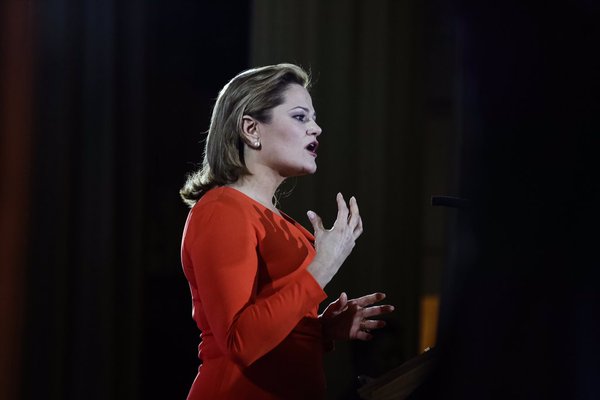 During her second State of the City address, titled “More Justice,” City Council Speaker Melissa Mark-Viverito announced on Thursday a slew of new criminal justice reforms, including efforts to minimize the number of New Yorkers that end up in the city’s jail by clearing old arrest warrants for low-level, nonviolent offenses, and creating more programs to help reduce recidivism. She also said that as the number of inmates on Riker’s Island decreases, a plan for closing the notorious jail complexes could be enacted.

Addressing an issue at the center of criminal justice conversation over the past year, Mark-Viverito said those who have avoided getting into trouble with the law again for years should have old arrest warrants cleared. Clearing these warrants, some of them decades old, would greatly reduce the city’s backlog of over 1.1 million open summons warrants, which are the result of people failing to appear in court after receiving a summons for a low-level, nonviolent offense, such as having an open container of alcohol.

These open warrants can affect the warrant-holder’s immigration status, hurt their chances of getting a job, housing, or other services, and, of course, can result in jail time. A system where someone ends up in jail or with a permanent record for “being in a park after dark is simply not fair or proportionate,” Mark-Viverito said during her speech.

The new initiatives outlined by Mark-Viverito will build upon steps the City Council has already taken to bring “more justice” to the criminal justice system, including creating a citywide bail fund, passing legislation to increase transparency at Rikers Island, prohibiting prospective employers from inquiring about criminal history on job applications, and introducing legislation to change the way the city punishes low-level, nonviolent offenses, such as having an open container of alcohol in public or being in a park after dark.

On Jan. 25, after nearly a year of negotiations, a package of eight bills known as the Criminal Justice Reform Act was introduced in the City Council. The legislation encourages police officers to issue civil penalties, rather than using criminal summonses or arrests, for low-level, nonviolent offenses. Mark-Viverito highlights the package of bills, which appears to have the blessing of Mayor Bill de Blasio, on Thursday, and explained that the Council would be moving it forward and building upon it.

In a statement, Brooklyn District Attorney Ken Thompson expressed support for Mark-Viverito’s announcements, saying, “I commend Speaker Melissa Mark-Viverito for placing criminal justice reform at the top of her legislative agenda….I look forward to working with the Speaker and our partners in government to continue to address this important citywide issue.” Thompson has held several events to help people clear arrest warrants and summonses.

Warrant amnesty, combined with the Criminal Justice Reform Act’s move to steer cases away from the criminal system and direct them to a civil court run by the city’s Office of Administrative Trials and Hearings could go a long way toward the speaker’s goal of minimizing the number of New Yorkers who end up in the criminal justice system and on Riker’s Island.

But reducing that number must also involve efforts that “address the systemic issues that plague neighborhoods and start to actually fix them,” Mark-Viverito said, vowing the Council will do just that by passing legislation to ensure the city has a multi-agency plan to provide more social services that target problems like unemployment, high school dropout rates, and substance abuse in areas with high crime rates.

In a continued effort to bring increased transparency to the city’s jail system, this year the Council will pass legislation establishing an Inspector General for the Department of Correction, who will focus “on systemic issues in the city’s jail system, and will be modeled after the successful NYPD Inspector General established by the City Council in 2013,” Mark-Viverito said.

Speaking with members of the press after Mark-Viverito’s speech, Norman Seabrook, president of the city’s Correction Officers’ Benevolent Association, said he “applaud[s] the Speaker for her genuine feelings of trying to make a difference, but in order to make a difference you have to sit down with everyone at the table...talk to the people that do this for a living as opposed to the ones that just push a pencil.”

“Our job is care, custody, and control,” Seabrook said of those officers who work at and for the city’s jails. “In order to rebuild the system, reform has to be on both sides,” he added, later explaining that one side is those pushing reform and the other is police and correction leaders, as well as district attorneys.

Bringing all stakeholders together to plan reform is exactly what newly-retired Chief Judge of the State of New York, Jonathan Lippman, intends to do as chair of an independent commission to examine Rikers Island and “explore a community-based justice model.” Mark-Viverito first announced the creation of the commission during her State of the City address.

“I very much intend to have a broadly represented committee, particularly of the criminal justice community, and that includes all of the players,” Lippman told reporters after the speech. “I think I have a background that allows me to bring the different sides of the equation to this table, and that’s exactly what I intend to do.”

Lippman’s firm, Latham and Watkins, which he joined after being forced to retire as chief judge due to age restrictions, will staff the commission and provide all the needed resources pro bono. The Center for Court Innovation, a criminal justice think tank, will also work with the commission, whose members will be selected by Lippman in consultation with Mark-Viverito and others.

“We are going to do the most careful, comprehensive look at Rikers that’s ever been done,” Lippman said, “and make very concrete, direct recommendations...What’s clear is that [Rikers] is central to the justice system here in our city, and it doesn’t work.” While the population at Rikers has already been shrinking, violence in the jails is a major problem, as is people being detained there for extended periods while they await trial for non-violent offenses.

Another important piece of minimizing the number of New Yorkers in the City’s jails is reducing the recidivism rate. “Every year,” Mark-Viverito said, “there are about 70,000 admissions to Rikers and other city jails - but only about 16 percent of those admitted are ultimately sentenced to prison.”

Yet even a brief stint in jail can have life-changing ramifications, she said. A few days in Rikers can cause someone to lose their job, and a record could prevent them from getting a new job or accessing other needed resources, causing them to fall into what Mark-Viverito calls an “endless cycle of recidivism.”

“Reducing recidivism must be a top priority,” Mark-Viverito said, and to that end she promised the Council will work with the Mayor’s Office of Criminal Justice to create a Municipal Division of Transition Services which will help make the reentry process for those exiting prison easier and more supportive by providing services like computer classes, resume building, drug treatment, and housing resources.

Another piece of the Council’s effort to reduce recidivism rates will be the development of a video visitation program for those who are incarcerated, as maintaining familial and social relationships has been proven to reduce recidivism. The program will allow families who cannot make the often day-long trip to Rikers Island to speak with their loved ones by visiting a local library or neighborhood center and using the video program.

The Council will also continue to call on the State to raise the age of criminal responsibility, so that 16- and 17-year-olds are no longer automatically tried as adults, Mark-Viverito said. New York is one of the two states in the country that still tries 16- and 17-year-olds as adults. Governor Andrew Cuomo has pushed to raise the age, but has not been able to get legislation passed through the Republican-controlled state Senate.

Along with an intense focus on criminal justice reform, Mark-Viverito also reiterated her support for a $15 minimum wage, emphasized support for immigrants, including by increasing language access and translation services, announced plans to increase civic and youth engagement, outlined ways the city can improve the community planning process, and stressed greater investment in young women.

"The State of the City is strong, but its foundation must be strengthened. That foundation is New Yorkers themselves," Mark-Viverito said on Thursday. "It's the student eager to vote or the community fighting for more green space. It's the immigrant family starting a business or the single mother bringing her baby home for the first time. It's our city's seniors and their caregivers. It's the New Yorker struggling to find a home, or the young man languishing in Rikers. And it is every young woman looking up at the glass ceiling...It's New Yorkers who make New York great. And it's New Yorkers who need more justice."