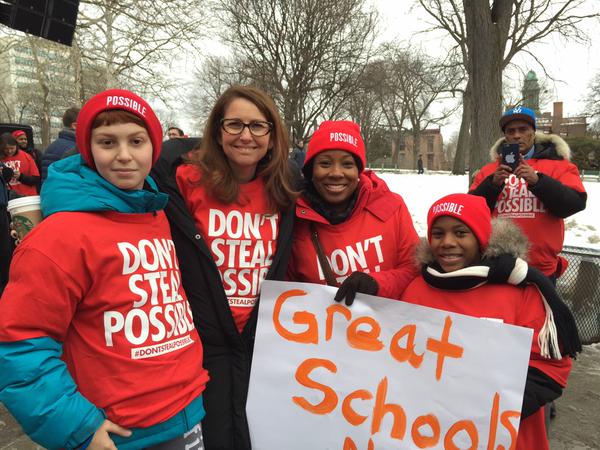 With 34 schools currently serving around 11,000 students, Eva Moskowitz’s Success Academy is, and will likely continue to be, the largest charter school network in New York City. Success currently operates in four boroughs and Moskowitz has an ambitious target of reaching 100 schools within the next decade, which prompts the question: Why are there no Success Academy schools on Staten Island?

Success Academy has not sought authorization to run a school on Staten Island. The borough only has three charter schools run by any provider, of the nearly 200 in the city. A fourth charter school is in the process of being set up. Some say that the borough’s current crop of district, charter, and private schools are relatively strong, leaving little demand for Success to move in. But, it may just be a matter of time, especially as the network continues to post extraordinary test scores and seeks to expand its reach further.

“We have a few charter schools that are serving our community’s needs, and if they no longer serve that need then I wouldn’t be opposed to Success Academy coming to Staten Island,” said Sam Pirozzolo, vice-president of the New York City Parents Union, a volunteer organization that has been a vocal supporter of the charter school movement.

Pirozzolo, who lives on Staten Island and was president of the borough’s community education council (largely parent advisory groups organized through a process run by the city Department of Education), said parents should be able to choose between district and charter schools, and that both have faults.

Success Academy hasn’t ruled out Staten Island in its expansion plan, said Ann Powell, a spokesperson for the network. “It’s certainly possible in the future,” she said pointing out that the network only expanded to Queens two years ago. “As we move forward,” she said, “we hope to be able to serve families and students in Staten Island.”

“Eva Moskowitz has a very good reputation with her charter schools,” Pirozzolo told Gotham Gazette, exemplifying the view of many who see Success schools as strong alternatives to traditional district schools.

Moskowitz, a former City Council member, founded the Success Academy network in 2006 after a failed run for Manhattan Borough President. She has staunchly defended the network’s methods, which elicit much debate. Critics say its strict disciplinary practices and overemphasis on testing are detrimental to students, while supporters cite high performance on standardized tests and stronger school culture than neighboring district schools.

Adding fuel to the fire have been controversies at individual schools. The New York Times on Friday posted a video from a Success Academy school that shows a teacher harshly reprimanding and shaming a first-grader for stumbling over a math problem. In October last year, the Times also exposed one Success principal’s “Got to Go” list of underperforming students, whose parents claimed they were being pushed out of the school. There have been separate allegations that students with disabilities are systematically mistreated. Two federal lawsuits have been filed recently against the network, with several more over the years. Public Advocate Letitia James and City Council Member Daniel Dromm, who heads the Council’s education committee (that Moskowitz once ran), have joined one of the newer complaints.

Moskowitz and Success have also battled with Mayor Bill de Blasio, who has been an outspoken critic of Moskowitz, over school co-locations, and are currently tangling over pre-kindergarten contracts.

“We support any school – public, charter, or private – that gives Staten Island students a greater chance of success,” said Staten Island Borough President James Oddo, in an email. “With that in mind, we want Staten Island parents to have a variety of local school choices.”

Oddo said the “greatest outcry” from parents and advocates was for schools that better serve children with learning disabilities. He cited the example of a private school in Teaneck, New Jersey which specifically helps students who have difficulties with reading. A number of Staten Island students were enrolled there, he said, since their neighborhoods lacked adequate facilities and their tuition was paid by the Department of Education.

“If Eva Moskowitz, or anyone else, is interested in talking with us about how they can help us meet the needs of these students, we would certainly welcome that conversation,” Oddo said.

Mike Reilly, president of Community Education Council 31, which represents the entire borough, believes Success hasn’t made the move to Staten Island because existing public schools are doing well. CECs advise the Department of Education on district needs and communicate with local residents.

“We’ve noticed that many charter schools open in areas where there’s a concern over performance of district schools,” Reilly said. “The need for charter schools doesn’t seem to be there in Staten Island. I’ve never heard anyone ask about opening a Success Charter school.”

City Council Minority Leader Steven Matteo, a Republican representing the mid-Island district, echoed this opinion. “The public and private schools in my district are well-regarded and I think parents are very happy with the choices they have,” Matteo said in a statement. “I am not sure there is a need, or necessarily a market for Success Academy here."

Most Success Academy schools are concentrated in areas of the city with the district schools that struggle the most - areas of the south Bronx, central Brooklyn, and northern Manhattan. Many parents see Success as desperately-needed alternatives to district schools with low standardized test scores and a lack of order. Some appear to be turned off by reports of Success suspension rates far higher than district schools’ and the extreme focus on performing well on test scores.

James Merriman, CEO of the New York City Charter School Center, believes that there is likely to be demand for Success charters on Staten Island even if it’s not overtly apparent. He speculated that transportation and infrastructure concerns might be holding back such a prospect.

“Networks generally try to not have their schools geographically dispersed. Growth might better happen through new independent schools or by someone starting a network, who lives on the island,” he said. He also noted that Success leaders have been adamant in the past about co-locating with existing schools and that Staten Island affords few schools with that capability.

Still, Merriman said, “I think there’s been demand for a Success school in most corners of the city.”