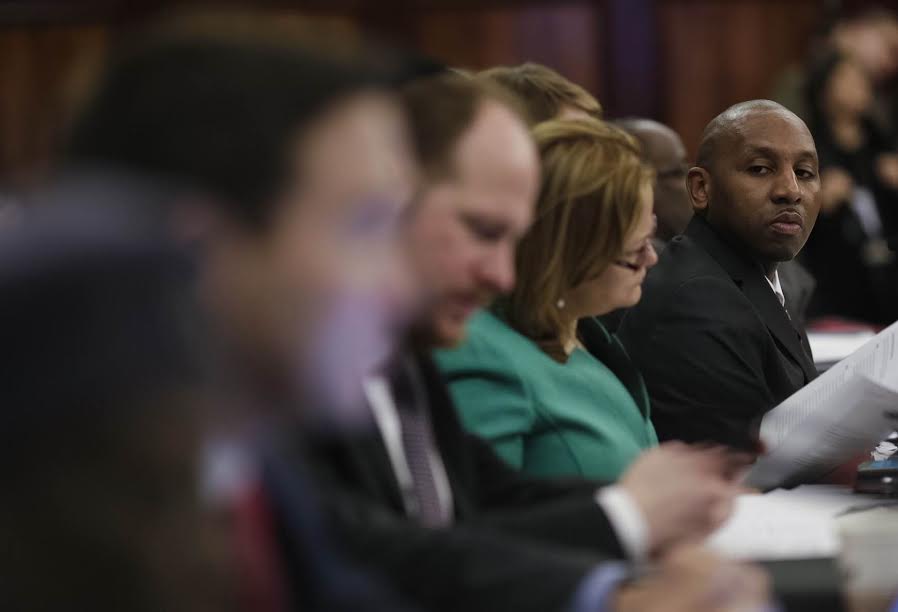 "Why am I here?" City Council Member Donovan Richards asked rhetorically, speaking with energy beyond what you would expect from someone in the midst of chairing 20 hours of land use policy hearings over two days. The question wasn't Richards rethinking his career path or delusion brought on by testimony after testimony about zoning code, it was a way of punctuating his explanation that of course he had to put communities of color at the forefront of discussions about affordable housing in New York City.

"This is the culmination," Richards told Gotham Gazette about the Council's consideration of de Blasio administration proposals to change citywide zoning rules aimed at increasing affordable housing throughout the city. "This is a build up. People are seeing what's happening in Bed-Stuy, we've seen what's happened in Harlem, this is people's lives, people have to move out of New York City because they can't afford to live here," he said.

Richards' role is especially prominent in the process as chair of the Council's zoning subcommittee and he is clear about his support for the underlying concept of the Mandatory Inclusionary Housing plan, which will require real estate developers to build affordable housing units if they receive an upzoning of a plot of land in order to build market-rate apartments. But, Richards plans to spearhead changes to the proposal - changes he sees as necessary so that low-income people of color across New York City, including in his Queens district, know that their government is working for them and can access affordable housing.

At the start of the two days of hearings, held Feb. 9 and 10, Richards set this tone, saying to top de Blasio administration officials: "There's not been any real push in this plan that we've seen so far that reaches the very incomes that reflect our communities."

Without setting exact numbers, it is clear Richards and many of his colleagues want New Yorkers making around $25,000-40,000 per year to be able to afford new housing built under updated zoning requirements. The current MIH plan is likely to lead to few apartments affordable to the lowest income-earners.

Listing examples such as East New York, Williamsburg, Jamaica, and Bedford-Stuyvesant, Richards said, "Residents are being priced out, and yet we have a program that does not reach these very populations. So can you explain to the public today and explain to this Council why there is no option that is reaching our communities?"

De Blasio's top housing officials said that they believe the plan strikes the right balance of income levels and affordability rates, and that there are other city programs to subsidize housing for the lowest-income earners. But, Richards and his colleagues are not convinced. They've repeatedly stated that they'll exercise their prerogative in the land use review process to alter the MIH plan to ensure apartments at deeper levels of affordability.

Under MIH, when a real estate developer receives an upzoning to build housing, they will be required (thus "mandatory") to make 25-30% of the units built affordable under certain income and rent guidelines. It is those income and rent numbers that the Council plans to lower before passing the zoning amendments.

"The Council spoke very clearly," Richards told Gotham Gazette of the MIH hearing, "we have to get to a place where we're reaching the very communities that we represent. It's very hard for members - we want to see a mandatory program, we need a mandatory program - but for members who represent communities like the Rockaways and Harlem and East New York, we can't go back to our communities and look them in the eye and say, 'well, we're bringing back these particular proposals for you to be in favor of where you can't live.' That's very complicated for us."

"As the chair," Richards continued, "it is my responsibility to make sure that we communicate very strongly to the administration that we understand the legality issues but that there is a way for us to get [to deeper affordability]. I just want to be clear, the Council is the driving force here...this ball is in our court, members feel very strongly about it."

Richards represents parts of Queens including Far Rockaway, Laurelton, and Rosedale. As he spoke with Gotham Gazette in a nearly-empty room adjacent to the City Council chambers, Richards repeatedly hit the table in front of him, adding emphasis to what he was saying about his role in crafting policy that will decide how land is used and who can afford to live in New York City for decades to come.

In the next room over, the second of the two hearings was entering its eighth hour, after ten hours of hearings the day before. Council Member David Greenfield, chair of the land use committee, was leading the proceedings. Throughout the two days, the Council was receiving testimony from and questioning de Blasio administration officials, affordable housing developers, advocates, businesspeople, and others. Some spoke in favor of the administration's plans, many spoke in opposition to their current structure. The Council must decide on its alterations to the plans by late March.

Richards is certain that the plans put forward by the de Blasio administration will change before the Council passes them. He again said as much during an interview last week on NY1, in which Richards cautioned against assuming that MIH will definitely pass the Council. "Most of us want to see it passed," he said, "but at the end of the day there has to be changes...this is about real everyday New Yorkers needing to be able to remain in their communities even as investments of infrastructure and other things come in."

The Mandatory Inclusionary Housing policy is in need of deeper affordability requirements, among other tweaks, Richards and others Council members have said; while the Zoning for Quality and Affordability proposal will also be tinkered with by the Council over the next several weeks as it considers changes to parking requirements, building heights, and senior housing mandates that are included in ZQA.

"Is this about fear of gentrification?" Gotham Gazette asked Richards. "Absolutely," he said.

Defending his plans at a recent press conference, Mayor de Blasio acknowledged fear of displacement and concerns over levels of affordability. "We know that people want to stay in the communities that they have been a part of their whole lives in many cases or in many cases for generations," he said. "Communities they literally built; communities they stood by during some tough times back in the '70s, the '80s."

De Blasio and his top housing officials have continued to stress that they need to create flexibility so that people of different income levels can find affordable apartments, with rents capped whereby they won't be considered "rent burdened," spending more than 30 percent of their income on housing. The administration has also been clear that the zoning changes must work for a variety of neighborhoods and for the foreseeable future. They argue that MIH creates a new baseline, upon which they use other mechanisms for ensuring affordable housing for New Yorkers.

In response to Council pushback on affordability levels, Kathryn Wylde, CEO of the Partnership for New York City, a business group that supports MIH, told the New York Times that "All these Council members are thinking about the immediate impact on their neighborhoods and their constituency. But when it comes to zoning, you can't afford to think that way."

In her formal testimony submitted to the City Council, Wylde said that "a massive, collaborative approach is required to meet the demand for affordable housing that neither government nor the private sector can accomplish on its own...In order to launch a housing production program that matches the scale of need, the city has to rely on changing its zoning requirements, more flexible design and use of air rights, in order to accommodate greater density and to create value that can be leveraged for the public good."

This echoed what top de Blasio officials said at the Council, warning that adjustments to the city's zoning rules must be contextualized in decades ahead and a variety of possible housing markets, both in terms of overall strength and location across a vast, diverse city.

It is that diversity, though, that has Council members balking at the current plan and looking to add deeper levels of affordability. What they are likely to do is tweak the different options that developers will have under MIH, possibly allowing them to choose to build fewer affordable units at lower rents. And, they may attempt to further incentivize the building of affordable units at lower rents through offering additional building height.

At this crucial point in negotiations and decision-making, Donovan Richards is all of a sudden one of the most important voices in the room. Richards almost wasn't in such a pivotal position. In May of last year, he jumped at the chance to chair the zoning subcommittee when its former chair, Mark Weprin of Queens, resigned from the Council for a job in the Cuomo administration.

Council Speaker Melissa Mark-Viverito was happy to approve of Richards' shift from chairing the environment committee. Now, Mark-Viverito, who represents low-income communities of color in East Harlem and the South Bronx, is working with Richards, Greenfield, and others to decide how new affordable housing will be built in New York City.

Regarding his role as the Council reviews the zoning changes, Mark-Viverito praised Richards' leadership and pointed to its impact. "As our changing city grapples with issues of community planning and affordability, it is incredibly powerful to have individuals at the table who represent the diversity of New York City," Mark-Viverito said in a statement.

When Richards first took over as chair of the zoning subcommittee in June of 2015, he told Politico New York, "We have an affordable housing crisis. We are seeing communities of color in particular that are being gentrified and residents are being pushed out, so I want to make sure I do all I can so that as we develop communities the people who help build them can remain in them."