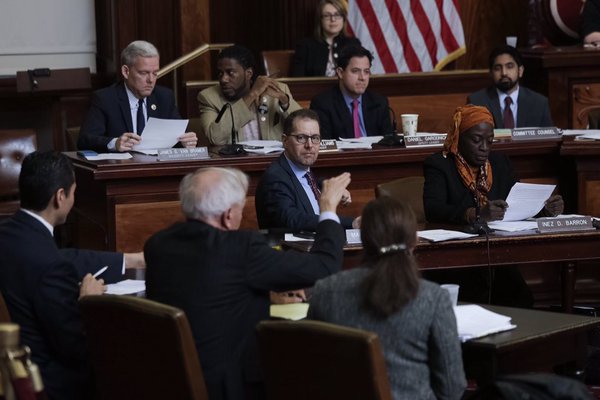 A scene at the City Council (photo: William Alatriste)

At one of the shortest City Council hearings ever held, Council members from the Committee on Rules, Privileges, and Elections approved on Wednesday morning a resolution to “delete” the Committee on Community Development.

The decision to eliminate one committee relates to questions regarding the number of Council committees, how many committees each member sits on, and member attendance at committee hearings. Regularly, by the time members of the public testify at City Council hearings, the chair of the committee holding the hearing is the only Council member remaining to listen. At many hearings, committee members leave after testimony from the first panel, usually made up of representatives from the mayor’s administration, sometimes to attend a hearing for another committee scheduled at the same time.

The elimination of the community development committee was prompted by the departure of Council Member Maria del Carmen Arroyo, who chaired the committee. Arroyo resigned in December and has since been replaced by Rafael Salamanca, Jr., who was sworn in on Wednesday.

Council Member Brad Lander, chair of the rules committee, told Gotham Gazette that Arroyo’s resignation “occasioned a conversation, ‘Do we need to keep that committee? Is there something that’s not being covered by the other committees that’s really important there?’”

Ultimately, Council members decided the Committee on Community Development was unnecessary, particularly given the fact, Lander said, that it did not have direct oversight over any specific city agency. Now that it’s gone, 36 standing committees and six subcommittees remain, with the 51 City Council Members sitting on an average of six committees. Critics have said that the Council has too many committees, a byproduct of the fact that chairing a committee has long come with an additional stipend, a practice the Council voted to end last month.

Speaking with Gotham Gazette on Wednesday, Council Member Lander said he doesn’t intend to do any further examination of the number of Council committees and said that he thinks the large number actually does a service to New Yorkers whereby the Council takes on a wider variety of important issues.

Part of the Council’s 2014 rules reforms, spearheaded by Lander and Council Speaker Melissa Mark-Viverito, reduced the number of times committees are required to meet per year from ten to five. Still, Council members are often unable to fully attend one committee hearing because another is scheduled at the same time.

“Council Member Treyger has to vote for land use, we have four hearings that all of us have to be at at the same time,” Council Member Ben Kallos said during a Feb. 29 hearing held by the Committee on Government Operations.

Dick Dadey, executive director of the government reform group Citizens Union, believes there was a correlation between the number of Council committees and lulus, which were awarded to Council members for chairing committees until Feb 19., when Mayor de Blasio signed a package of bills reforming the City Council and raising the salaries of all New York City’s elected officials.

“Committees are created not because of a need, but for maybe the need to give someone a lulu and increase their compensation,” Dadey said at a Nov. 23, 2015 public hearing held by the quadrennial advisory commission on elected official compensation. “I mean, take a look at that list, and some of those can be consolidated.”

To Lander, however, having a large number of committees is important, because it allows Council members to hold a more focused hearing and “drill down” into the details of an issue.

“There’s a balance that we want to achieve between having committees that can really dig in on important topics and not having so many committees that it’s impossible for people to attend, and that’s a real challenge,” Lander said on Wednesday.

Fritz Schwarz, chief counsel at the Brennan Center for Justice and chair of the 2015 quadrennial advisory commission tasked with reviewing the compensation levels of elected officials, seemed to indicate that he agreed with Dadey’s point that eliminating lulus may have an effect on the number of committees.

When asked by Gotham Gazette why he choose not to address the number of committees in the commission’s report, Schwarz said, “Essentially, I didn’t think we knew enough to jump on that. And it wasn’t necessary to deal with, because we want to get rid of the lulus, and what consequence that would have beyond getting rid of them wasn’t necessary to address.”

Though he conceded that Council members’ attendance at hearings “is a tension,” Lander believes “it’s outweighed” by being able to “bring more attention to the issues New Yorkers care about.”

“It’s a challenge,” Lander added, “one challenge is that each of those committees needs to have enough members on it. And then every member is on a lot of committees and it is a challenge to go to beginning to end for all of them and still do all the other things in the job.”

Lander said that each committee chair is able to become an expert on their issue and that there are Council aides who also attend hearings on behalf of Council members. Attendance at committee hearings could be better, Lander acknowledged, if there were fewer committees, but he said that it wasn’t a trade-off he thought would benefit New Yorkers.

Former City Council Member and current Manhattan Borough President Gale Brewer believes it would be wise to examine the number of committees Council members sit on, and their ability to attend the hearings held by those committees.

“I think we should look to see how many committees a person is on, and they should show up at them. And there's always an issue of signing in for five minutes, getting counted, and leaving,” Brewer said during a Nov. 24, 2015 public hearing held by the quadrennial advisory commission. “I think that would be something to look at more carefully. This has never been monitored.”

Yet, as Lander said, the decision to delete the community development committee is simply a response to Arroyo’s resignation, and “there is not a more comprehensive look underway.”