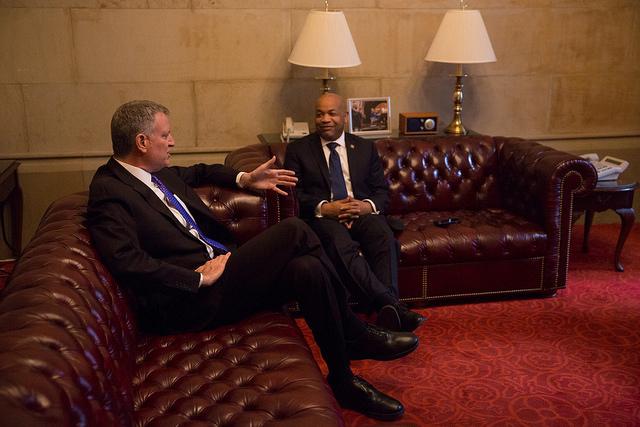 Mayor Bill de Blasio didn't need to see the Assembly and Senate one-house budgets to know where he stands with each chamber - Assembly Speaker Carl Heastie is a close ally of the mayor, his fellow New York City Democrat, while Senate Republicans hold a major grudge against de Blasio for leading a failed effort to boot them from the majority two years ago. Most Republican legislators, who control the Senate but not the Assembly, are also philosophically opposed to much of de Blasio's agenda.

Still, the documents give de Blasio - himself in the midst of a city budget process that depends quite a bit on state decisions - more clarity as budget negotiations truly heat up in the capital. With the governor's executive budget out for two months, plus the newly passed one-house budgets, de Blasio now has an idea of how hard a fight he and his allies have to get what they want.

The Legislature uses one-house budgets to set chamber priorities after analyzing the governor's spending plan, which is typically issued at the start of the year. The budgets are non-binding but used to send clear messages about majority conferences' top priorities before entering final negotiations with the governor.

While there are a variety of city-specific issues at play, de Blasio has made it clear that he is supportive of Cuomo's push for both a minimum wage increase toward $15 per hour over the next several years and a paid family leave policy. These are two major agenda items for the governor, where Cuomo laregly has Democratic support but must negotiate deals with Republicans.

With all three budgets out, Mayor de Blasio, city officials and residents are all taking note of where things stand on several other major issues.

Mayoral Control of Schools
Cuomo: The governor's budget includes a three-year extension of mayoral control, which is fairly short compared to the seven-year extension Mayor Michael Bloomberg was able to win during his tenure. Last year Cuomo also proposed three years, but the three parties only agreed on a one-year extension in June, angering de Blasio and his allies. (The issue was bumped beyond the budget into legislative session last year, as it may again this year.)

Assembly: Mayor de Blasio's allies in the Assembly support a seven-year extension of mayoral control, which would make expiration June 30, 2023. Such a distant date would remove the issue from the political equation for years to come and prevent Cuomo and Senate Republicans from holding it over de Blasio's head, even through a potential second term for the mayor.

Senate: While addressing the chamber before the vote on its one-house budget on Monday, Majority Leader John Flanagan said that he didn't feel mayoral control was a budget issue. He indicated he expects to have relevant hearings later in the year where de Blasio will be asked to testify. When asked about attending hearings by Gotham Gazette de Blasio said on Monday that he had expected them and welcomes the chance to discuss mayoral control. He was quick to remind that he had already met with Flanagan and discussed the subject.

"I've already sat down with him, obviously, and talked to him about this," de Blasio said on Monday at an unrelated press conference in Harlem, referring to the mayor's trip to Albany earlier this year. "I certainly made my case to him, it was a very good and respectful meeting. I think he heard my points. I'm not saying he agreed with all of them, but he heard them. He knows a lot about education, obviously, from his own work on the education committee in the Senate. And I will welcome a dialogue. I told him I will happily appear at a hearing any time."

CUNY and Medicaid Cost Shifts
Cuomo: The governor's budget could cost the city nearly a billion dollars in funding through plans that would see the city assume increasing costs for Medicaid and funding for CUNY. The governor insists that the city can afford to take on a greater share of the costs of both city-state programs.

Facing criticism from de Blasio, his allies, and budget watchdogs who warned the shifts would devastate the city's finances, Cuomo insisted his budgeting would simply foster a joint cost-saving exercise that in the end wouldn't cost the city anything. However, no adjustments were made to the plan in the governor's 30-day budget amendments, leaving the cost shifts as an expensive bargaining chip. While aides to de Blasio and Cuomo have been in conversation, there has been no evidence of progress in finding such efficiencies.

Assembly: Assembly Democrats rejected both cost shifts, winning the praise of the mayor and education groups who have turned up lobbying efforts in recent weeks. Advocates say the cost shifts would devastate CUNY and make it much harder to provide higher education, especially to those who can't afford private school tuition.

Senate: Both proposals remain in the Senate plan. Debate over the CUNY shifts took a curious turn on Monday as Republican Sen. Cathy Young, the chair of the finance committee, offered a new rationale for the CUNY proposal: the cost shift as a punishment for recent anti-Semitic incidents at CUNY and what some lawmakers see as an inefficient response to them.

"In light of recent anti-Semitic events at CUNY campuses," reads the Senate's budget summary, "the Senate denies additional funding for CUNY senior schools until it is satisfied that the administration has developed a plan to guarantee the safety of students of all faiths. The Senate fully understands the importance of the City University System, and supports the full restoration of State support when this difficult and atrocious situation is adequately addressed."

Democrats were taken aback by the rationale. "Everyone agrees that anti-Semitism is bad. But the way you fight it is not by hurting the students," said Sen. Toby Ann Stavisky of Queens.

"This administration has been outspoken in ensuring that NYC continues to be a model for other cities in combating anti-Semitism," de Blasio said in a statement to Gotham Gazette. "Our institutions of higher education must be spaces where people of all faiths can thrive and feel safe, and CUNY must ensure that's the case. The best tool to combat hate is education - and we must be investing in it, not cutting it."

Tax-Exempt Affordable Housing Bonds
Cuomo: The governor's budget includes a proposal to give the state final say over housing projects financed by federal tax-exempt bonds the state distributes. The Public Authorities Control Board, made up of one appointee each from the Governor and legislative leaders, would have the ability to veto individual affordable housing projects. Cuomo touted the plan as lending transparency to the process, but contractors, housing advocates, Mayor de Blasio, and others expressed significant worry it would lead to instability, uncertainty, and delay to badly-needed affordable housing projects.

De Blasio appeared buoyed when asked about both chambers rejecting the plan. "I think in the democratic system that's a rather striking statement," the mayor told reporters on Monday afternoon. "We said from the beginning that we thought this would make it harder to create affordable housing, and would slow the process down. It's quite clear the Senate and the Assembly agree, and we appreciate their support and look forward to working with them, because we need to, in fact, speed up the supply of affordable housing, not slow it down."

Construction Takeover
Cuomo: The governor's budget proposes the creation of "The New York State Design and Construction Corp." that would be given oversight of public construction projects worth over $50 million. The DCC would be a subsidiary of the state's Dormitory Authority and would be headed by three commissioners, all appointed by the governor. Budget watchdogs and legislators see the plan as a power grab designed to give the Governor say in major construction projects headed by independent agencies such as the MTA.

MTA Funding
Cuomo: The governor's plan technically provides $8.3 billion in funding for the MTA capital plan, per an earlier commitment Cuomo made in striking a deal with de Blasio over plugging a funding gap. However, the governor's budget only appropriates $1 billion for the MTA this year and puts off the rest of the funding until the MTA exhausts its current resources.

Senate: Accepting most of Cuomo's funding plan, the Senate requires the state to provide $3.5 billion in additional funding to the Department of Transportation Capital Plan.

Tenant Protection Unit
Cuomo: The governor's budget recommends $4.4 million in funding for the agency he credits with restoring 50,000 units to the affordable housing rolls.

Assembly: Provides a $5.8 million appropriation for the unit.

Senate: Denies funding for the unit.

Next Steps
On Tuesday, the two houses of the Legislature convened a joint hearing to kick off the formal conference committee process whereby representatives of each house meet to hash out the differences in their plans. Leadership announced committee hearings on public protection, mental hygiene, higher education, general government, environment and housing, transportation, economic development, human services/labor, and education all to take place throughout the day on Wednesday.

Cuomo, Heastie, and Flanagan are also expected to pick up their closed-door negotiations with the deadline for a final budget being April 1. When the state budget is decided, de Blasio will then have to weigh its impact on his budget negotiations with the City Council, with a final city budget due at the end of June.