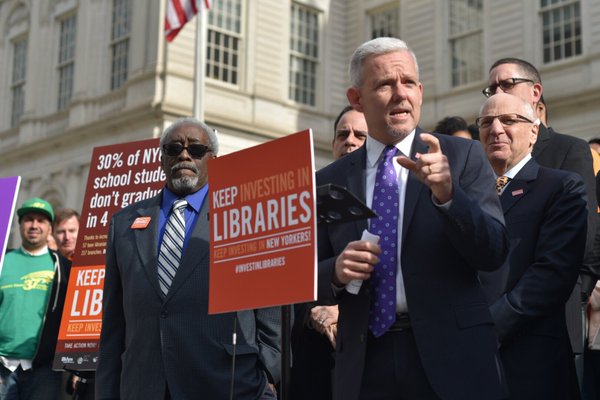 With last year’s added funding, the Queens Library system “increased its ESOL seats by 6.6 percent,” said Dennis Walcott, the new president of the Queens Public Library and former schools chancellor. “However, we still turned away more than 1,100 students due to the lack of capacity. The 2016 investment was historic, but too many needs remain unmet.”

Though the Mayor and the City Council restored $43 million in funding in last year’s budget, Mayor de Blasio has baselined $21 million in his preliminary fiscal year 2017 budget.

“This year, we have taken the unprecedented step in the preliminary FY 2017 budget of baselining the additional mayoral operating funds provided last year,” Amy Spitalnick, a spokesperson for the mayor, said in a statement to Gotham Gazette.

“We have been fighting for several years, as all of you know, to restore the funding that was cut from the libraries beginning in 2008,” said Council Member Jimmy Van Bramer, who chaired the hearing, in his opening remarks. “We have continued to urge the administration to baseline all of that funding, and were very pleased when the mayor baselined roughly half of that in the preliminary budget. But it is equally important that the remainder be baselined in the executive budget.”

De Blasio unveiled an $82 billion preliminary FY17 budget in late January. His executive budget will be released in late April or early May and after the Council has presented its official preliminary budget response. In a year with little drama around the budget, funding for libraries and summer school programming appear to be among the few discrepancies between the administration and the Council.

It is unusual for the administration’s presence to be somewhat absent at a City Council budget hearing, and though Tom Finklepearl, commissioner of the Department of Cultural Affairs, testified, funding for libraries went unmentioned throughout his time in front of the Council members presiding over the hearing.

While the presidents of the three library systems; Council members; representatives from DC37, the union that largely staffs libraries; and the many librarians and library advocates present at the hearing were all strongly in favor of completely restoring funding and baselining that money, no one from the de Blasio administration discussed the issue on the record. In part, this is the result of the fact that the libraries have their own boards of directors and operate in somewhat gray area. It was not immediately clear why Finklepearl was not asked to explain the administration’s stance on library funding.

Mayor de Blasio did include library systems in the 10-year capital plan for the first time ever last year, dedicating more than $300 million to the three systems. Yet, the three library presidents argue that the capital investment falls more than $250 million short of what is needed to address critical maintenance needs of the city’s libraries, many of which are over half a century old.

“Infrastructure problems have a direct, negative impact on our staff’s programming,” said Anthony Marx, president of the New York Public Library, which serves Manhattan, the Bronx, and Staten Island. “At 115th [Street] Library in Harlem, for example, a coveted basement programming space was rendered unusable by serious leaks in a nearly 100-year-old underground pipe. The leaks destroyed the floor, and the outdated pipe and boiler need to be replaced.”

“I fear for the soul of a city that allows libraries to deteriorate so quickly,” said Linda Johnson, president of the Brooklyn Public Library, adding that unplanned branch closures caused by the sudden need for repairs are an all-too-frequent occurrence for Brooklyn’s branches. Johnson says the administration must “baseline the increased operating support from last year and provide sufficient capital funding for libraries to appropriately address emergency needs.”

Libraries provide an array of services that help to achieve the goals of both the mayor and the City Council, including providing IDNYC enrollment and universal pre-K. “Libraries have come through for this administration in a very big way,” Van Bramer said.

For example, Marx pointed out at the hearing, the mayor and the Council have set an ambitious target of having every child reading on grade level by the end of second grade, though currently, 70 percent of the city’s third graders cannot read at grade level. The added funding distributed to the New York Public Library last year “provided us with the opportunity to expand our early literacy programming across the system, increasing overall attendance by 16 percent,” Marx said.

Though libraries did not receive the full $65 million in restored funds that they pushed for last year, all three libraries have made “measurable gains,” and have “nevertheless found a way to deliver six-day service and increase our programming,” Walcott said.

Last year’s added funding allowed the city’s public library systems to offer six-day service once again, for the first time in nearly a decade. As of November, 2015, all 217 libraries across the city are open for at least six days a week, with 15 branches open seven days a week.

“Six day service is a floor, not a ceiling,” Van Bramer said. The three library presidents and the scores of library-lovers that showed up both outside City Hall for a press conference, and inside City Hall for the hearing, want the city to restore the remaining $22 million in funding in order to improve and expand programs that the libraries offer, particularly early literacy services, and increase to seven-day service.

“Libraries are on the front lines of tackling inequality,” Marx said, touching on the main throughline of de Blasio’s agenda. “No institution does more for New Yorkers; from helping to bridge the digital divide to offering new immigrants a chance to learn English, libraries offer essential services for high-need communities, at all stages of life across this city.”