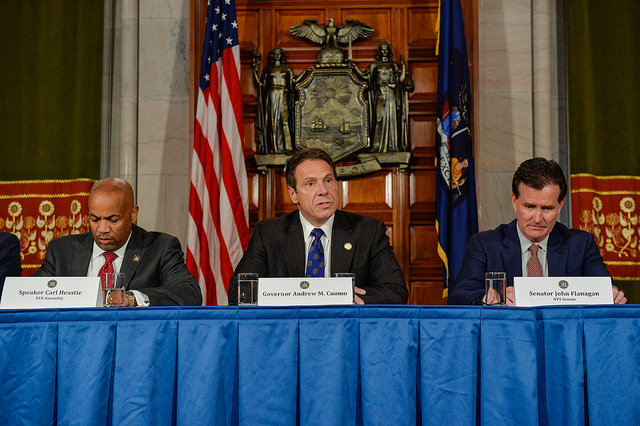 "Top of my agenda is going to be ethics reform," said Governor Andrew Cuomo, speaking on NY1 on Jan. 3. "We have done a lot in Albany, but we haven't done enough. And I'm going to push the legislature very hard to adopt more aggressive ethics legislation, more disclosure, more enforcement, etcetera."

While the governor did unveil an aggressive ethics agenda during his State of the State speech a week later, Cuomo’s words ring hollow now, as a state budget containing no government ethics reform passes and any hope for such reform happening this year is pushed to the legislative session, where it is unlikely to occur.

Cuomo has done nothing public on ethics reform despite the promises he made during his Jan. 13 State of the State address. “We have to remember the people we serve, and it’s our responsibility to give them the government that they deserve,” Cuomo said at the time. “And remember the stronger the citizen trust, the stronger the government’s ability.”

Just about a month after two of New York’s most powerful legislators were convicted of several federal corruption charges in separate trials, Cuomo laid out a plan to close the LLC loophole, which allows limited liability companies to circumvent New York’s campaign donation limits and give large sums of money to candidates through various LLCs, limit the amount of outside income legislators may earn, and adopt a publicly funded campaign finance system, among other reforms.

Yet, as negotiations for the state budget come to a close, the “three men in a room” deciding the state’s roughly $150 billion budget have not moved ethics reforms that could help give the people they serve “the government that they deserve.” In a Siena College poll released Feb. 1, 89 percent of New Yorkers said corruption in state government is a serious problem, with 60 percent calling for outside income to be banned.

Although Assembly Speaker Carl Heastie, a Democrat and one of the “three men in a room” along with Gov. Cuomo and Republican Senate Majority Leader John Flanagan, has pledged to “increase transparency and accountability” and “restore the public’s trust in government,” the lack of any ethics reform in the state budget calls Heastie’s follow through on that commitment into question.

“The Assembly has pledged to enact comprehensive ethics reforms, and we take that commitment very seriously,” said Heastie in a press release detailing the ethics reform component of the Assembly’s budget plan, which was released Friday evening March 11. Like Cuomo, Heastie outlined an ethics reform agenda, but did little else to publicly promote it.

On that Friday morning three weeks ago, Heastie outlined the Assembly Democrats’ ethics package at an event held by Crain’s New York Business. The plan also includes a proposal to close the LLC loophole, as well as proposals to limit the amount of outside income legislators may earn (though not as strictly as Cuomo’s plan), and to make it so that legislators who also work as attorneys can only earn money for the casework they perform, rather than for simply serving as "of counsel," lending their name to a law firm - a practice at root of the scandal that brought down Heastie's predecessor, Sheldon Silver.

Both Silver and former Senate Majority Leader Dean Skelos were brought down last year by corruption convictions related to their use of their public offices for private gain.

The new head of the Republican-controlled Senate, meanwhile, has repeatedly questioned the need for further ethics reform, and he and many other Senate Republicans are opposed to making the Legislature full-time or placing any limits on lawmakers’ outside income.

Sen. Flanagan has previously pointed out that the Senate passed a pension forfeiture bill, aimed at ensuring that legislators convicted of public corruption cannot collect a government pension, in a deal with the Assembly, only to have the Assembly back out at the last minute. Pension forfeiture is notably absent from the Assembly's reform plan.

As the New York Times Editorial Board writes, “In Albany, this is how the stage gets set for each legislative house to praise itself and to blame the other for the failure, yet again, of meaningful reform, and for Mr. Cuomo to blame them both.

New Yorkers, legislators, and government reform groups alike say that ethics reform is essential, “especially considering the context of the past year,” as Cuomo himself said during his State of the State. Yet at a time when Cuomo has the most leverage, he has failed to achieve reform. Heastie has decided not to aggressively pursue the Assembly's plan, and Flanagan has appeared totally disinterested in the issue. The minorities in each house - one Democratic, one Republican - have actually been more vocal than the majorities.

“We are blowing our Watergate moment,” Senate Minority Leader Andrea Stewart-Cousins told the Wall Street Journal. “This year’s budget process has been nothing but a series of covert meetings and phone calls shielded from the press and public.”

Senate Republicans’ resistance to outside income limits and closing the LLC loophole have left room for Cuomo and Heastie to play a blame game. In part because neither did anything beyond one speech to promote ethics reform leading up to the budget, there is room to question their seriousness. But, Senate Republicans have, it seems, let the two Democrats and Assembly Democrats in general off the hook.

“It is incumbent upon legislators to work to significantly reduce corruption, and we can do so by passing these common sense measures,” Assemblymember David Buchwald said upon signing a pledge to fight for good government reform, including closing the LLC loophole. “I think the vast majority of New Yorkers would want to see their representatives sign this pledge.

"In recent times, the New York Legislature has been marked by regular bribery, rampant kickbacks and a rancid culture," U.S. Attorney Preet Bharara, who prosecuted both Silver and Skelos, said during a talk in Albany in February.

A coalition of government reform groups, including Citizens Union, Common Cause, the League of Women Voters, the New York Public Interest Research Group, and Reinvent Albany, released a statement denouncing the governor and legislative leaders for failing to pass any ethics reform in the three-and-a-half months since former legislative leaders Skelos and Silver were convicted of corruption, despite strong public demand for action to be taken.

“With a recent poll showing that nearly 90% of New Yorkers believe that unethical behavior is a serious problem in state government a month before former legislative leaders Sheldon Silver and Dean Skelos are sentenced for public corruption,” the statement reads, “the governor and legislative leaders have an obligation to New Yorkers to reach a significant agreement on ethics reform.”

“The collapse of ethics reform during the budget is failure by the governor to mobilize overwhelming public support for change," said Blair Horner, executive director of NYPIRG. “New York State’s political leaders have chosen to ‘kick the can’ instead of tackling the needed reforms to respond to Albany’s ‘Watergate moment.’”

When Cuomo was asked in February whether ethics reform were likely to remain in the budget, the governor replied, “As we get closer and actually have budget conversations, it’s going to be at the top of the list.” Not long after, Cuomo conceded that ethics reform would not be included in the budget.