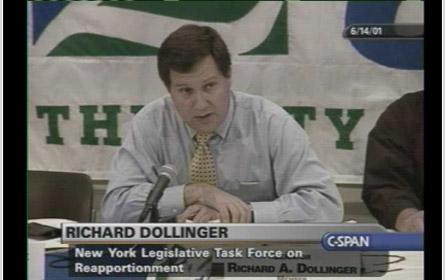 Over the past month the Legislative Task Force on Demographic Research and Reapportionment, also known as LATFOR, has held public hearings across western and upstate New York. The task force gathers opinions from localities and citizens about how their districts should be drawn in light of new census data.

Every 10 years the same process takes place, and according to many good government groups and politicians, every 10 years districts are drawn to protect the Republican majority in the Senate and to enhance the Democratic majority in the Assembly. Minority populations are diluted in some areas and concentrated in others to boost some legislators while cities are carved up, making odd shapes across the map.

Most of the time, the drama, such as it is, revolves around precisely where the lines will go -- and who will benefit and who will suffer as a result. This year though, the key dispute concerns not the lines themselves but the process for drawing the lines.

Good government groups have united in an effort to do away with LATFOR -- to take the power of redistricting away from legislators and put it in the hands of an independent board. Gov. Andrew Cuomo put forward a bill that eliminates LATFOR and creates a non-partisan commission; the proposal has the support of good government groups as well as Assembly Speaker Sheldon Silver.

Senate Republicans, who stand to lose seats and possibly their majority because of the increase in Democratic voters in the state, have insisted the only way to change the process is to amend the state constitution -- something that could not be accomplished in time for this redistricting. Cuomo responded by promising to veto any lines drawn by LATFOR "that are partisan." That means LATFOR must try to comply with Cuomo's demand -- or face having its work overturned.

Members of LATFOR are clearly feeling the pressure of having their work so publicly scrutinized and criticized. In interview and at hearing they have fought back in an attempt to paint themselves as relevant and honest.

LATFOR began holding its hearings in July in Albany and will hold hearing in the city I September. After it finishes up with a session on Long Island in October, McEneny said, it will start drawing the lines.

The old Albany story, though, goes that the lines are drawn long before LATFOR's public hearings and that legislators already know how their districts will change.

Bill Samuels, a plastics magnate, who runs the progressive New Roosevelt Initiative, says it has long been part of Albany lore that a deal was struck in 1982 between legislative heads to keep the Democrats in charge of the Assembly and Republicans in charge of the Senate -- no matter what the statistics say. In a town where the budget is decided by three men in a room despite months of public hearings, it is easy to see how such a mystique arose.

Reflecting this viewpoint, Samuels called the hearings a "a sham, a waste of time." He added, "A year and a half ago, Cuomo said he'd veto, and nothing's changed."

McEneny took great umbrage at this. "I asked everyone from Common Cause to Citizens Union â€¦ if these hearings were useful to them and they all said 'yes.' We have a two-stage process: We take public input and that ends in October. If the legislature did come back and pass the legislation then the work we did would be there for whoever took charge," he said.

Back to the Legislature?

As the hearing began last month, former Mayor Ed Koch, who has founded New York Uprising to push for redistricting reform, and Dick Dadey, executive director of Citizens Union (whose sister organization publishes Gotham Gazette), called for the legislature to approve a bill creating a special commission to draw legislative districts. Noting that that had not occurred, they said in a written statement, "The rearing of LATFOR's public head today represents a continuation of the old-school partisan gerrymandering that has existed for over three decades and prioritizes the re-election of incumbents above all else in drawing new districts. This rigged practice has resulted in a 96% re-election rate among incumbents that has divided communities, underrepresented minority groups in the legislature and resulted in few truly competitive elections. "

McEneny said that groups opposed to the current redistricting system are taking their anger out on LATFOR. Instead of attacking the task force, he said, critics should push Cuomo and Senate Republicans to return to Albany to pass an independent redistricting bill.

"Gov. Cuomo can have a role in this by primarily going to the Senate and dealing with [majority leader] Dean Skelos," McEneny said, noting that he and Speaker Silver both support independent redistricting.

Samuels and McEneny see eye to eye more than they might realize. Samuels thinks Cuomo should focus on getting Senate Republicans to agree to pass legislation to establish a non-partisan commission. But at the same time he thinks it would be extremely difficult â€“ impossible, even â€“ to get Skelos to agree to such a thing.

Many experts believe independent redistricting will threaten, if not doom, the very slim Republican majority in the Senate. The state has seen population declines in rural, large Republican districts in northern and western New York, while the city and its suburbs have grown, if only modestly. Going into the current process, Republican districts already tend to have fewer residents than Democratic ones (for maps showing the deviations, go here), meaning even a slight population shift could cause a major loss in seats for the GOP.

In light of that, Samuels said, "I just don't see why Skelos would do this."

But some disagree. Political scientist Bruce Gyory has said it would be in the GOP's interest to try to strike a deal soon.

""If they push too far in truly partisan gerrymandering, the governor either vetoes it or the courts will overturn it, in which case it will go over to a special master," Gyory told NPR's Karen DeWitt. That special master, according to Gyorgy, would be appointed by the Justice Department which, under Democratic President Barack Obama, is unlikely to be very sympathetic to the Republicans.

Samuels thinks preventing independent redistricting â€“ and so keeping GOP control of the Senate -- was probably Skelos' top priority for Skelos this year. On the other hand, Samuels surmises, the issue -- which does not poll especially high with the public and does not get much media attention -- was not particularly high on Cuomo's agenda.

"Maybe Gov. Cuomo has other priorities -- five or six things he needed to get done first that the public care about more," Samuels said. "If you and I offered to pay for everyone in New York who cares about the issue to come protest for independent redistricting, there still might only be 500 people up here."

Samuels has called on Cuomo to form his own advisory commission to put together their own lines, so that there will be a reference point for LATFOR and the public. This would also, in his view, give the courts something to refer to if Cuomo vetoes the LATFOR lines, sending the issue to the judicial branch.

Former State Assemblymember Michael Benjamin thinks Cuomo should accept the task force lines for now, to avoid what he thinks could be election chaos. In return, Benjamin wrote in the Post, the legislature would have to crate a no-partisan, diverse commission which would redraw the lines in 2015, rather than wait for the 2020 census.

Republicans also note that the Democrats controlled the Senate for two years -- 2009 and 2010 -- and made no effort to act on changing the redistricting process."

As McEneny pointed out, a lot of groups are finding the hearings useful. Through its blog, Common Cause New York has provided census and district information about every area that LATFOR has visited. And it has found interesting examples that point up the complexity of the process and some of what is at stake.

The Capital Region does not have the typical problems associated with upstate -- instead it shares characteristic with urban areas throughout New York. According to Common Cause, "In addition to having higher numbers of minority residents ... residents of Albany, Troy and Schenectady have lower incomes than residents of the surrounding towns, are less likely to own their homes, are less likely to be employed in white collar jobs, and are more dependent on public transit."

Common Cause writes, "It would be ideal" if two of the three cities could share a Senate district to better represent the minority population, but doing so would likely create an odd district that cut through many counties.

"This division of the city of Albany between two Assembly districts has no relationship whatsoever with the characteristics of the local community," says Common Cause. The minority population of Schenectady is also broken in two and represented by two Republicans, James Tedisco and George Amedore.

Common Cause notes that, while the state constitution prohibits the unnecessary splitting of counties and towns, it does not bar dividing cities. "In the Capitol Region, the urban minority communities responsible for the region's newfound growth should be respected and allowed the opportunity to benefit from unified political representation in the Assembly," Common Cause concludes.

During the hearings, Albany Common Councilman Anton Konev testified in favor of having Albany represented by one Assembly district, saying the current setup "dilutes the minority population."

As the hearings continued, at east one thorny issue did seem to be resolved. In 2009, the state passed a law mandating that state prisoners be counted in the communities they hail from, not where they are jailed. This results in decreased population, and political representation and funding, in New York City, where about half the prisoners are from, and increased population upstate, where most of them serve their time. The law will reduce the population of rural districts whose numbers are bolstered by prisons.

At the July 6 hearing, controversy arose when McEneny and his Republican counterpart Sen. Michael Nozollio indicated they were not following the 2009 law A number of Senate Republicans have filed suit to overturn the law, and it seemed that LATFOR was not defending the law in court.

On Aug. 4 LATFOR was back in Albany, returned from public hearings in Rochester and Syracuse, and its members had on less contentious faces. McEneny and Nozollio insisted that LATFOR would follow the prisoner counting law.

The larger issues almost certainly will not be settled nearly as easily.