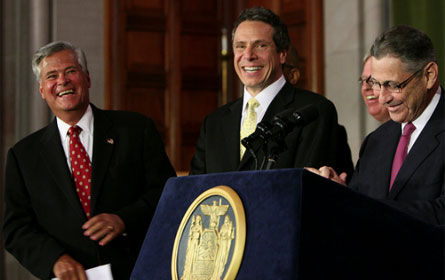 On Friday, after months of waiting and wondering, unsure of whether they would have a job come December 12, the remaining staffers of the Commission on Public integrity were told to report to work on Monday. The skeleton crew remaining at New York’s crippled ethics watchdog organization have been tasked with collecting complaints about ethics violations and taking filings from lobbyists--only to hold on to them until they can pass them on to the incoming Joint Commission on Public Ethics, which is scheduled to begin operation 120 days after the legislation creating it was signed. The authorizing bill was signed by Gov. Andrew Cuomo on August 15, 2011.

The news that CPI staffers are going to report to work on Monday has confirmed suspicions among many who have been concerned about the state of JCOPE; they fear the governor’s office is not prepared to unveil New York’s new ethics watchdog and that the state will continue with a partially functioning one for a little while longer.

Although an announcement of the commission members could come today, numerous sources say they have been told by the Cuomo administration to expect an announcement on JCOPE this coming Thursday.

There might not be as much concern about the issue if Cuomo’s office had been upfront about the process of selecting commissioners and creating the infrastructure for the new watchdog. But an absolute veil of secrecy has surrounded JCOPE. Cuomo’s press office did not return multiple calls over the span of weeks about the issue of JCOPE, and legislators—all except the highest ranking--seem to be either indifferent or in the dark on what is going on with the new agency.

Cuomo has made legislating look easy. This year, he has reached deals with a legislature once thought to be too disparate to be led. Deals that crossed party lines and partisan ideology--a bill legalizing same-sex marriage, a budget deal, an overhaul of the state’s tax code--all came together faster than most simple and less contentious deals usually do in Albany. The governor even got the legislature to agree on an overhaul of the state’s ethics watchdog—one that gave the governor most of the power and requires unprecedented disclosure from legislators.

Cuomo may be a master of the legislative deal in Albany, seemingly snapping his fingers and manifesting consensus and action, but on ethics reform the substance of the legislation that was agreed to and passed has not come together nearly as tidily as did the deal itself.

Cuomo signed the legislation on August 15, making the current ethics watchdog partly obsolete; the Commission on Public Integrity has existed since August with a only skeleton crew, which has been charged with taking in complaints and lobbyist registrations and storing them until JCOPE takes over. According to the law as most good government groups read it, CPI will cease to exist 120 days after the law was signed and JCOPE will take its place. That date is December 12. But things may not be that simple.

Legislative sources say all houses of the legislature have selected their appointments for the Joint Commission on Public Ethics. "We have our people, and I think we will announce it in a timely fashion when governor’s office is ready," said Senate Majority Leader Dean Skelos on Wednesday.

But other legislators aren’t so sure an announcement is imminent or don’t seem to care. Albany Assemblyman Jack McEneny said he wasn’t paying much attention. "I’ve seen a lot of these commissions come and go,” he said. I’m sure somebody is worrying about it." A slew of other legislators shrugged, dismissed JCOPE as "The governor’s deal." Some asked that I let them know if I find out anything.

When asked if he expected an announcement on Monday, Senate Minority Leader John Sampson, said he wasn’t sure and asked what the governor’s office had said.

The Cuomo administration responded to questions from the Gazette in late October only to say that they saw no obstacles to meeting the 120-day deadline.

But sources close to the Cuomo administration say it is the administration’s position that the CPI will continue to exist until JCOPE is named. What that means exactly is unclear. Will current staffers keep their jobs? Will their website continue to collect and post registrations from lobbyists?

The law states: "The JCOPE shall be fully operational on or before the 120th day after this act shall have become a law and until such time as it becomes operational (a) the state CPI shall deposit all records in its possession with the inspector general and (b) the LEC shall continue to exercise such functions, powers, obligations and duties to be transferred to the JCOPE;â€¦"

Representatives of good government groups are reluctant to say the Cuomo administration’s apparent interpretation of the law is exactly wrong, but they are also reluctant to say it is right. "I need to look at the law again closely to see if there is something I missed," said Russ Haven of the New York Public Interest Research Group.

Dick Dadey, executive director of Citizens Union (Gotham Gazette is published by Citizens Union Foundation the sister organization to the Citizens Union) said that he is not concerned if there is a gap of a few days between the end of CPI and the start of JCOPE. "I expect the governor will apply the law and meet the required deadline," said Dadey adding. “A couple days won’t hurt.”

But David Grandeau, former head of the Public Integrity Commission, the ethics watchdog that existed before former Gov. Eliot Spitzer overhauled New York’s ethics watchdog agency, does not think the law—especially when it comes to ethics issues--should be taken lightly. Grandeau’s blog features a countdown clock that tracks the time until JCOPE’s “official” start date. The clock is complemented by a picture of three monkeys—one covers its ears, one covers its mouth, and the other its eyes. "Countdown clock sponsored by the goo goos. Non vedo, non sento, non parlo," reads the quote above the picture.

“Dadey says the rationale behind the delay was that the agency had to be built from the ground up,” writes Grandeau. â€CPI was essentially a merger between two state agencies into one. This effort is essentially tearing down a house and starting from scratch. We accepted that explanation and we look forward to seeing a strong new house,’” he writes, quoting from a previous Gazette article on JCOPE. Then he directly addresses Dadey: "Hey Dick about that house I think you are going to need a tent at this point because the closing is next week and nothings built."

“And when it comes to missing deadlines do you think the new JCOPE will let the lobbyists be a couple of days late with their filings? remember when it comes to ethics â€A couple days won’t hurt.””

Both Dadey and Haven think that part of the reason for the struggle and the veil of secrecy around JCOPE may have to do with difficulty getting the commitment of qualified and talented people to serve on the commission.

“It seems they [the Cuomo administration] are scrambling to lock people in. With the spotlight that has been on the CPI for the last four years it might be less attractive to some folks. But we really hope they look outside of the usual suspects—connected lawyers and the like.”

“It is difficult to find people who don’t have connections. I’m not surprised it has been a struggle given the restriction on membership,” said Dadey.

Good government groups have faced criticism by observers and insiders alike for not pushing harder on Cuomo to make the process of putting JCOPE together more public and for commending the ethics deal that allowed the state to go without a fully functional ethics watchdog since August.