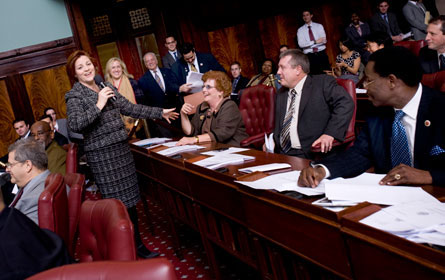 Photo by William Alatriste
Christine Quinn at a Council meeting this past November.

In December, the Council overrode a mayoral veto of the Outsourcing Accountability Act. Last week, Council Speaker Christine Quinn announced that she’d orchestrated a truce between business interests and unions over the Living Wage bill — another piece of legislation Mayor Michael Bloomberg has threatened to veto. Today, the Council passed more bills that will curb unfair parking tickets — after the Council overrides a mayoral veto, that is.

The first bill, Intro 490, gives Traffic Enforcement Agents the ability to cancel tickets immediately if presented with a muni-meter ticket time-stamped within 5 minutes of the ticket being issued, which Councilman James Vacca called "gotcha" tickets. The mayor has said he will veto this bill, but the Council can override it.

“It increases the likelihood of on-street confrontations with Traffic Agents and creates a system that is ripe for abuse,” Mayoral Spokesman Marc LaVorgna said, explaining the planned veto.

The reformatting of traffic agent devices to cancel tickets on the spot would cost between $200,000 and $250,000 dollars and take approximately 180 days to implement.

The second bill passed today as part of the “Fair Parking Legislative Package” will stop late fees from being issued while a driver is appealing the ticket and the last will stop the city from placing stickers on cars “purportedly violating alternate side parking rules.”

The Mayor has not completed reviewing the sticker bill, according to LaVorgna, though Councilmembers seemed confident on Wednesday that he would veto the bill.

Quinn spoke passionately about the sticker bill, recounting when she had received a bright orange adhesive sticker years ago on her car for violating the alternate side-parking rules.

Some 400 tickets are affixed to cars each day and getting that “scarlet letter for drivers” was “extremely embarrassing,” Quinn said, adding that the measure is punitive and that when the city attempted to explain, it “was not really able to present a sound rational for why these stickers are necessary.” Unlike tickets, she noted, the stickers are placed on cars before drivers are given a chance to prove their innocence.

“The city testified against [lead sponsor Councilman David] Greenfield’s bill and there was no logical reason [for their opposition] — their reasoning was almost nonexistent,” said Councilman Vacca.

Under the new law, drivers will still receive tickets for violating alternate side parking laws, but stickers won’t be affixed to the cars. According to Quinn, this measure will save the city money as they don’t have to pay for the stickers or send city workers to paste them to cars.

The city rakes in approximately 600 million a year in revenue from parking tickets; it is unclear how these bills would affect that revenue, but Quinn said that the purpose of enforcement is to get people to obey the laws, not to raise revenue.

The Balance of Power

Taking his own stand against the Mayor, Councilman Jumanne Williams introduced a charter amendment bill that would aim to alter mayoral control.

"We're looking to rebalance the power in New York City; this is a bad balance of power. The mayoralty has way too much power," Councilman Williams explained to Gotham Gazette.

The bill would alter who appoints the Conflict of Interest Board. COIB’s five members are currently all appointed by the Mayor, but under the proposed legislation only three members would be appointed by the mayor. The Public Advocate and the Comptroller would each appoint an additional member, with advice and approval of the Council. The change would be subject to a referendum and is part of a package of bills that Councilman Williams is preparing and hopes will rebalance the power in the city between the Mayor and the Council. One, on which Councilman Williams is collaborating with Councilman Garodnick, would address the Mayor's control over the budget.

"The Mayor has just way too much power when it comes to deciding the revenue estimate — he can modify the budget in ways that he doesn't have to go through the Council," he said.