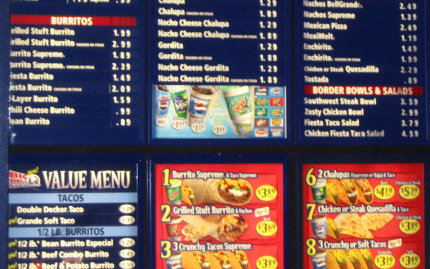 With a Big Mac checking in at 540 calories and a medium order of fries at 380, healthy fast food may seem like the ultimate oxymoron. But that has not kept New York City officials from trying to regulate consumption of fast food chicken, fries and tacos for some 18 years. Their efforts, though, have had only mixed success.

In 1990, City Council first started debating plans that would require fast food outlets, which today make up about 10 percent of the city's approximately 20,000 restaurants, to post nutrition facts. A series of almost identical bills flickered in and out of City Hall until 1998, when the subject was finally dropped.

Mounting concern over the so-called "obesity epidemic," prompted city officials to take another look at New York's Taco Bells, McDonald's and KFCs. In December 2006, members of the Board of Health voted to force some fast food restaurants and restaurant chains to provide calorie counts on their menus. The board also banned the use of transfats, which have been found to raise cholesterol and increase a person's risk for heart disease, in every New York City restaurant from Burger King to Bouley. This decision followed a Food and Drug Administration rule introduced in January 2006, requiring food manufacturers to include information about transfat content on labels.

There was some grumbling over the transfat ban. A representative of the Heart Association, for example, wondered whether it would force restaurants to substitute other equally unhealthy substances, and some restaurant owners expressed fear that moving away from the artificial cooking oil could raise costs and reduce flavor.

Despite such concerns, the health department has reported widespread compliance with its rule. The health department found that 94 percent of the restaurants it inspected in the first three months of the ban had stopped using transfats for frying or as spreads. (The restaurants have until July 1, 2008 to stop using the fats in baked goods or to fry dough or cake batter.) "Despite claims to the contrary, New York City restaurants have shown that it's easy to get artificial transfats out of spreads and fry oils," health commissioner Thomas Frieden said in September.

"We removed all transfats in 2007 and the products are still high quality and taste great," said Starbucks spokeswoman Tara Darrow.

Efforts to persuade fast food restaurants to post calorie content, though, have proved more difficult. The Board of Health's December 2006 order only applies to restaurants that already provided the calorie counts on Web sites or in some other public place. It would have covered about 10 percent of the city's restaurants, mainly large chains with standardized menu offerings.

In June 2007, the New York State Restaurant Association sued the Board of Health to block the rule. The group said the mandatory posting infringed on the businesses' First Amendment rights, because it would have forced restaurant operators to say something against their will. The trade group said that restaurants that had previously provided their nutrition information in a brochure or on a Web site were being unfairly punished by having to list their calorie counts on menus and wall posters, since the restaurants that never offered that information were absolved of the requirement. The association also claimed that the law violated the Food and Drug Administration's 1990 Nutrition Labeling and Education Act, which specifically exempted restaurants from having to label their food with nutrition facts. Hearing the arguments, Judge Richard Holwell of U.S. District Court in Manhattan threw out the law in September 2007.

This January, pushed on by Mayor Michael Bloomberg and Health Commissioner Thomas Frieden, the Board of Health voted for another, slightly modified version of the calorie-listing law. It would require every fast food and chain restaurant -- not just ones that already offer calorie counts -- to list calories as prominently as prices by March 31, 2008. The New York State Restaurant Association sued again, arguing the revised rule still violates the restaurants' freedom of speech and is preempted by federal requirements.

In a phone interview, Rick Sampson, president and chief executive officer of the Restaurant Association, questioned the efficacy of providing calorie content. "For the last 17 years," he said, "the FDA has required every packaged food to list nutrition info right on the box, but still, obesity is at an all-time high."

To counter that, Sampson called for more public education about healthy eating habits aimed at children and their parents. "The restaurants have sat down with the commissioner about this, but he will not listen," Sampson said. "We would like to make even more nutrition information available, like the amount of sodium in the food, but that won't fit on a menu board and the commissioner will accept nothing but posting calories on a menu board," he said.

The health department, though, argues that it is the restaurant association that is being intransigent. "We had hoped that the restaurants would work with us to address these pressing concerns of obesity and diabetes," said Sabrina Baronberg, deputy director for physical activity and nutrition. "Unfortunately, it seems they'd rather go to court than put calorie information where their customers can use it and see it.

She believes labeling will work. "When people have access to calorie information, they use it," Baronberg said. About three quarters of consumers say they look at calorie information on packaged foods in supermarkets, and about half say that nutrition information affects what they choose to buy."

Healthy or not, millions of New Yorkers eat fast food. And so, the health department and industry critics say, restaurants bear some responsibility for the obesity epidemic. "Studies show that eating out contributes to obesity and people are eating out more often," said Margo Wootan, director of nutrition policy at the Center for Science in the Public Interest. "Americans are getting about one third of their calories from eating out. We've gotten used to having nutrition labels on our packaged foods, and Americans want this information when eating out."

According to Wootan, posting the calories online, on hidden posters near the bathrooms or on the under-side of tray liners, as many restaurants do, are not helpful. "You don't see Burger King listing their prices over by the restroom," she said. "And if people have time to go home, log on to the Internet and study a Web site before they go out to eat, they'd just stay home and cook dinner."

And so the battle rages on. Will New Yorkers improve their health and change their eating habits as a result of the rule?

Baronberg sees a huge impact. "We think that this regulation could reduce the number of people who suffer from obesity by 150,000 over the next five years, preventing more than 30,000 cases of diabetes," she said.

Others, such as Morgan Downey, executive vice president of the Obesity Society, are more cautious. "Definitive scientific studies are not available" on whether posting calorie content "will reduce or lessen the prevalence or impact of obesity," Downey said. "Nonetheless, the Obesity Society believes that more information on the caloric content of restaurant servings, not less, is in the interests of consumers."