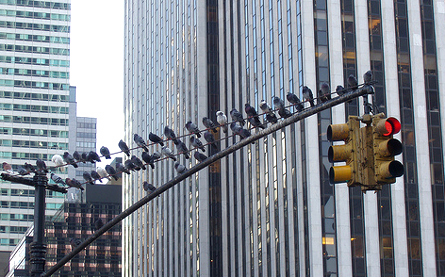 About 1 million pigeons make their homes in New York City mating for life, nesting on windowsills, swooping down for scraps of food and leaving droppings on the shoulders of hapless pedestrians.

Feelings about animals always run high (see the recent furorover the trial of a Texas bird lover who killed a cat), and the New York City pigeon has been a polarizing influence since it started taking over our cement landscape centuries ago. You either love 'em, or you hate 'em. You either find feeding them a therapeutic experience or duck for cover when one swoops by your head making a beeline for the remnants of a falafel.

But the actual threat these winged city dwellers pose remains open for debate. Some animal advocates claim they carry no risk, while several city officials say the pigeon threatens the health, public safety and quality of life of all New Yorkers.

City Councilmember Simcha Felder of Brooklyn has no doubt pigeons pose a hazard. He has released a report contending that pigeon droppings can host a number of communicable diseases, such as ornithosis, encephalitis, Newcastle disease, cryptococcosis, toxoplasmosis, salmonella food poisoning and histoplasmosis. To confront this threat, he wants to create a "Pigeon Czar" to oversee the fight to contain the birds.

Felder also wants to ban the feeding pigeons, a proposal that sparked discussions from Chicago to China. The ban could carry a $1,000 fine for violators (the council member has since said the $1,000 is not set in stone, but that any penalty must be hefty enough to make a difference).

"We came up with what I think is a very humane solution to the issue of the pigeon population," said Felder. "For those people that love to feed pigeons, they should do so on their own properties."

Felder has offered several other proposals to control the pigeon population from contraceptives to locked trashcans with smaller openings. Keeping food off the streets and making trash inaccessible to the pigeons, Felder said, would have the greatest effect.

"A husband says to a wife, 'You want to go out tonight?'" Felder said of pigeon couples. "And instead of going to Radio City Music Hall, they go to a trashcan around the corner."

Felder's feeding legislation will probably be formally introduced in December. He said he is "confident" it will pass by the summer.

But some city officials have expressed reservations. When Council Speaker Christine Quinn was asked whether she would support Felder's pigeon proposal she replied: "I am not a fan of pigeons. I have no love of pigeons at all. I find them to be flying rats, and I have no use for them. I don’t want to comment on the legislation, and I will not let my personal pigeon position impact my professional pigeon position, which I will be taking later upon review of the pigeon possibilities in the legislation, and that’s my full use of alliteration for the day."

That irritated at least one New York City animal rights group, which likened comparing pigeons to flying rats to using a racial epitaph.

A number of other city legislators also have concerns about pigeons.

At the Staten Island Ferry Terminal, pigeons reportedly snatch away breakfasts and defecate on commuters, who already have to deal with daily trips that can include bus, boat and rail. This caught the attention of City Council Minority Leader James Oddo.

"The insult on top of that injury is to be standing there in the heat and the cold having a pigeon crap on you," said Oddo. "I don’t care about pigeons. I care about the people underneath the pigeons. The people that literally have to duck and weave and bob for the simple right to go to work."

Last month, he urged the Department of Transportation to consider feeding contraceptives to the birds. Oddo said the state Department of Environmental Conservation is considering the idea, and he expects approval early next year.

In Queens, the birds have honed in on the Amtrak overpass in Astoria - another site where passersby get slimy surprises from hidden nests above. City Councilmember Peter Vallone of Astoria, chair of the Public Safety Committee, recently asked Amtrak to consider hanging a net to protect pedestrians. He said the pigeon droppings, which can contain corrosive chemicals like ammonia, may cause structural damage to the overpass.

The anti-avian proposals have some bird lovers and other members of the pro-pigeon population up in arms, or rather wings.

"I'd like to ask these council people or these people that run our government in the city, I would like to know is your goal to get rid of pigeons?" asked Anna Dove (she reportedly changed her name from Kuglemas), the founder of the New York Bird Club, which boasts 60 members. The group is planning a rally to protest the pigeon legislation on the steps of City Hall on Nov. 30.

Pigeons, said Dove, are not the dirty, disease-carrying animals many people believe them to be.

For now, the city's Department of Health and Mental Hygieneagrees with Dove, at least in part. The department said pigeons pose no risk to the general public.

Though those who work among a "large quantity" of pigeon droppings could be exposed to "some risk," city dwellers merely cleaning their homes or windowsills should not fret, according to the health department.

Several national animal rights groups, including the American Society for the Prevention of Cruelty to Animals, support Felder’s measures. People for the Ethical Treatment of Animalshas also expressed support for pigeon control programs as long as the birds’ food supply is not cut off entirely.

"PETA does support reducing the pigeon population for the bird's own sake," said Michael McGraw, a spokesperson for PETA. "I don’t think anyone disagrees there are many more pigeonsâ€¦ It's worth remembering that it's not the pigeons’ fault they are here and that they're hungry."

According to the city health department, pigeon feeding currently is not prohibited, but it is discouraged. The department said the seed, bread or other leftovers can draw in less-sanitary urban wildlife, like rats (see related story).

According to a spokesperson from the Department of Sanitation, throwing food on any street or in any park falls within the city's littering laws. Enforcement, though, has been a challenge for the department.

The health department will not take a position on Felder's proposal until the actual bill is introduced.

With the recent spate of pigeon proposals, some New Yorkers might question whether city officials' time can be better spent.

"I know cynics and critics like to scoff and mock, and people out there are saying, 'Aren’t there more important things to worry about than pigeons?'" said Oddo, who successfully championed a measure restricting aluminum baseball bats. "I don’t care about pigeons. I care about people that are commuting on the Staten Island Ferry who have to literally avoid being defecated on on a daily basis."

The pigeon predicament has turned into a divisive issue. On the City Room blog, one reader stated: "A $1,000 fine is the minimum any pigeon feeder should have to pay for fouling our sidewalks and parks with these disease-ridden flying rodents."

But Dan Stackhouse disagreed. “The iridescent purple/green sheen on a pigeon’s neck is beautiful and mystified me as a kid. Carrier pigeons have won more Medals of Honor for animals than any other animalâ€¦ Pigeons always try to get out of our way and never harm us except by the dreaded disrespect from above, which is not really their fault,” he wrote. “If these pigeon-hating politicians can’t come up with better things to say about rats, then I suggest they work on the rat problem first."

So maybe pigeons are misunderstood â€“ or just unfairly pigeonholed.Â