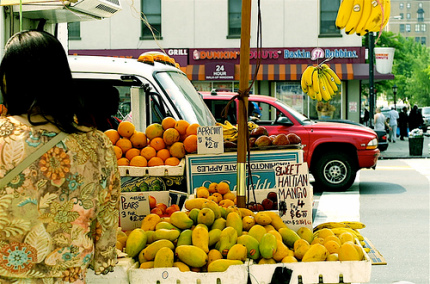 For critics of the green cart legislation, the issue is more about protecting small business than promoting healthy eating. Here are some highlights of the opponent's arguments. (Some of these comments have been adapted from press releases, official comments or letters opposing the bill.)

The proposal to add "Green Carts" as a means to address and improve the consumption of fruits and vegetables in certain parts of the city will do little if anything to address the eating habits of those residents that this bill identifies and candidly will reduce the quality of perishable food products to them.

One thing is very clear. These are not underserved markets. In every area cited there are full service supermarkets, It is naive to believe that by putting a vegetable stand on a corner people will instantly change their eating habits.

On most corners today there are street vendors where the traffic warrants them. Most sell snacks, hot dogs, etc. They sell these items because this is what sells. If consumers wanted produce from these vendors and there was a demand for it, the entrepreneurial spirit that exists in this city would more than amply respond to the need.

The carts will not end up in a deserted area of the South Bronx. These stands will end up in front of our stores where there is traffic to support them. This alone defeats the purpose of the stand.

The education of these targeted residents will go much further to improving their eating habits than the introduction of more pushcarts. If produce pushcarts were in demand they would already be in place in the streets of New York City.

Phasing in 1,500 -- now 1,000 -- additional green carts into neighborhoods with serious under-consumption and poor access of healthy produce items to improve public health is a myopic solution.

Built-in unhealthy diet patterns, the fundamental cause of the health problem, must be changed through a long-term, protracted educational campaign by the government, health food advocates, schools and shopkeepers in cooperation. The bill puts the supply cart in front of the demand horse.

As children we learned that an apple a day keeps the doctor away, but we never questioned where that apple would come from or how much it might cost.

While some New Yorkers enjoy the "luxury" of a grocery store just down the block, many low-income families live far from any place to buy healthy, high-quality produce at affordable prices. Hundreds of thousands of New York City residents live in neighborhoods with no supermarket, no green grocer and no farmers market. Families must go to great lengths to purchase food outside their neighborhoods or make do with what corner bodegas supply -- largely canned and boxed goods.

No wonder the New York City Department of Health and Mental Hygiene found that 12 percent of adults in some neighborhoods ate no fruits or vegetables on a daily basis. As one would expect, the existence of these "food deserts" throughout the city has a devastating impact on the health and waistlines of New Yorkers.

According to the health department, about 500,000 children citywide are obese and at risk of developing life threatening diseases - diabetes, heart disease, and high blood pressure - as adults. Life expectancy in some poor communities is eight years shorter than in wealthier neighborhoods, such as the Upper East Side or the West Village. While various factors lead to these problems, research has shown that a diet lacking fresh fruits and vegetables is among the major contributors.

To begin to address this public health crisis, children and families in all New York City neighborhoods must have access to fresh affordable produce. Poor, hard-working families across the city shouldn't have to tackle multiple subway lines, buses or cab fares after work or on the weekend in order to purchase high quality fruits and vegetables at prices they can afford. Rather, families everywhere - in Melrose, Harlem, Bedford-Stuyvesant, Bushwick, Jamaica, Corona and Willowbrook - need healthy food options, at reasonable prices, where they live.

A Cart Around the Corner

Help is finally on the way. Thanks to Mayor Michael Bloomberg and City Council Speaker Christine Quinn's "Green Carts" initiative, families even in places without good grocery stores soon will be able to purchase affordable fresh fruit and vegetables conveniently, and on a regular basis, where they live.

The recently passed green cart legislation will create 1,000 new licenses for vendors to sell fruits and vegetables in neighborhoods that have high rates of obesity and diabetes, and where consumption of fresh produce is low.

While this may not be legislation that will change New York City's food landscape forever, it provides a new solution to the age-old problem of how to provide all neighborhoods - particularly those with a desperate need - access to healthy affordable food. The green carts initiative can be implemented quickly and will have a broad reach in the city's poorest communities.

The food industry is a powerful lobby, and it had engaged in an all-out fight to derail this legislation. Despite the fact that carts will operate where supermarkets and other fresh food outlets don't exist, the industry argued that the carts will create unfair competition. If only that were true -- there would have been no need for green carts.

Ideally, every neighborhood would have a grocery store or supermarket within walking distance of the majority of its residents. Supermarkets relieve a neighborhood's food deficit, anchor a community and provide good stable jobs. For decades, communities have been lamenting the lack of such stores - especially when other neighborhoods have lavish food outlets on every corner.

The city is studying how to lure supermarkets and green grocers back to our communities, and we're optimistic this will eventually mean more grocery stores where they are needed most. The increased presence of a once or twice-weekly greenmarket would also be a major improvement in neighborhoods lacking options.

But waiting for the perfect answer ignores the immediate healthy dangers these children and families across our city face. It would be the equivalent of arguing that until we have a perfect health care system, people should not seek treatment at all.

Our city's low-income children and families cannot afford to wait three, five or 10 years to get better access to fresh produce. While we hope for supermarkets and farmer's markets in the future, we need to be able to buy apples and bananas for snacks today, and green beans and salad greens for dinner tonight. Lives literally depend on it.

We are looking forward to seeing these carts in neighborhoods all over the city, where for the first time in decades, hundreds of thousands of families will be able to conveniently buy fresh produce. And at the same time, we will continue to support the mayor and the City Council in their efforts to develop more supermarkets and farmer's markets and improve the capacity of existing grocers to sell fresh produce at prices New Yorkers can afford.